Two possibilities exist to explain how any road trip from Auburn, Alabama to Gainesville, Florida passes through the tiny (pop. 683) town of Plains, Georgia: (a) you are way lost or (b) you really want to go there. For Pretty and me yesterday, it was a little bit of both.

For most of my life, I’ve traveled with a Road Atlas the size of a very large paperback book bound with plastic spirals – the kind with each state on one big page (or two if it’s Texas) and the most obscure county roads shown on the maps as well as the state highways and interstates with the little numbers in red or blue showing the distance from one town to another. As a matter of fact, I used one so much in the past five years, it disintegrated and I had to throw it away last year.

No need for another one, said Pretty, since we have all directions in our GPS cyberspace maps now. The GPS knows where we are and if we know where we want to go, a pleasant brilliant woman tells us how to get there. This is, indeed, a fine system as long as we know exactly where it is we want to go.

If, on the other hand, we are on a road trip without a specific agenda and only a vague idea of where Gainesville is in relation to Auburn, I personally would prefer a Road Atlas to get the general lay of the geography before I strike out. But, then, we might have missed our detour to Plains. 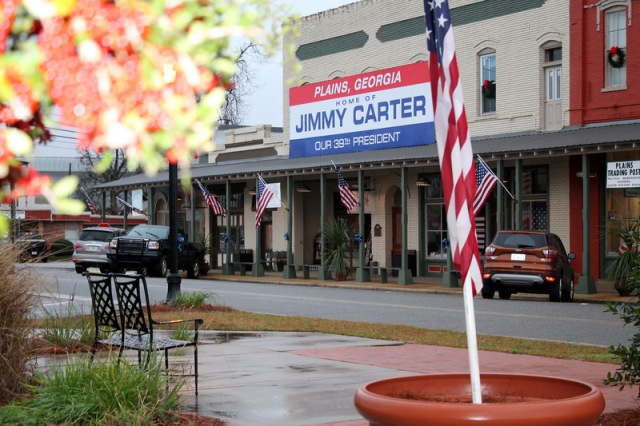 Plains is the home of President Jimmy Carter

Pretty and I have visited Plains two other times and when we found that our GPS navigator sent us east of Columbus, Georgia yesterday through the peanut farming country, we remembered we were near Plains and decided to take a detour to visit again. The brilliant woman told us just how to get there.

Plains is one main street – no stop light 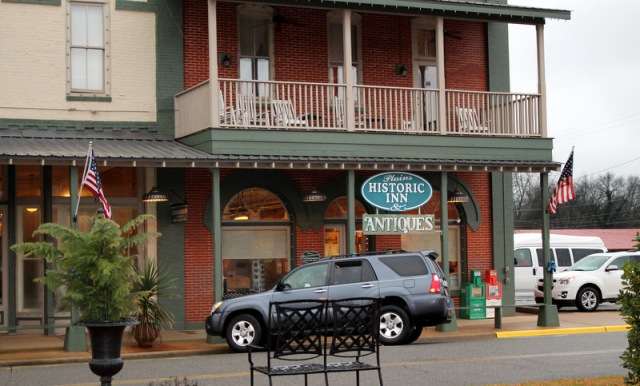 One Historic Inn with Antiques

(note the one vehicle parked in front – ours)

Pretty walked through the store while the dogs walked me and my camera outside in the drizzle. 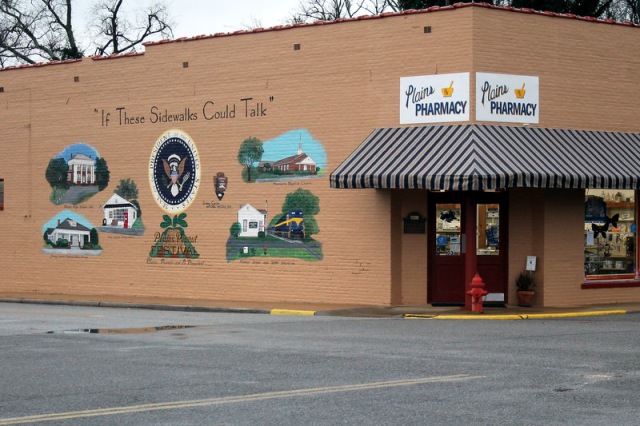 Not much going on at the Plains Pharmacy, either

Hey, but don’t worry about business in Plains because this weekend former President Jimmy Carter will be teaching his Sunday School class at the Maranatha Baptist Church, and the Plains Historic Inn is full… with a waiting list, thank you very much. People still come from all over the world to hear this peanut farmer who became the 39th. President of the United States in 1976 and chose to come home to live where he grew up when he left the White House in 1981.

My love for the Carters is no secret, but I had to marvel again yesterday as we wandered around Plains, at the simple country school house and the memory of “Miss Julia,” the school superintendent who told those little peanut farmers’ children that one of them could grow up to be President of the United States one day – and one did.

And so are we. We did make it to Tallahassee last night…and will use our GPS to find our way to Gainesville today.

Sheila Morris is a personal historian, essayist with humorist tendencies, lesbian activist, truth seeker and speaker in the tradition of other female Texas storytellers including her paternal grandmother. In December, 2017, the University of South Carolina Press published her collection of first-person accounts of a few of the people primarily responsible for the development of LGBTQ organizations in South Carolina. Southern Perspectives on the Queer Movement: Committed to Home will resonate with everyone interested in LGBTQ history in the South during the tumultuous times from the AIDS pandemic to marriage equality. She has published five nonfiction books including two memoirs, an essay compilation and two collections of her favorite blogs from I'll Call It Like I See It. Her first book, Deep in the Heart: A Memoir of Love and Longing received a Golden Crown Literary Society Award in 2008. Her writings have been included in various anthologies - most recently the 2017 Saints and Sinners Literary Magazine. Her latest book, Four Ticket Ride, was released in January, 2019. She is a displaced Texan living in South Carolina with her wife Teresa Williams and their dogs Spike, Charly and Carl. She is also Nana to her granddaughter Ella James born 10-01-2019. Born in rural Grimes County, Texas in 1946 her Texas roots still run wide and deep.
View all posts by Sheila Morris →
This entry was posted in Personal, politics, Random, Reflections and tagged georgia, lady gamecocks basketball team, plains, president Jimmy carter. Bookmark the permalink.