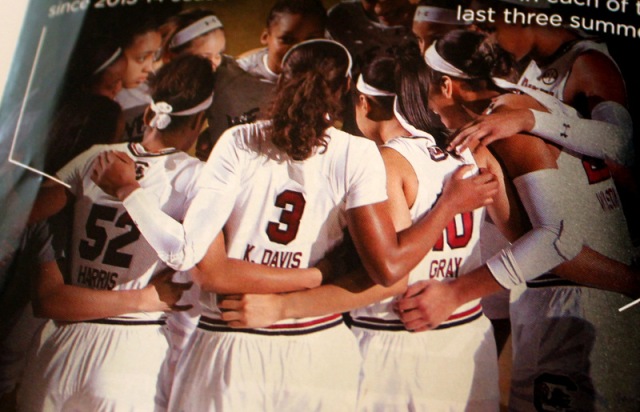 Okay, my daddy always told me, She who tooteth not her own horn, the same shall not be tooteth. Here’s my horn, and I’m tooting it today…

IN THE MIDDLE OF MARCH MADNESS!!

Gamecock basketball fans can’t figure out where to make their Final Four reservations this week – the men are going west to Phoenix and the women to Dallas for the final weekend of March Madness in 2017. Question: How much “madness” can the University of South Carolina stand in one wild, wacky, wonderful basketball year? And the answer is Ding, Ding, Ding the Daily Double – both teams are Regional Road Warriors and Winners.

As PJ Dozier said at the Welcome Home celebration for the men in Columbia Sunday at the Colonial Life Arena,  Gamecock Fans, Show me your Fours!

The names Sindarius Thornwell, Notice, Silva, Dozier, A’ja Wilson, Davis, Gray, Cuevas-Moore, Harris, Cliney are household words in the homes of South Carolina fans who revere the round ball and will now take their deserved places in Gamecock basketball lore as they have led their respective teams into the record books for the school and the SEC as well.

Congratulations to # 22 A’ja Wilson, the junior from Hopkins, South Carolina who was named to the All American 1st Team. The honor couldn’t be more well-deserved because Wilson has been not only the spark plug for the spirit of the team but also the checkered flag- waver to help her team stay focused to cross the finish line of every game this season whether on the bench or on the game floor. This girl has spunk, and I love spunk. You go, girl.

Last night Pretty and I plus our dogs Spike and Charly who had been rescued from the Doggie Day (and night) Care in New Orleans stayed in Patchatoula, Louisiana off I-10 to see if our women were Final Four bound. And so they are, and so we will continue our love affair with Coach Dawn Staley and her team and turn west toward Texas to make sure we are there to support them in person this final weekend of the season.

Whatever the scoreboard says in Dallas or in Phoenix, our young women and men are winners and for us personally have provided more than enough entertainment to lift our family from a self-absorbed political pity party we have had since November. For that, we say a huge thank you and good luck in the next games.

P.S. I couldn’t believe we would leave New Orleans without once hearing When the Saints Go Marching In and Sunday night at the very last possible minute, a wedding party parade outside our hotel had a very loud band playing the song while everyone danced in the streets. Magical moment. Memory Maker, as Granny Selma would have surely said.

Pretty documented it for us

Sheila Morris is an essayist with humorist tendencies who periodically indulges her desires to write outside her genre by trying to write fiction and poetry. In December, 2017, the University of South Carolina Press published her collection of first-person accounts of a few of the people primarily responsible for the development of LGBTQ organizations in South Carolina. Southern Perspectives on the Queer Movement: Committed to Home will resonate with everyone interested in LGBTQ history in the South during the tumultuous times from the AIDS pandemic to marriage equality. She has published five nonfiction books including two memoirs, an essay compilation and two collections of her favorite blogs from I'll Call It Like I See It. Her first book, Deep in the Heart: A Memoir of Love and Longing received a Golden Crown Literary Society Award in 2008. Her writings have been included in various anthologies - most recently the 2017 Saints and Sinners Literary Magazine. Her latest book, Four Ticket Ride, was released in January, 2019. She is a displaced Texan living in South Carolina with her wife Teresa Williams and their dogs Spike and Charly. Her Texas roots are never far from her thoughts.
View all posts by Sheila Morris →
This entry was posted in Life, Reflections, sports, The Way Life Is and tagged a'ja wilson, allisha gray, bianca cuevas-moore, chris silva, coach dawn staley, dallas, duane notice, final four in dallas, final four in Phoenix, kaela davis, pj dozier, sindarius thornwell, ty harris, university of south carolina men's basketball team, university of south carolina women's basketball team. Bookmark the permalink.