Faster than a speeding bullet, more powerful than a locomotive…it’s a train, it’s a plane, it’s Super Manic Monday at Wimbledon tomorrow and my head will be spinning like one of those old antique tops that we recently sold at our spectacular yard sale for Casa de Canterbury this weekend.

Roger Federer in 2012 following his win

I lost at Wimbledon again – why me, o Lord, why me? 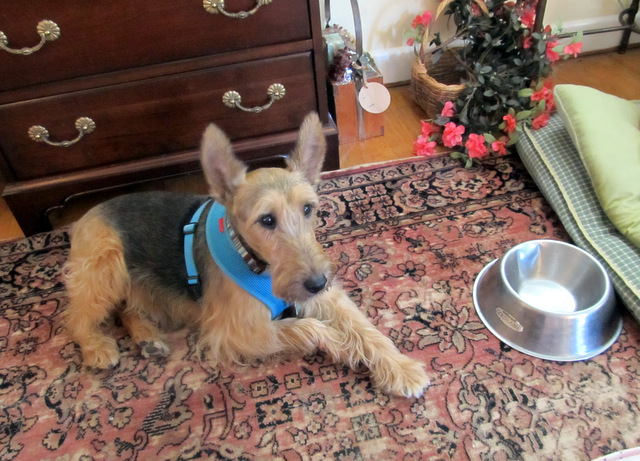 The Red Man in the bleacher seats at

Casa de Canterbury during Wimbledon in 2012

(The Red Man was a serious Tennis Addict) 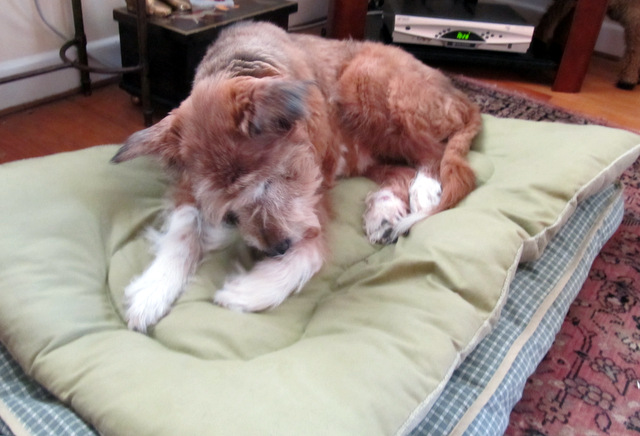 Paw Licker Annie entertained herself in 2012…

(she much preferred licking her paw to tennis)

he didn’t quite catch the thrill in 2012 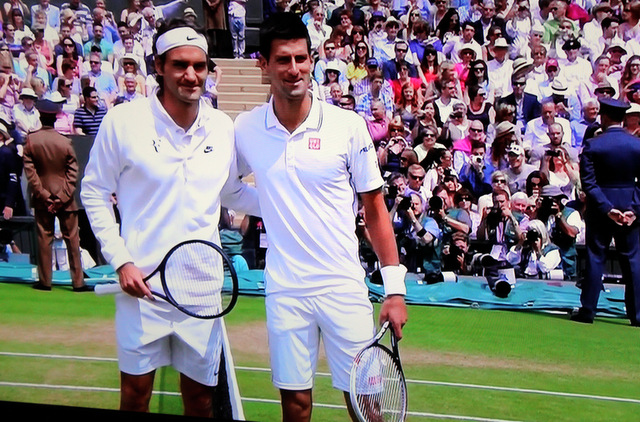 Roger Federer and Novak Djokovic in 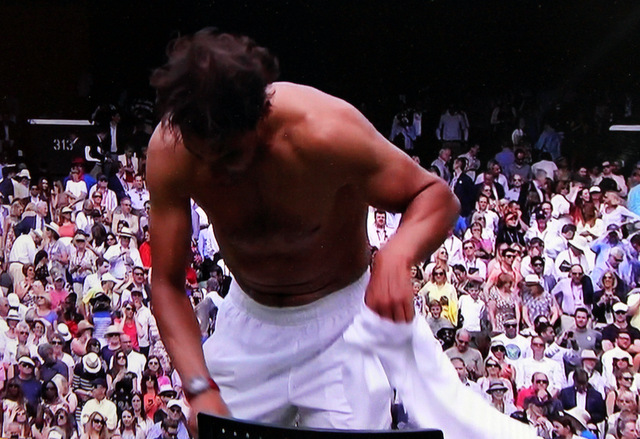 Nadal, Federer, Djokovic and Murray a/k/a the Big Four will be flailing away at yellow tennis balls again tomorrow at the All England Club at Wimbledon in the round of 16 players still standing in both the men’s and women’s draws after the first week of tournament play. The ESPN commentators have dubbed this day Manic Monday because it is the final time both the men and women will be playing on the same day on the grass courts of the 2017 tournament.

With the yard sale in her rear-view mirror, Pretty will be up with me to catch the Magic Marathon that is the beginning of the second week of one of the 4 Major tennis tournaments of 2017. Roger Federer  won the Australian Open earlier this year, and Rafa Nadal won his record-setting 10th. French Open title a few weeks ago.  His 10th. French Open. Truly awesome.

These guys are “oldies but goodies” as my friend Robin Lee says whenever she sees me.

That’s how I feel about the men and women who continue to loom large in international competition even as they pass the 30-year-old hurdle that used to be the sign of the end of times for tennis players. Good for them. They crash their own glass ceilings every time they step on Centre Court. And we haven’t even mentioned the legendary Venus Williams who is playing in her 20th Wimbledon at the ripe young age of 37. You go, girl.

Spike has grown fonder of tennis in the past 5 years and will watch Wimbledon with Pretty and Charly and me in our new bleacher seats at Casita de Cardinal this week. We have to hope The Red Man and Paw Licker Annie will have the best seats in their home away from home, too. Red will pull for Roger with Pretty, and Annie, well, she will keep her preferences to herself.

Spike and I both love Nadal whether he has a shirt on or not. Vamos!!

Enjoy a fantastic week of tennis if you are a fan and have access to sports channels on your TV.

Thanks for staying tuned.

Sheila Morris is a personal historian, essayist with humorist tendencies, lesbian activist, truth seeker and speaker in the tradition of other female Texas storytellers including her paternal grandmother. In December, 2017, the University of South Carolina Press published her collection of first-person accounts of a few of the people primarily responsible for the development of LGBTQ organizations in South Carolina. Southern Perspectives on the Queer Movement: Committed to Home will resonate with everyone interested in LGBTQ history in the South during the tumultuous times from the AIDS pandemic to marriage equality. She has published five nonfiction books including two memoirs, an essay compilation and two collections of her favorite blogs from I'll Call It Like I See It. Her first book, Deep in the Heart: A Memoir of Love and Longing received a Golden Crown Literary Society Award in 2008. Her writings have been included in various anthologies - most recently the 2017 Saints and Sinners Literary Magazine. Her latest book, Four Ticket Ride, was released in January, 2019. She is a displaced Texan living in South Carolina with her wife Teresa Williams and their dogs Spike, Charly and Carl. She is also Nana to her granddaughter Ella James born 10-01-2019. Born in rural Grimes County, Texas in 1946 her Texas roots still run wide and deep.
View all posts by Sheila Morris →
This entry was posted in Humor, Life, Personal, photography, Slice of Life, sports, The Way Life Is and tagged andy murray, novak djokovic, rafa nadal, roger federer, Wimbledon tennis championships. Bookmark the permalink.

4 Responses to Manic Monday at WIMBLEDON Tomorrow – Feel the Magic!