The cover of my third book features a family snapshot of my favorite Aunt Lucille who was my daddy’s sister, her daughter Melissa, my mother and daddy, and me. 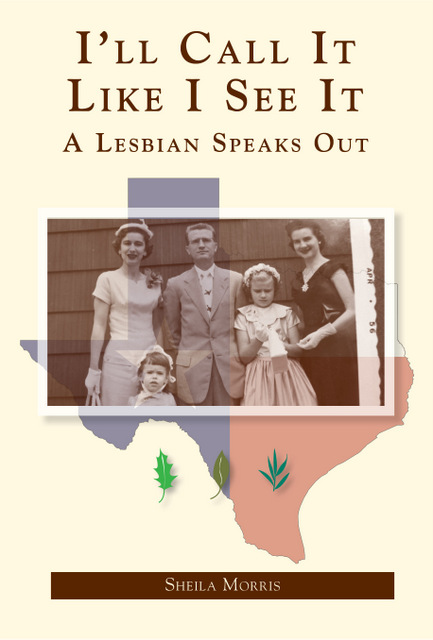 I am the child fiddling with my gloves and not looking at the picture-taker, whoever that might be. Probably my Uncle Jay who was my Aunt Lucille’s husband and my first cousin Melissa’s father. He liked to take pictures and had the most impressive camera of anyone in our family so naturally he was the photographer for important occasions like Easter Sunday.

I was ten years old at the time of the photo, and I’m assuming it was a picture taken right before we went to church for an Easter service at the Richards Baptist Church in Richards, Texas the little town in Grimes County at the edge of the piney woods. Population 500 counting dogs and chickens.

My mother looked happy – no doubt because she managed to dress me in a ruffled dress, Easter bonnet and, reluctantly, white gloves. My daddy is the one with the crew cut, which I’m sure I secretly envied.

My Aunt Lucille is the beautiful woman wearing an appropriate corsage with her Easter outfit that included gloves, handbag and hat. Melissa was probably two years old and apparently not too thrilled with either her Easter outfit, the photographer’s efforts, or a combination of irritations as we prepared to go to church that day. She’s the pretty little girl with the frown.

I love this picture – and I love the people in it.

Time, distance and the vicissitudes of life, as my daddy used to say, make it difficult to keep in touch with my cousin Melissa who is the only one remaining in this picture besides me. She lives in San Leon, Texas with her husband Tim and their three dogs. San Leon is a small town on Galveston Bay past Houston if you’re driving south toward the Gulf of Mexico and the Galveston beaches. Regardless of where you’re driving, Melissa and Tim live a thousand miles from Pretty and me in South Carolina.

But today she was in Charleston with Tim who was there on a work assignment and we had made plans to get together. Pretty wanted to take me, but she was still in the business of the final push to clear out Casa de Canterbury since the new owners brought a big ol’ moving van up to the porch today and started unloading. That’s a convoluted story for another day but needless to say, Pretty was overwhelmed with no opportunity to drive me to Charleston at this point in our lives.

In (and up) stepped my good friend Dick Hubbard who happily agreed to drive me to see my cousin Melissa for an early lunch at her hotel today. Bless his heart. Dick and I have been friends for 30 years but usually meet for lunch in Columbia so we enjoyed the extra time to visit on the two-hour ride down to Charleston and back. Gossip,  the meaning of life, his husband Curtis,  my wife Pretty, pickup trucks were a few of our topics as we drove in a slight drizzle…just enough to require his new windshield wipers every once in a while.

The visit with Melissa was perfect. We caught up on two years’ worth of current events in our lives since we last saw each other in Texas in the summer of 2015. We talked politics, books, retirement, what Tim was doing, how Pretty was doing – but mostly we talked about the other three people in the book cover picture who are no longer here and how much we both miss them.

Melissa and I share the solitude of being “only children” and what that means when we have lost our parents and grandparents. Neither of us has children of our own – Melissa’s daughter died many years ago of cystic fibrosis.

But today was a joyful day because we could talk together about the people we both knew and loved when we were growing up: we are each other’s people after all. Sixty-five years of family history are ties that will always bind us, regardless of the years between visits or the distance of a thousand miles that separate us today. Thank goodness for facebook.

Both of us actually knew the people we were talking about; and that’s a happy thing, as Melissa likes to say.

This was an extra special Tuesday for me, a day I won’t forget anytime soon…until we meet again.

Melissa and her playhouse in Beaumont, Texas

Sheila Morris is a personal historian, essayist with humorist tendencies, lesbian activist, truth seeker and speaker in the tradition of other female Texas storytellers including her paternal grandmother. In December, 2017, the University of South Carolina Press published her collection of first-person accounts of a few of the people primarily responsible for the development of LGBTQ organizations in South Carolina. Southern Perspectives on the Queer Movement: Committed to Home will resonate with everyone interested in LGBTQ history in the South during the tumultuous times from the AIDS pandemic to marriage equality. She has published five nonfiction books including two memoirs, an essay compilation and two collections of her favorite blogs from I'll Call It Like I See It. Her first book, Deep in the Heart: A Memoir of Love and Longing received a Golden Crown Literary Society Award in 2008. Her writings have been included in various anthologies - most recently the 2017 Saints and Sinners Literary Magazine. Her latest book, Four Ticket Ride, was released in January, 2019. She is a displaced Texan living in South Carolina with her wife Teresa Williams and their dogs Spike, Charly and Carl. She is also Nana to her granddaughter Ella James born 10-01-2019. Born in rural Grimes County, Texas in 1946 her Texas roots still run wide and deep.
View all posts by Sheila Morris →
This entry was posted in Lesbian Literary, Life, Personal, photography, Reflections, Slice of Life, The Way Life Is and tagged book cover for i'll call it like i see it, easter sunday. Bookmark the permalink.

17 Responses to an extra special Tuesday