One of my favorite heroes was a woman named Edie Windsor who died yesterday at the age of 88. I never had an opportunity to meet her personally, but I know what my family and my community owe her. She helped give a boost to push the journey to marriage equality across the finish line through her refusal to give up on justice for all.

Well, I never.  No, really, I never.  Today’s decision by the Supreme Court of the United States to give equal federal treatment to same-sex marriage in the twelve states and District of Columbia that recognize these marriages is a stunning pivotal day in our nation’s history of constitutional revelation.  I honestly thought this day was my dream to be realized in a future generation…

And while I understand the significance of this ruling for our country and for the message it sends around the world to other nations about American civil liberties, today the political became personal.

I have many personal heroes during the past twenty years of my activism in South Carolina – both sung and unsung.  I am grateful to all of them for the labor we’ve made together in the days before Will and Grace and afterwards.

But today is Edith Windsor day for me.  I will forever remember the petite 84-year-old lesbian from New York who changed the course of history with an outrageous act and a not-so-everyday rebellion.  Thank you, Edie.

Earlier this year (February 1, 2017) I again wrote about Edie Windsor; here are excerpts:

But today I want to give you some good news that is my way of saying thank you for the journey you took for marriage equality in the LGBT community. The Supreme Court ruling in June, 2013 for your case the United States v. Windsor has been described as “the most influential legal precedent in the struggle for LGBT marriage equality.” The dominoes of discrimination against us began to topple and fall after that ruling and before you could say two shakes of a lamb’s tail, my partner Teresa and I were the first same-sex couple to be granted our marriage license in November, 2014 in Richland County, South Carolina – the 35th. state to recognize equality…

Yet, this weekend, in the midst of an unbelievable national wave of hatefulness and exclusion, my wife and I went to a shower for two young lesbians who are getting married next month – a natural next step in their belief for the pursuit of happiness as they see it. It was a festive fun evening with the usual “games” for the brides-to-be, great southern barbecue with all the trimmings, a special Signature Cocktail (which I can personally endorse) and champagne for everyone.

What made this particular shower different, however, was that the hosts were eleven straight couples with a plus one…all of them friends of the parents of one of the brides-to-be. The parents of both brides were there, and everyone celebrated the upcoming nuptials. As I mingled and talked with our friends who were the hosts, I felt I was in a different universe from the one where I didn’t dare to dream about marrying another girl when I was growing up in rural southeast Texas in the 1950s. It was if a magic carpet had transported me from a land of ignorance to a place of enlightenment. Truly remarkable.

And so I wanted to share this joyful time with you, Edie, because you are one of the major reasons these two young women have the same hopes and dreams for their family that their straight friends do.

Believe me when I say you were there in spirit. They may not even realize who you are and what you have done for them, but I want to simply say “I do,” and I’m forever indebted. 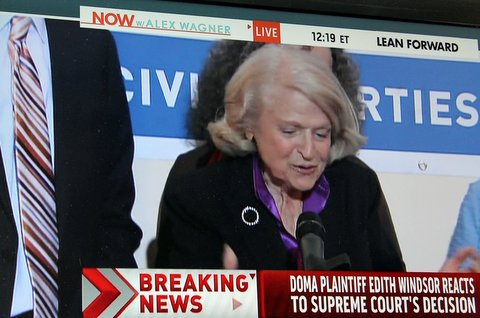 Sheila Morris is a personal historian, essayist with humorist tendencies, lesbian activist, truth seeker and speaker in the tradition of other female Texas storytellers including her paternal grandmother. In December, 2017, the University of South Carolina Press published her collection of first-person accounts of a few of the people primarily responsible for the development of LGBTQ organizations in South Carolina. Southern Perspectives on the Queer Movement: Committed to Home will resonate with everyone interested in LGBTQ history in the South during the tumultuous times from the AIDS pandemic to marriage equality. She has published five nonfiction books including two memoirs, an essay compilation and two collections of her favorite blogs from I'll Call It Like I See It. Her first book, Deep in the Heart: A Memoir of Love and Longing received a Golden Crown Literary Society Award in 2008. Her writings have been included in various anthologies - most recently the 2017 Saints and Sinners Literary Magazine. Her latest book, Four Ticket Ride, was released in January, 2019. She is a displaced Texan living in South Carolina with her wife Teresa Williams and their dogs Spike, Charly and Carl. She is also Naynay to her two granddaughters Ella and Molly James who light up her life for real. Born in rural Grimes County, Texas in 1946 her Texas roots still run wide and deep.
View all posts by Sheila Morris →
This entry was posted in Lesbian Literary, Life, Personal, politics, Reflections, Slice of Life, The Way Life Is and tagged edie windsor, marriage equality. Bookmark the permalink.