The finals of the US Open tennis tournament in New York City earlier this month were bittersweet matches for me. Sweet because my all-time favorite tennis player Rafael Nadal from Spain won his second major tournament in 2017 on the men’s tour when he added the US Open title to his 10th. French Open title at Roland Garros earlier this year, but bitter because the end of tennis on Arthur Ashe court at the Billie Jean King tennis center in Flushing Meadows meant the end of my television tennis season. Bummer.

Not so fast, my friend.

Enter the Laver Cup in Prague this weekend – three days of competition between six of the best European men players against six of the rest of the world’s best male players in a team format designed for speedy matches and awesome entertainment. Tennis Channel commentator Paul Annacone remarked that this team tennis concept transcended traditional tennis and could create a new model for future events.

Gosh, I hope so. I watched all three days of the matches live which meant I got up for my jet lag time zone of 6:00 a.m. start times while Pretty snoozed. Pretty loves to watch tennis, too, but she’s happy to watch the DVR recordings at a more appropriate time, i.e. anytime after 9 o’clock in the morning.

The World team members included John Isner, Sam Querry and Jack Sock from the USA, Denis Shapovalov from Canada, Nick Kyrios from Australia; they were coached by the always unpredictable, highly excitable tennis legend John McEnroe who brought along his younger brother Patrick as his assistant. Patrick’s major task presumably was to try to keep John out of trouble, but he had about as much success with that as General Kelly has with keeping DT out of trouble. Patrick probably had a lot more fun, though.

The European team included the aforementioned Nadal, Alexander Zverev from Germany, Dominic Thiem from Austria, Marin Cilic from Croatia, Tomas Berdyche from the Czech Republic and one of the event’s organizers, Roger Federer, from Switzerland. Their team was coached by another living tennis great Bjorn Borg whose calm restrained presence coaching Team Europe was the perfect antidote for the fiery outbursts of World Captain McEnroe –  Borg doubtless remembered Mac’s tirades only too well from the days when they played singles against each other almost 40 years ago.

Interestingly, the players on each team mirrored the character of their coaches – the World Team players on the bench were full of energy, pranks, visual antics and obviously having great fun when they watched their teammates competing. Team Europe was equally enthusiastic on the court, but their court-side behavior was much more suited for the Golf Channel. Golf claps galore.

The Tennis Channel made the mistake of putting a hot mike on Coach McEnroe on Day 2 of the matches but had to reel it back in when Johnny Mac could be heard clearly advising one of his players  to “go out there and knock his dick off” at a particularly heated teachable moment in one of his coaching opportunities. Alrighty then. Mike drop.

The highlight of the matches for Pretty and me, however, was a doubles match that featured our two favorite guys respectively, Federer and Nadal, playing together on the same side of the net for the European team, against Sam Querry and Jack Sox  representing the World team. For us plus every other Roger and Rafa fan everywhere, this was the tennis version of a Dream Team in action. 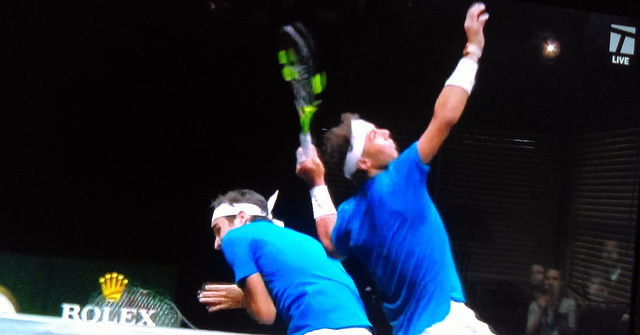 Not everything went as planned

that was funny, right?

The point scoring for the matches changed daily so that regardless of overall matches won by each team, the drama continued into Sunday and the Laver Cup came down to a singles match between Nick Kyrios and who else? Roger Federer. Federer won in a third-set tiebreak that had as much entertainment value for me as a Wimbledon final – well, maybe not quite that much – but more than I would have thought possible when it started on Friday. 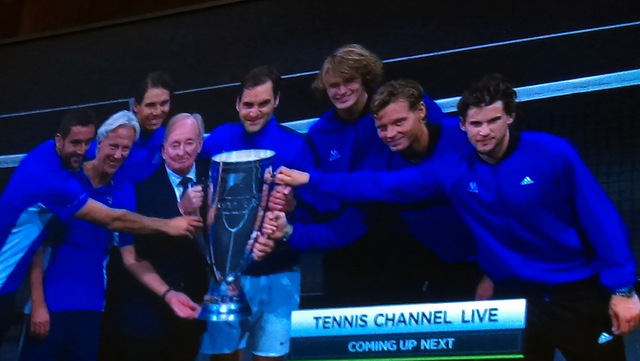 Original Rocket Man Rod Laver presented the first trophy to the European team. Laver is the only person to possess all 4 major titles in a calendar year (the calendar slam), and he accomplished this remarkable feat two times…once as an amateur and once as a professional tennis player. The organizers of the Laver Cup established this tournament to celebrate his achievements and his legacy and can take a bow for its initial success in Prague.

Next year’s Laver Cup moves to Chicago in the USA. Hopefully tennis fans will be treated to another brilliant weekend of creative play with the World Team holding more of a home court advantage. Do not curb your enthusiasm! 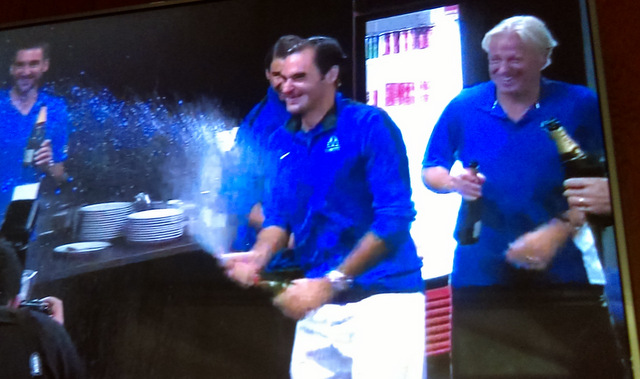 Too much fun. Stay tuned.

Sheila Morris is a personal historian, essayist with humorist tendencies, lesbian activist, truth seeker and speaker in the tradition of other female Texas storytellers including her paternal grandmother. In December, 2017, the University of South Carolina Press published her collection of first-person accounts of a few of the people primarily responsible for the development of LGBTQ organizations in South Carolina. Southern Perspectives on the Queer Movement: Committed to Home will resonate with everyone interested in LGBTQ history in the South during the tumultuous times from the AIDS pandemic to marriage equality. She has published five nonfiction books including two memoirs, an essay compilation and two collections of her favorite blogs from I'll Call It Like I See It. Her first book, Deep in the Heart: A Memoir of Love and Longing received a Golden Crown Literary Society Award in 2008. Her writings have been included in various anthologies - most recently the 2017 Saints and Sinners Literary Magazine. Her latest book, Four Ticket Ride, was released in January, 2019. She is a displaced Texan living in South Carolina with her wife Teresa Williams and their dogs Spike, Charly and Carl. She is also Nana to her granddaughter Ella James born 10-01-2019. Born in rural Grimes County, Texas in 1946 her Texas roots still run wide and deep.
View all posts by Sheila Morris →
This entry was posted in Humor, Life, Personal, Reflections, Slice of Life, sports, The Way Life Is and tagged berdyche, cilic, denis shapovolov, jack sock, john and patrick mc enroe, john isner, Laver Cup, nick kyrios, rafael nadal, roger federer, sam querry, team Europe, team world, thiem, zverev. Bookmark the permalink.