Following the shady corruption of power in the Nixon administration, the American people were ready for a newcomer outside the beltway of Washington, D. C. In walked Georgia Governor Jimmy Carter, a peanut farmer from Plains, who was a Sunday School teacher in a Baptist church with a reputation for honesty and integrity. He was just the recipe needed in the 1976 election after the Watergate years.

I had followed and admired Jimmy Carter even before his run for governor in 1970 so I was hopeful for what his administration could accomplish from the White House. Alas, being an outsider must be much more difficult  than I thought, and for Jimmy and Rosalyn Carter it was a mountain too high to climb. The many good measures he accomplished including the Camp David Accords were often lost in the rhetoric surrounding the hostages in Iran that were released on the day Ronald Reagan took office at the end of Carter’s one term.

Jimmy Carter was only 56 years old when he left the Oval Office for his home in Plains, Georgia, but he and his wife Rosalyn have continued to be advocates for the poor and disenfranchised since he returned home. In 2002 he won the Nobel Peace Prize for his open resistance to the War in Iraq in addition to his countless contributions toward creating and preserving democracy around the world. The Carter Center has been a model for presidential libraries, a thriving institution whose motto is “Waging Peace, Fighting Disease, Building Hope.”

During the last years President Carter not only wrote a number of books but also found a passion for painting. Pretty and I are always grateful for the Christmas cards we faithfully receive every year from Rosalyn and Jimmy Carter, and we are particularly happy whenever the cards are works of art by the former president. 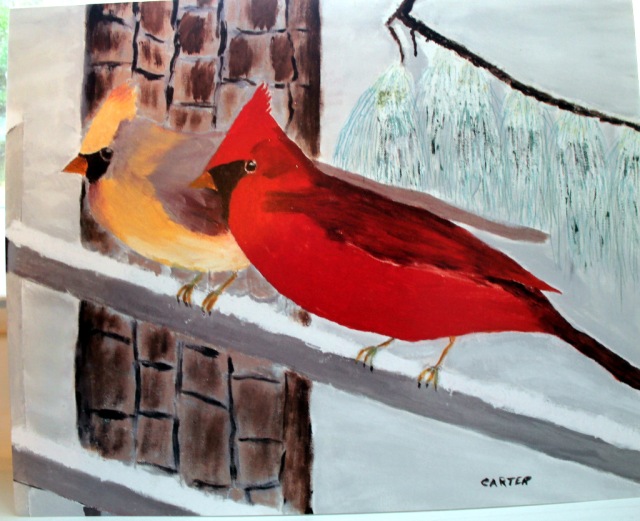 2018 message: Blessings, love, and peace to you this Christmas 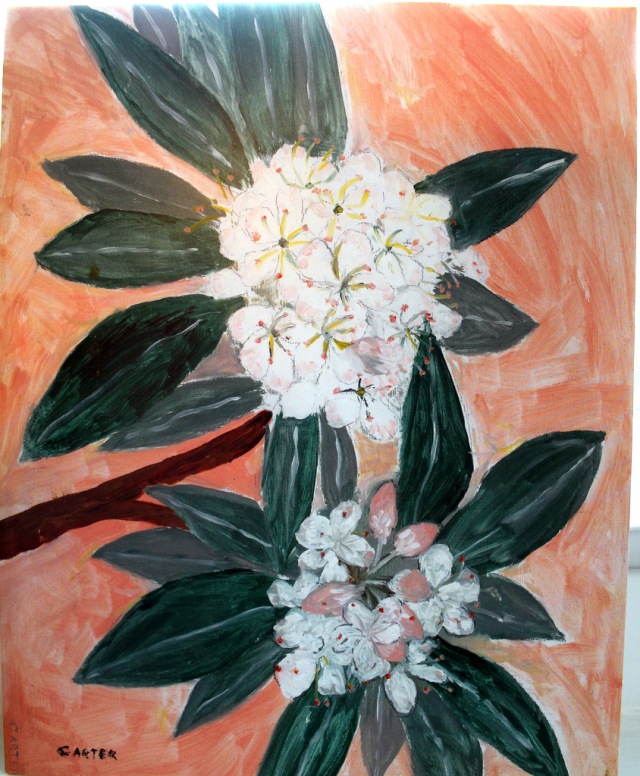 2017 message: May the Joy and Peace of Christmas be with you now

and throughout the new year 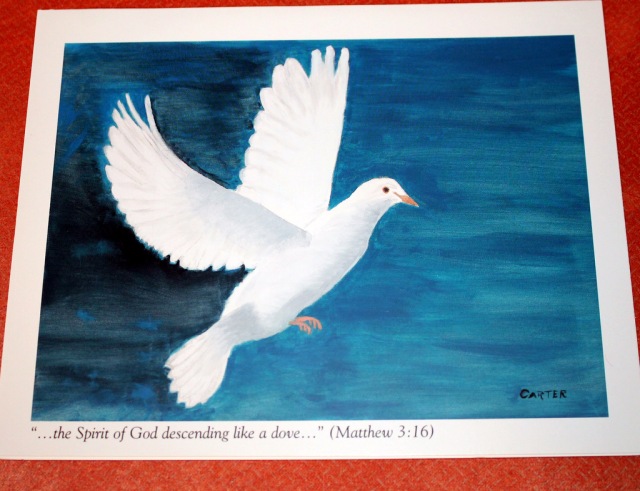 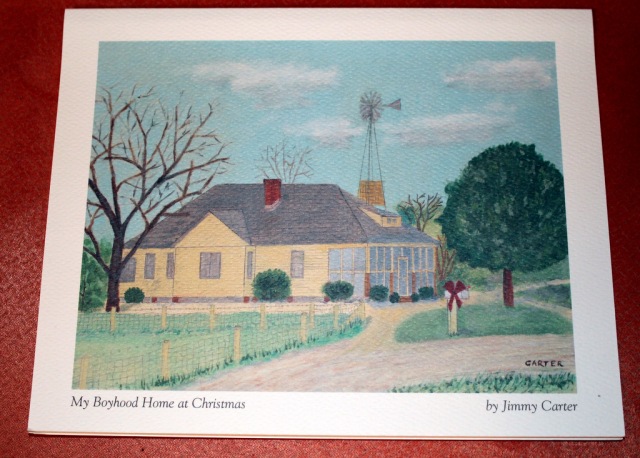 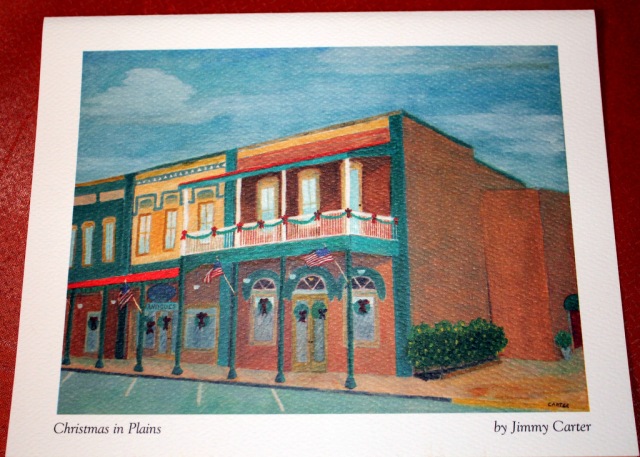 And finally, just for fun, this one designed by Amy Carter who “created this original painting of her with her father carrying a Christmas tree home from the woods.” 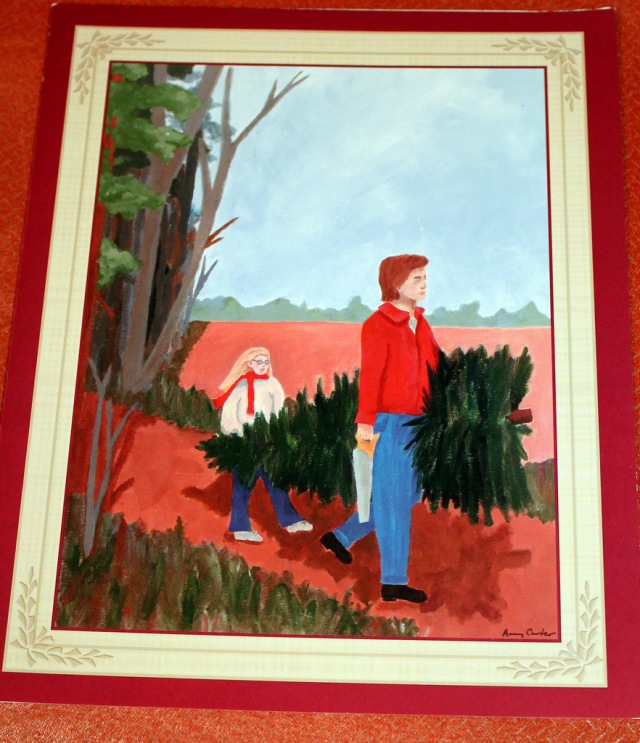 Message: May your home be filled with the warmth of family and friends

this holiday season and throughout the New Year

I couldn’t have said it better myself.

Sheila Morris is an essayist with humorist tendencies who periodically indulges her desires to write outside her genre by trying to write fiction and poetry. In December, 2017, the University of South Carolina Press published her collection of first-person accounts of a few of the people primarily responsible for the development of LGBTQ organizations in South Carolina. Southern Perspectives on the Queer Movement: Committed to Home will resonate with everyone interested in LGBTQ history in the South during the tumultuous times from the AIDS pandemic to marriage equality. She has published five nonfiction books including two memoirs, an essay compilation and two collections of her favorite blogs from I'll Call It Like I See It. Her first book, Deep in the Heart: A Memoir of Love and Longing received a Golden Crown Literary Society Award in 2008. Her writings have been included in various anthologies - most recently the 2017 Saints and Sinners Literary Magazine. Her latest book, Four Ticket Ride, was released in January, 2019. She is a displaced Texan living in South Carolina with her wife Teresa Williams and their dogs Spike and Charly. Her Texas roots are never far from her thoughts.
View all posts by Sheila Morris →
This entry was posted in Lesbian Literary, Life, Personal, photography, politics, Reflections, Slice of Life, The Way Life Is and tagged cards from President Jimmy Carter, holiday greeting cards, president Jimmy carter. Bookmark the permalink.

10 Responses to the Jimmy and Rosalyn Carter holiday card collection