which anniversary is this? better ask Pretty

fun with friends at DeBordieu, 2007

So Pretty and I are having dinner with our friends Nekki and Francie after the South Carolina women’s basketball game last night, and the conversation turned to our anniversary which is this Saturday, February 9th. I had invited them to go to dinner with us on our anniversary but that wasn’t working out so we opted to eat after the game.

Nekki asked what everyone always asks about anniversaries – how many years are you celebrating?

Nineteen, I answered quickly because I am the numbers person in our family who keeps up with birthdays, anniversaries, weddings, graduations, etc. Every family has a designated scorekeeper, and in our family I am known as the go-to person for important dates. Pretty is generally unreliable in these areas.

Oh, Nekki said, nineteen years is really great. Pretty and I both nodded, although I noticed Pretty displayed a hint of eyes rolling at my answer. Then she said, no, it’s not nineteen, it’s eighteen to which I responded no I specifically remember the year was 2001 when we got together so anyone could plainly see our anniversary was definitely for nineteen years. Case closed, I added for emphasis.

For those of you who can do “high math,” I will let you do the numbers or you don’t really need to bother because February 09, 2019 is our 18th. anniversary, and don’t you forget it. Please enjoy a few highlights of the past “on the road to nineteen” with us.

signing copies of Committed to Home at Francis Marion – 2018 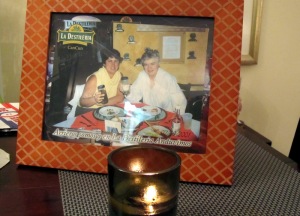 Happy Anniversary, Pretty – how do I love thee? I can’t begin to count the ways…or the years evidently…but my love will always belong to you. Thank you for every day. Case closed.

Sheila Morris is an essayist with humorist tendencies who periodically indulges her desires to write outside her genre by trying to write fiction and poetry. In December, 2017, the University of South Carolina Press published her collection of first-person accounts of a few of the people primarily responsible for the development of LGBTQ organizations in South Carolina. Southern Perspectives on the Queer Movement: Committed to Home will resonate with everyone interested in LGBTQ history in the South during the tumultuous times from the AIDS pandemic to marriage equality. She has published five nonfiction books including two memoirs, an essay compilation and two collections of her favorite blogs from I'll Call It Like I See It. Her first book, Deep in the Heart: A Memoir of Love and Longing received a Golden Crown Literary Society Award in 2008. Her writings have been included in various anthologies - most recently the 2017 Saints and Sinners Literary Magazine. Her latest book, Four Ticket Ride, was released in January, 2019. She is a displaced Texan living in South Carolina with her wife Teresa Williams and their dogs Spike and Charly. Her Texas roots are never far from her thoughts.
View all posts by Sheila Morris →
This entry was posted in Humor, Lesbian Literary, Life, Personal, photography, politics, racism, Reflections, Slice of Life, sports, The Way Life Is and tagged alabama river riverboat, anniversaries, cancun mexico, debordieu, francis marion university, gettysburg, poinsett bridge in south carolina, south carolina pride, the hideout ranch in wyoming, university of south carolina women's basketball team. Bookmark the permalink.

18 Responses to which anniversary is this? better ask Pretty