To say my mom and I had a complicated connection is an understatement. What I am grateful for, however, is that neither of us ever gave up on the other; and occasionally we set aside our differences, however briefly, to share a common interest. Like, for example, the George Bush Presidential Library in College Station, Texas. I found these pictures she had saved from a rare combo family experience fifteen years ago that triggered a flood of emotions as I went back in my memories to a time when Pretty and I made one of many visits to Texas to see my mother (this one after we had been together four years),  a time when none of us knew my mom was three years away from living in a Memory Care Unit in Houston, a time when we all agreed visiting the Bush Library together would be fun.

I had a higher than usual anxiety level planning the trip of nearly a hundred miles from Mom’s home in Richmond, Texas to the Bush Library in College Station. After all, my mother, my wife and I would be in the rental car I had picked up at the airport in Houston – close quarters for the day trip. I needed everything to go off without a hitch, but a hitch was waiting for me. The rental car had a flat tire just 40 miles up the road.

Pretty and Mom all smiles when we discovered the flat

Smiles turned to frowns while we waited for roadside assistance,

but eventually we were back on the road to College Station 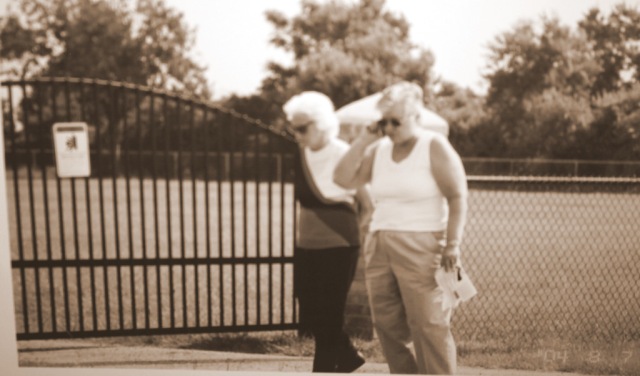 so we spent time wandering the grounds outside 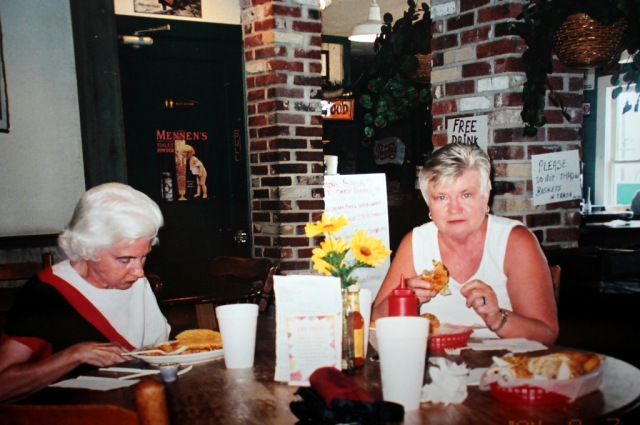 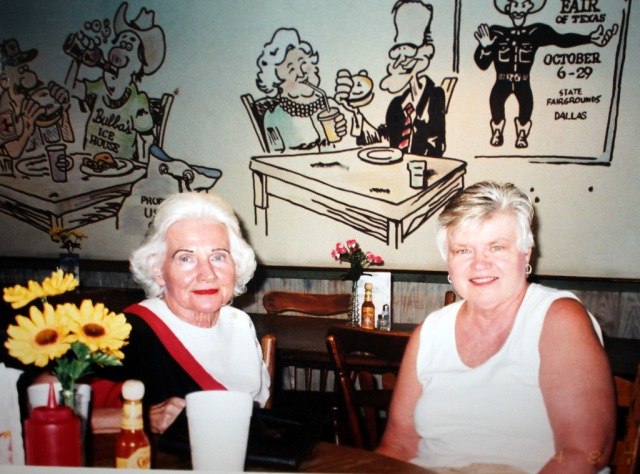 Although neither Pretty nor I would ever say the George Bush Presidential Library made our library favorites list, the road trip was a memory maker, as my mother would say.

The future belongs to those who refuse to put aside the past; you can quote me on that.

Sheila Morris is an essayist with humorist tendencies who periodically indulges her desires to write outside her genre by trying to write fiction and poetry. In December, 2017, the University of South Carolina Press published her collection of first-person accounts of a few of the people primarily responsible for the development of LGBTQ organizations in South Carolina. Southern Perspectives on the Queer Movement: Committed to Home will resonate with everyone interested in LGBTQ history in the South during the tumultuous times from the AIDS pandemic to marriage equality. She has published five nonfiction books including two memoirs, an essay compilation and two collections of her favorite blogs from I'll Call It Like I See It. Her first book, Deep in the Heart: A Memoir of Love and Longing received a Golden Crown Literary Society Award in 2008. Her writings have been included in various anthologies - most recently the 2017 Saints and Sinners Literary Magazine. Her latest book, Four Ticket Ride, was released in January, 2019. She is a displaced Texan living in South Carolina with her wife Teresa Williams and their dogs Spike and Charly. Her Texas roots are never far from her thoughts.
View all posts by Sheila Morris →
This entry was posted in Humor, Lesbian Literary, Life, Personal, photography, Random, Reflections, Slice of Life, The Way Life Is and tagged college station, family excursion, george bush presidential library, texas. Bookmark the permalink.