I’ve never had any doubt about the different strengths of the women in my life, but it sure has been fun watching a team of young women who have proven their physical strength, endurance,  and mental toughness to the many fans who have had the opportunity to see them in person or have watched them on television during the 2019 – 2020 NCAA women’s basketball season. The University of South Carolina women’s basketball team has been rated Number One in the nation for the past 9 weeks. Last week they finished their regular SEC season with a perfect 16 – 0  to place first in the conference. This past weekend at Bon Secours Arena in Greenville, they won the annual SEC tournament championship as well.

If strong is the new pretty, these young women are gorgeous!

Senior leadership we will miss next year:

Mad Kiki and Chill Ty – you girls have been the best – thanks for your guts and glory! 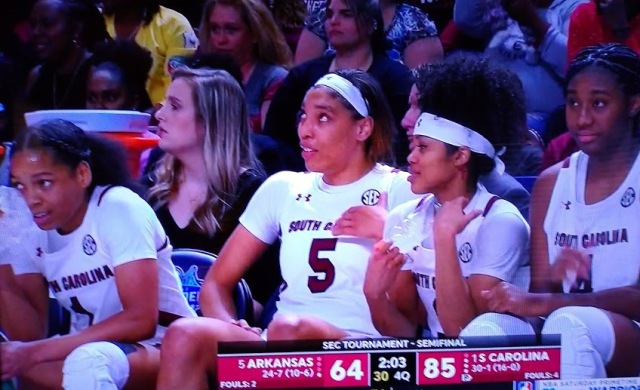 They will be back – and they’re fierce!

Winning is the most fun! 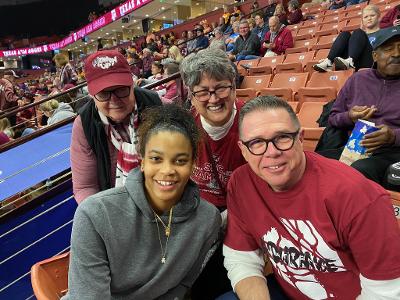 with outstanding player Lele Grissett who had a great season!

The women who make our Gamecock basketball go round:

Huge congratulations to Coach Staley and the Gamecock women’s basketball program for a wonderful  regular season. As Coach says to her players, don’t flinch now. Onward.

(Clearly, I lifted most of these pictures from ESPN’s game coverage without their permission, but the picture of Lele Grissett with her fans courtesy Brian Murrell.)

Sheila Morris is a personal historian, essayist with humorist tendencies, lesbian activist, truth seeker and speaker in the tradition of other female Texas storytellers including her paternal grandmother. In December, 2017, the University of South Carolina Press published her collection of first-person accounts of a few of the people primarily responsible for the development of LGBTQ organizations in South Carolina. Southern Perspectives on the Queer Movement: Committed to Home will resonate with everyone interested in LGBTQ history in the South during the tumultuous times from the AIDS pandemic to marriage equality. She has published five nonfiction books including two memoirs, an essay compilation and two collections of her favorite blogs from I'll Call It Like I See It. Her first book, Deep in the Heart: A Memoir of Love and Longing received a Golden Crown Literary Society Award in 2008. Her writings have been included in various anthologies - most recently the 2017 Saints and Sinners Literary Magazine. Her latest book, Four Ticket Ride, was released in January, 2019. She is a displaced Texan living in South Carolina with her wife Teresa Williams and their dogs Spike, Charly and Carl. She is also Nana to her granddaughter Ella James born 10-01-2019. Born in rural Grimes County, Texas in 1946 her Texas roots still run wide and deep.
View all posts by Sheila Morris →
This entry was posted in Humor, Lesbian Literary, Life, Personal, photography, politics, racism, Random, Reflections, Slice of Life, sports, The Way Life Is and tagged aliyah boston, coach dawn staley, coach lisa boyer, destanni henderson, kiki herbert harrigan, march madness, sec women's basketball tournament 2020, ty harris, victaria saxton, zia cooke. Bookmark the permalink.

3 Responses to STRONG IS THE NEW PRETTY: CELEBRATING MARCH MADNESS!