The Grand Slam tennis tournaments are big deals at Casa de Canterbury and this week marks the beginning of the Wimbledon grass courts championships in London, England; so Teresa and I are listening to and half-way watching the ESPN and Tennis Channel coverage of the matches from 7:00 a.m. to 4:00 p.m. daily. Wimbledon is always held the last week of June and the first week of July which signifies half of the year is gone and Christmas is only 179 days away. It feels like yesterday was New Year’s Eve and the beginning of 2016, but when Wimbledon is upon us, I can’t argue with the calendar.

Last night we watched Game Two of the College World Series in Omaha because we have a South Carolina team hanging on by a thread to play for the NCAA National Championship tonight.  The Coastal Carolina Chanticleers lost the first game of the three-game title series, but in a must-win game last night, they prevailed 5 – 4 in a fairy tale finish that signed off at midnight in our time zone. The “sugar” game as we used to call the decisive contest in a tie situation, will be played tonight and we will watch if our nerves can stand it. We will tune in to see if our version of a Cinderella team can put together the pitching and hitting necessary to win one for the Gipper, or in this case, their coach Gary Gilmore who has been coaching at Coastal Carolina for twenty-one years… a coach who took over a program that practiced and played on a baseball field covered by hole-digging moles when he was hired.

Tonight his team will play under the lights at TD Ameritrade Park in one of the most storied events  in American sports to find out if they can make his – and their- dreams come true. High drama. Great story lines.

No better story lines than the one today, though, that took place an ocean and continent away in the second round play at Wimbledon.  For a young man named Marcus Willis ranked number 772 in the world, his dreams came true as he had his day in the sun (or in this case under a closed roof) when he played the living tennis legend Roger Federer.  Willis’s road to this moment wasn’t easy. He had to win three pre-qualifying , then three qualifying matches to be admitted to the tournament where he played a first-round match Monday against a much higher-ranked opponent; he won for his seventh win in a row on the grass courts.

…on Center Court at Wimbledon

Willis’s Army – his friends who came to cheer him on

Roger easily advanced to the third round 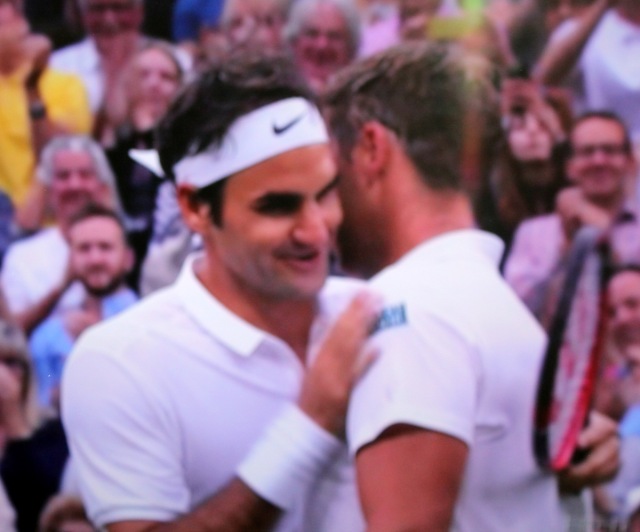 The records will read Federer defeated the Brit Willis, 6 – 0, 6 – 3, 6 – 4; but don’t ever suggest to Marcus Willis that he was a loser today.  As ESPN commentator Chrissie Evert said with a smile in the post-game analysis, “To me, this is what sports is all about…it’s about dreams coming true.” I couldn’t agree more.

Tomorrow, June 30th., the man who taught me to love sports will have been gone for forty years. I particularly remember my high school and college years when my dad and I watched anything related to sports covered by our ABC, NBC and CBS television networks in Houston, Texas. My daddy loved sports as much as anyone I’ve ever known – he was at his happiest when he saw dreams come true in a sporting event.  I miss him to this day.

Luckily, I married a woman who shares my passion for sports and the underdogs as she shares the rest of my life for better or worse. She makes my dreams come true every day, and I feel like a winner.

Sheila Morris is a personal historian, essayist with humorist tendencies, lesbian activist, truth seeker and speaker in the tradition of other female Texas storytellers including her paternal grandmother. In December, 2017, the University of South Carolina Press published her collection of first-person accounts of a few of the people primarily responsible for the development of LGBTQ organizations in South Carolina. Southern Perspectives on the Queer Movement: Committed to Home will resonate with everyone interested in LGBTQ history in the South during the tumultuous times from the AIDS pandemic to marriage equality. She has published five nonfiction books including two memoirs, an essay compilation and two collections of her favorite blogs from I'll Call It Like I See It. Her first book, Deep in the Heart: A Memoir of Love and Longing received a Golden Crown Literary Society Award in 2008. Her writings have been included in various anthologies - most recently the 2017 Saints and Sinners Literary Magazine. Her latest book, Four Ticket Ride, was released in January, 2019. She is a displaced Texan living in South Carolina with her wife Teresa Williams and their dogs Spike, Charly and Carl. She is also Nana to her granddaughter Ella James born 10-01-2019. Born in rural Grimes County, Texas in 1946 her Texas roots still run wide and deep.
View all posts by Sheila Morris →
This entry was posted in Humor, Lesbian Literary, Personal and tagged Coastal Carolina Chanticleers, college world series, marcus willis, roger federer, Wimbledon tennis championships. Bookmark the permalink.