taking this show on the road

I am deeply grateful to the South Carolina Gay and Lesbian Business Guild for inviting Southern Perspectives on the Queer Movement: Committed to Home to be the program for their January meeting, the first monthly meeting of 2018. The Guild meeting was historic for the book, too, since it marked the first public appearance of contributors to discuss their participation in the project since the book was published at the end of December, 2017. 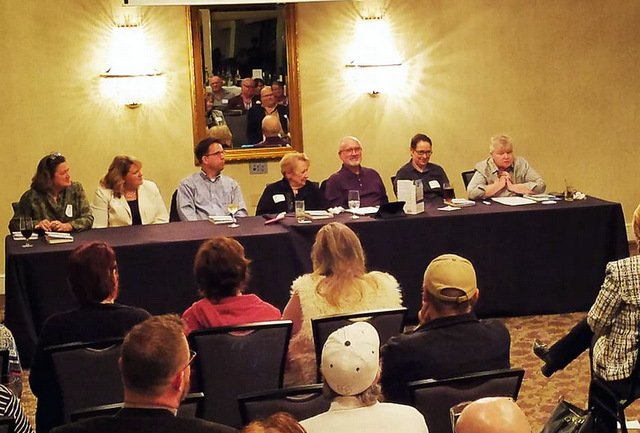 An audience of more than 50 people listened intently as Candace Chellew-Hodge discussed her reluctance to move to South Carolina from Atlanta many years ago and the subsequent transformation in her life that led to community service; Michael Haigler’s description of three years in Africa in the Peace Corps and another 20 years in San Francisco that ultimately led him home to build community in his native state; Harriet Hancock’s remarks on the impact the civil rights movement had in her life of activism that took a different course when her son came out in the early 1980s;

Ed Madden’s story of his own journey home that began in Arkansas but took him to South Carolina where he found the experience of family that his own mother and father continue to withhold because of his sexual orientation; Nekki Shutt’s experiences as an attorney who faced overt gender discrimination in her chosen legal profession that couldn’t deter her from her dogged determination to have marriage equality in South Carolina; Teresa Williams who withstood family pressures and the fear of the loss of her son as she fiercely protected her role as mother and ultimately her role as a lesbian activist.

These are six real stories – intimate accounts – of the lives of ordinary people who became extraordinary in their commitments to stay home and move their home state from an oftentimes hostile environment toward a place of true equality for all of its citizens. These six people and their amazing stories take their place along with fifteen others in the book who shared their commitment to home and their courage to fight for change… twenty-one  southern perspectives captured in one volume that supplies missing information in the overall struggle for queer rights during the turbulent 30-year period from the AIDS epidemic that characterized the 1980s through the realization of marriage equality in 2014.

I do believe that truth is stranger than fiction – and just as entertaining.

Our next public appearance will be on Monday, January 29th. at 4:30 in the afternoon on the University of South Carolina campus at the Russell House Theater. Panelists for this event are Harriet Hancock, Ed Madden, Alvin McEwen, Sheila Morris, Pat Patterson a/k/a Patti O’Furniture, and Nekki Shutt. Dr. David Snyder will be our moderator.

(Books will be available for sale and signing by contributors of books bought there or elsewhere.)

We hope you will join us as we continue to take this show on the road.

Sheila Morris is a personal historian, essayist with humorist tendencies, lesbian activist, truth seeker and speaker in the tradition of other female Texas storytellers including her paternal grandmother. In December, 2017, the University of South Carolina Press published her collection of first-person accounts of a few of the people primarily responsible for the development of LGBTQ organizations in South Carolina. Southern Perspectives on the Queer Movement: Committed to Home will resonate with everyone interested in LGBTQ history in the South during the tumultuous times from the AIDS pandemic to marriage equality. She has published five nonfiction books including two memoirs, an essay compilation and two collections of her favorite blogs from I'll Call It Like I See It. Her first book, Deep in the Heart: A Memoir of Love and Longing received a Golden Crown Literary Society Award in 2008. Her writings have been included in various anthologies - most recently the 2017 Saints and Sinners Literary Magazine. Her latest book, Four Ticket Ride, was released in January, 2019. She is a displaced Texan living in South Carolina with her wife Teresa Williams and their dogs Spike, Charly and Carl. She is also Nana to her granddaughter Ella James born 10-01-2019. Born in rural Grimes County, Texas in 1946 her Texas roots still run wide and deep.
View all posts by Sheila Morris →
This entry was posted in Lesbian Literary, Personal, Reflections and tagged sc gay and lesbian business guild, southern perspectives on the queer movement committed to home, the guild. Bookmark the permalink.

6 Responses to taking this show on the road