The Smiles Have It!

From the Williams Sisters to the Italian Sisters, the US Open tennis tournament for 2015 was an unforgettable one. The tales of not one, but two, underdogs rising to the top of their game in a twenty-four hour period inspired prime time tennis-crazed New York City on one side of the Pond and the entire country of Italy on the other.  Italian Prime Minister Matteo Renzi, the youngest Italian PM ever, and his entourage, made a whirl-wind trip  to Flushing Meadows and the Billie Jean King Tennis Center on Saturday to watch the Women’s Championship match which was the first all-Italian Grand Slam final in the Open Era.  Awesome. 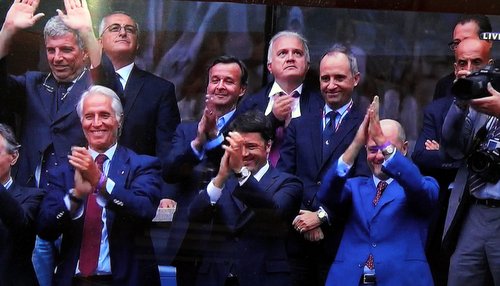 and couldn’t be happier

Roberta Vinci and Flavia Pennetta were long shots to win the Grand Slam title, and why wouldn’t they be? Vinci had lost in the first round of 23 of the 44 matches she’d played in the US Open before the 2015 tournament, and Pennetta had lost 48 times playing singles in the tournament prior to this year’s Open. They had been beaten a combined total of 92 times in their previous attempts, and neither had high hopes for stronger finishes this year.

Yet, they showed up. They brought their finesse games to the hard courts that in recent years have belonged to the big power hitters who dominated the US Open as well as the other Grand Slams in Melbourne, Paris and London. They showed up.

They came, they played, they conquered; and then they smiled with real joy in their moment of triumph.

The two thirty-three-year-old women who played against each other in this final have known each other since they were nine years old. They started playing tennis together as children and later shared a home for four years when they began playing on the professional tour. They successfully played doubles together and with other partners for more than fifteen years, but neither was a singles star…until the 2015 US Open when Vinci defeated the number one American singles player Serena Williams and Pennetta dismissed the number two seed Simona Halep.

Miraculously, they stood together with their trophies at the awards presentation ceremony following the championship match.

The ecstasy of victory

In her trophy acceptance speech, Flavia Pennetta stunned the tennis world by announcing her retirement at the end of this year. She said she made the decision a month before the US Open and that she never dreamed she would win the tournament but was thrilled to be able to leave the professional arena with a Grand Slam title. A Cinderella ending to years of hard work and determination.

When someone from the press asked her afterwards about why she was leaving, she replied, “The moon is going up and down, no?” It is, indeed, and Flavia will now have a view of it from somewhere other than a tennis court. We wish her well. 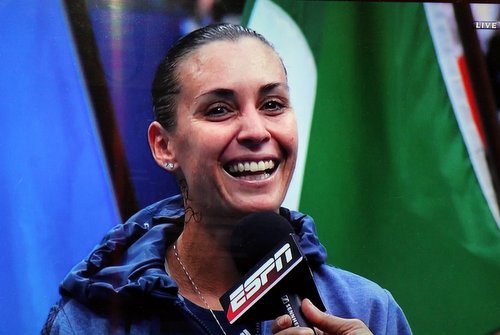 In the past fifteen years, many of the tennis champions have won more than one major title – Serena has twenty-one, Roger Federer has seventeen, for example – and while their happiness is apparent in every victory, there is something magical about a ceremony with a first-time champion who has loved the sport and persevered in following her dream all over the world from Italy to New York City and will go home carrying a Grand Slam trophy.

Wrap this one up for the history books. It’s a memory-maker. Do you remember when…at the 2015 US Open…those Italians…

Sheila Morris is a personal historian, essayist with humorist tendencies, lesbian activist, truth seeker and speaker in the tradition of other female Texas storytellers including her paternal grandmother. In December, 2017, the University of South Carolina Press published her collection of first-person accounts of a few of the people primarily responsible for the development of LGBTQ organizations in South Carolina. Southern Perspectives on the Queer Movement: Committed to Home will resonate with everyone interested in LGBTQ history in the South during the tumultuous times from the AIDS pandemic to marriage equality. She has published five nonfiction books including two memoirs, an essay compilation and two collections of her favorite blogs from I'll Call It Like I See It. Her first book, Deep in the Heart: A Memoir of Love and Longing received a Golden Crown Literary Society Award in 2008. Her writings have been included in various anthologies - most recently the 2017 Saints and Sinners Literary Magazine. Her latest book, Four Ticket Ride, was released in January, 2019. She is a displaced Texan living in South Carolina with her wife Teresa Williams and their dogs Spike, Charly and Carl. She is also Nana to her granddaughter Ella James born 10-01-2019. Born in rural Grimes County, Texas in 1946 her Texas roots still run wide and deep.
View all posts by Sheila Morris →
This entry was posted in Reflections, sports and tagged flavia pennetta, roberta vinci, US Open women's final. Bookmark the permalink.

5 Responses to The Smiles Have It!