Not All Pioneers Rode in Covered Wagons

One of my favorite shows on television when I was young was Wagon Train starring Ward Bond as the wagon train master and Robert Horton as the scout.  I was eleven years old when the show started and used to watch it on a TV set that was in a short wooden cabinet  which held a tiny screen the size of an iPad.  Black and white shows on a very small TV.  Wagons Ho.

Each week the episode typically involved an obstacle to smooth passage on the seventeen hundred mile trek from St. Joseph, Missouri to Sacramento, California. Someone was ill or one of the wagons lost a wheel and ran amok hurtling down a steep hill or there was the constant threat of unfriendly Native Americans who for some reason didn’t like the idea of strangers taking over their homelands or constant bickering between the wagon master and his support staff about which way was the safest route for the next day’s journey.  Always something, as Roseanne Roseannadanna would say.

Yet, in spite of a multitude of difficulties, the wagon train kept going and I kept going with them for eight seasons. The cast changed through the years, but the people continued to persevere in their westward adventures.  Today when I think of the term pioneers,  I have a mental image of the seemingly endless stream of men, women and children riding in covered wagons to become the first settlers in new territories west of the Mississippi River.  Webster’s dictionary definition of pioneers confirms that image partially as it calls pioneers  the”first to settle in a new territory.”

But that’s not the only dictionary definition of the word pioneer. Webster also says that pioneers are “a person or group that originates or helps open up a new line of thought or activity…”.  Not all pioneers rode in covered wagons and not all new territories are limited to land.  For some, the goals of a journey involve the search for new lines of thought like equal treatment and fairness regardless of differences, and  the distances traveled in personal lives to defend diversity often seem as far as the miles between St. Joseph, Missouri and Sacramento, California.

Carole Stoneking was a woman who fits that description of a pioneer. She was born in 1937, a time when the trains and automobiles made covered wagons obsolete. Her birthplace was the motor city: Detroit, Michigan.  She loved art and wanted to be a fine artist but was told at a very young age that was an impossible dream – no woman could really be a successful professional artist.  She loved women, too, in a time when homosexuality was considered to be a religious abomination as well as a mental illness – not to mention a criminal activity for which she could be thrown in jail.

In spite of the dangers involved, Carole announced she was a lesbian in 1956 and began a long-term relationship with another woman in Detroit.  She was nineteen years old. (This was thirteen years before the Stonewall Riots which some historians consider to be the birth of the LGBT civil rights movement.) Her family contacted the police to try to have her arrested and removed from her girlfriend’s apartment, but the police advised them that wasn’t possible because she wasn’t being held against her will. The obstacles and adversaries Carole continued to face in her real life as a lesbian for the next sixty years were as difficult for her to overcome  as the ones faced by the Wagon Train pioneers, and yet, like them, she persevered.

Her lifetime of advocacy for women’s rights and equal rights for the LGBT community began when she came out in 1956 and ended today with her death  in Lexington, South Carolina.  Carole was proud of her fight for equality and fairness that spanned six decades of sweeping cultural changes, and she embraced the groups that were formed to show “new lines of thought” about homosexuality.  While she never rode in a covered wagon, she also never missed an opportunity to ride on a float in a Pride Parade in Columbia. 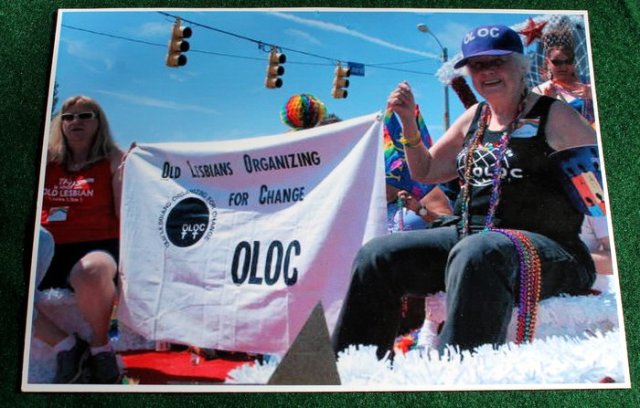 The final Webster definition of a pioneer is one who “opens or prepares for others to follow.”  Every time Carole spoke up for equal treatment, every letter she wrote, every meeting she attended, every march she supported with her presence, every hour she spent recording her history – she was preparing for others to follow…and we have…and we will.

When I think of a pioneer today, I will remember a fellow traveler who struggled with the imperfections we all have on a journey we all make – and of a woman who helped to open up new ways of thinking not just for herself but for those who will come after her.

Sheila Morris is an essayist with humorist tendencies who periodically indulges her desires to write outside her genre by trying to write fiction and poetry. In December, 2017, the University of South Carolina Press published her collection of first-person accounts of a few of the people primarily responsible for the development of LGBTQ organizations in South Carolina. Southern Perspectives on the Queer Movement: Committed to Home will resonate with everyone interested in LGBTQ history in the South during the tumultuous times from the AIDS pandemic to marriage equality. She has published five nonfiction books including two memoirs, an essay compilation and two collections of her favorite blogs from I'll Call It Like I See It. Her first book, Deep in the Heart: A Memoir of Love and Longing received a Golden Crown Literary Society Award in 2008. Her writings have been included in various anthologies - most recently the 2017 Saints and Sinners Literary Magazine. Her latest book, Four Ticket Ride, was released in January, 2019. She is a displaced Texan living in South Carolina with her wife Teresa Williams and their dogs Spike and Charly. Her Texas roots are never far from her thoughts.
View all posts by Sheila Morris →
This entry was posted in Personal, Reflections and tagged carole stoneking, LGBT community, pioneer, wagon train. Bookmark the permalink.

8 Responses to In Memoriam: Carole Stoneking