In 1819 a twenty-year-old man from New Hampshire finished a four-year apprenticeship in architecture and heeded the words of Horace Greeley to leave his New England home and go west, young man, go west.  He ended up in Savannah, Georgia.

Twenty years later this same man would leave his Georgia home with a wife, two slaves, enough materials to build 50 cotton gins and the knowledge necessary to run a plant that manufactured them. His name was Daniel Pratt.

We stayed last night in the town Daniel created for the workers in his cotton gin plant: Prattville, Alabama. Pretty took us on a tour of the historic downtown area this morning. We love an historic downtown area – particularly one as beautiful as this one. Imagine what this looked like in 1839 – before the Civil War – one man’s dream.

Daniel Pratt was one of Alabama’s first industrialists

Daniel has his own personal historic district now 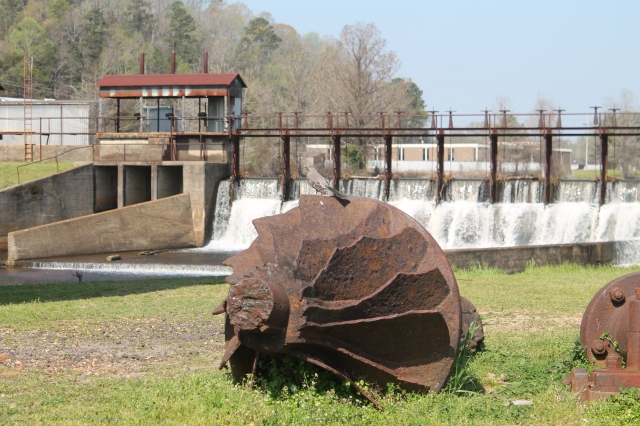 My friend had a bird’s eye view of the falls

…and sat on the remnants of history 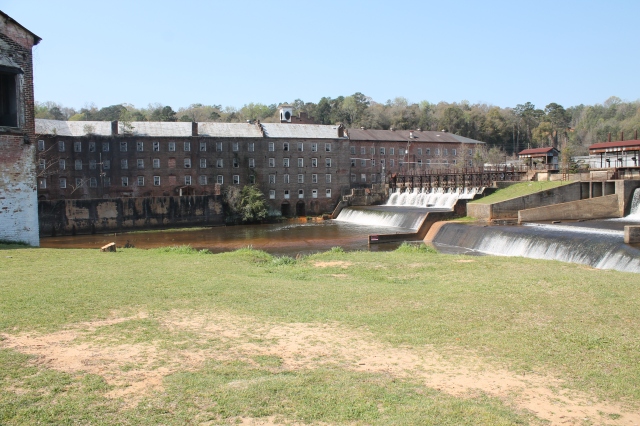 Guess who else was from Prattville besides Daniel Pratt?

Had to say goodbye to the wisteria and Prattville

On the road again – Charly perches atop Yeti cooler

I am so tired. Please, God, get me out of this vehicle.

Spike’s prayers were answered…we have stopped for the night in Slidell, Louisiana, which is 30 miles from New Orleans.

We are sneaking up on it.

Sheila Morris is an essayist with humorist tendencies who periodically indulges her desires to write outside her genre by trying to write fiction and poetry. In December, 2017, the University of South Carolina Press published her collection of first-person accounts of a few of the people primarily responsible for the development of LGBTQ organizations in South Carolina. Southern Perspectives on the Queer Movement: Committed to Home will resonate with everyone interested in LGBTQ history in the South during the tumultuous times from the AIDS pandemic to marriage equality. She has published five nonfiction books including two memoirs, an essay compilation and two collections of her favorite blogs from I'll Call It Like I See It. Her first book, Deep in the Heart: A Memoir of Love and Longing received a Golden Crown Literary Society Award in 2008. Her writings have been included in various anthologies - most recently the 2017 Saints and Sinners Literary Magazine. Her latest book, Four Ticket Ride, was released in January, 2019. She is a displaced Texan living in South Carolina with her wife Teresa Williams and their dogs Spike and Charly. Her Texas roots are never far from her thoughts.
View all posts by Sheila Morris →
This entry was posted in Humor, Life, photography, Slice of Life, The Way Life Is and tagged cotton gins, daniel pratt, jr, mississippi welcome center, prattville, wilson pickett. Bookmark the permalink.