Dear Husband, I certainly expected a letter this a.m.  I went to the office and returned disappointed.  They are not going to have the supper Sat night, will have a play at the Hall for benefit of Albertville sufferers.  We may go if it is not too cold.  I tell you today is terrible.  Must have been a hail storm up above us.  Write me soon.  I am ever your wife,  Bessie 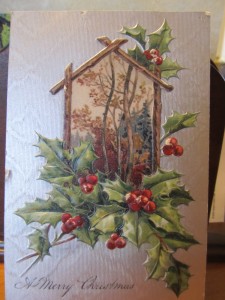 Dear Husband, Letter rec’d and contents noted.  But Sweetheart, I’ll be there Sat sure rain or shine or sick or well.  Mr. Moore {Luke’s father} told me not to go Friday but I had decided to go Sat anyway.  Wish you were here for the Xmas tree tomorrow night.  I’ll close for this time.  Love to all.  I am as ever your wife, Bessie

The year is 1908, and it is a time before iPhones, iPads, 4G, 3G or any G…a time before AT&T and Verizon and Sprint cellular phones…actually, it is a time before phones.  Period.   Imagine if you will the days before communication was instant.  No email.   No Facebook.  No computers.  Not a Tweet to be had from a Twitter account.  No television with a weather channel and a forecast for the next seven days.  No fax machines.  The 20th century will see the beginnings and mindboggling development of a tremendous technological revolution, but it wasn’t happening in 1908.

As the century began, it was all about post cards and letter writing.  Bessie Moore and her daughter Lucia were separated from husband and father Luke Moore.   Bessie and Lucia lived in Alabama City, Alabama and Luke lived and worked in Atlanta, Georgia.  He worked for the Atlanta Steel Co.   Bessie kept a journal of her life through the post cards she carefully preserved in an album which was sold this weekend in March, 2012 at a yard sale.   Think of it.  More than a hundred years later this collection of a woman’s lifetime is unwanted by her descendants or friends.  Ancestry.com would be appalled.  Luckily for me, my partner Teresa spotted it and brought it to our home.   I have fallen in love with this family and feel like an intruder when I read their notes to each other, but somehow I don’t think they mind.

Dear Husband, Letter recd this am.  I had just returned from meeting {sister} Hattie.  She looks so much better than she did Xmas.  Today is such a lovely day, sorry you are lonesome.  Will try and hurry up and get back as soon as possible.  I may go to Huntsville next week, do not know for sure.  I hope you have a nice time tomorrow.  I thought you would stay at Mrs. Smith’s perhaps this week anyway.  Had a little rain & wind storm here yesterday.  A cyclone at Albertsville. Killed (8) eight and some 40 injured.  Just awful.  Sent relief trains and physicians.  I forgot to tell you the atcil (sp?) plant has never run and liable never to from what I can hear.  With love I’ll close for this time. Will write tomorrow of course.  your wife, Bessie

And so I leave the Moore family this evening with you. Alabama is trying to recover in 1908 from a cyclone reminiscent of the tornadoes we’ve experienced in the south this week while  Bessie and Luke struggle with the loneliness of being apart much like the feelings Teresa and I have had during the past year we’ve lived in different places and spaces.

Luke sends these Easter Greetings to Bessie at an unknown date with only the handwritten words shown below. 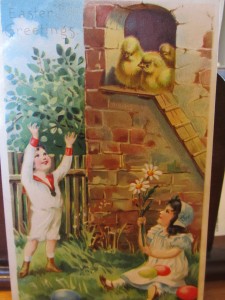 Sheila Morris is a personal historian, essayist with humorist tendencies, lesbian activist, truth seeker and speaker in the tradition of other female Texas storytellers including her paternal grandmother. In December, 2017, the University of South Carolina Press published her collection of first-person accounts of a few of the people primarily responsible for the development of LGBTQ organizations in South Carolina. Southern Perspectives on the Queer Movement: Committed to Home will resonate with everyone interested in LGBTQ history in the South during the tumultuous times from the AIDS pandemic to marriage equality. She has published five nonfiction books including two memoirs, an essay compilation and two collections of her favorite blogs from I'll Call It Like I See It. Her first book, Deep in the Heart: A Memoir of Love and Longing received a Golden Crown Literary Society Award in 2008. Her writings have been included in various anthologies - most recently the 2017 Saints and Sinners Literary Magazine. Her latest book, Four Ticket Ride, was released in January, 2019. She is a displaced Texan living in South Carolina with her wife Teresa Williams and their dogs Spike, Charly and Carl. She is also Naynay to her two granddaughters Ella and Molly James who light up her life for real. Born in rural Grimes County, Texas in 1946 her Texas roots still run wide and deep.
View all posts by Sheila Morris →
This entry was posted in Life, Random, Reflections, Slice of Life, The Way Life Is and tagged 1908 cyclone in Alabama, atlanta steel company, letter writing, pictures on post cards, post cards. Bookmark the permalink.