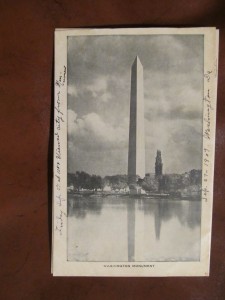 Bessie and Luke left the Jamestown Exposition and continued their honeymoon with a visit to Washinton, D.C.   The Washington Monument was a must stop for them as they got their bearings inside the city and planned their stay.   Where to go first?   So much to see and do in the nation’s capitol and only three days for sightseeing!   The answer is the same as it is for many of us who travel to D.C. a century later, whether honeymooning or not.   The White House.   The iconic symbol of America’s pride in itself. 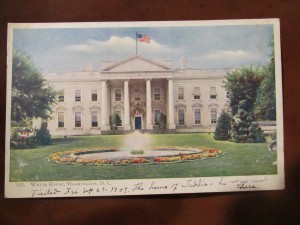 Theodore “Teddy” Roosevelt was the 26th President of the United States and held that office from 1901 – 1909.   He was famous for his Rough Riders in the Spanish American War of 1898 but in 1906 received the Nobel Peace Prize for helping to negotiaite the Russo-Japanese Treaty.   War and Peace.  Two of the thorniest obsessions of American Presidents, and Teddy Roosevelt was no exception.   So in 1907 when our friends Luke and Bessie came to call,  he would have been the inhabitant of The White House as they stood in line to get their tickets for a tour of his home.  Alas, as she wrote jokingly on her post card, Teddy was not there. Bessie was so excited to go through the historical residence she bought a post card for each change of rooms and wrote the time for every half hour of the tour. 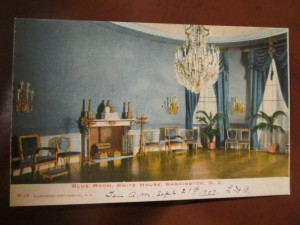 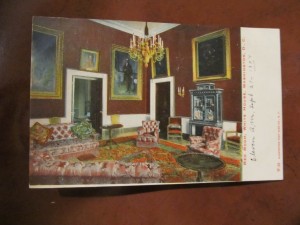 The tour lasted two hours and was unforgettable for the young couple who were completely taken in by the guide’s descriptions and stories that came with the house.   If these walls could talk.

The day was half over and Luke suggested they walk past a couple of other buildings he wanted to see on the way back to their hotel for a late lunch and afternoon delight.   It was a honeymoon, after all.

Naturally he wanted to see the military and agriculture  buildings on the very first day of their visit, and Bessie went along with him.  She purchased the post cards for their memory book which she faithfully kept as a reminder of each day’s adventures.   It was a world without digital cameras, a world without cameras unless you were a professional photographer, so the post cards were Bessie’s attempt to preserve their reminiscences.

Let’s leave our Alabama couple to themselves on this Friday night in the Big City and wish them well until we meet them in the morning.

Sheila Morris is a personal historian, essayist with humorist tendencies, lesbian activist, truth seeker and speaker in the tradition of other female Texas storytellers including her paternal grandmother. In December, 2017, the University of South Carolina Press published her collection of first-person accounts of a few of the people primarily responsible for the development of LGBTQ organizations in South Carolina. Southern Perspectives on the Queer Movement: Committed to Home will resonate with everyone interested in LGBTQ history in the South during the tumultuous times from the AIDS pandemic to marriage equality. She has published five nonfiction books including two memoirs, an essay compilation and two collections of her favorite blogs from I'll Call It Like I See It. Her first book, Deep in the Heart: A Memoir of Love and Longing received a Golden Crown Literary Society Award in 2008. Her writings have been included in various anthologies - most recently the 2017 Saints and Sinners Literary Magazine. Her latest book, Four Ticket Ride, was released in January, 2019. She is a displaced Texan living in South Carolina with her wife Teresa Williams and their dogs Spike, Charly and Carl. She is also Nana to her granddaughter Ella James born 10-01-2019. Born in rural Grimes County, Texas in 1946 her Texas roots still run wide and deep.
View all posts by Sheila Morris →
This entry was posted in Life, Personal, Random, Reflections, Slice of Life, The Way Life Is and tagged d.c. in 1907, honeymoon in 1907, life in the early 1900s, picture post cards from the early 1900s, Teddy Roosevelt, the white house tours, washington, washington monument. Bookmark the permalink.