The Lady Gamecocks rolled into Auburn, Alabama with their game faces on and had an amazing first quarter that led to their victory in a gorgeous Auburn Arena which held two bus loads of loyal Gamecock fans and a few of us who made the trip on our own.

Next one to miss a free throw…

Lord, I can’t watch – makes me too nervous

Davis in deep, deep concentration before the game –

(she scored a USC record 19 points in first quarter) 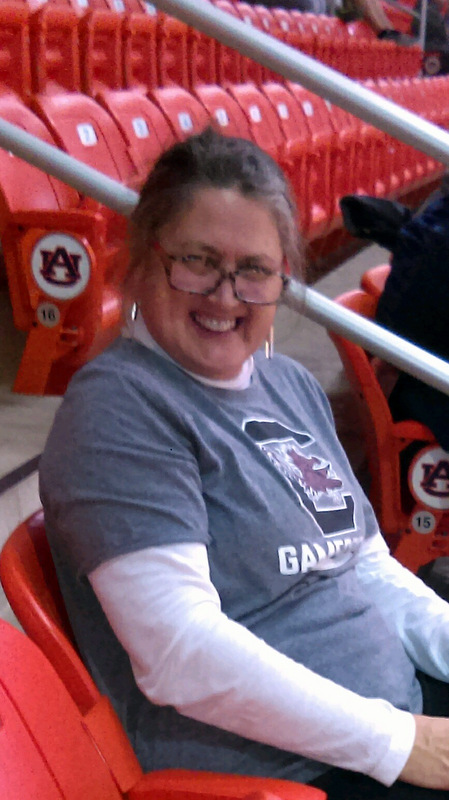 Pretty before the game – feeling optimistic 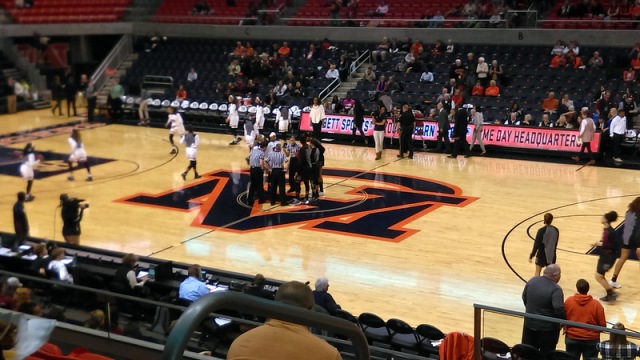 Captains Confab with refs before game

Gamecocks didn’t quite maintain the first quarter intensity and points but played well and managed to score 73 points before all was said and done. Auburn struggled in the first quarter but came back to score 47 points as their defense held our Bigs to the fewest points they’ve had this year so very good effort from the Tigers. Unfortunately, our guards were On Fire and hit 14 of 28 from the three-point line which was another record night.

Everybody happy as they left the battlefield 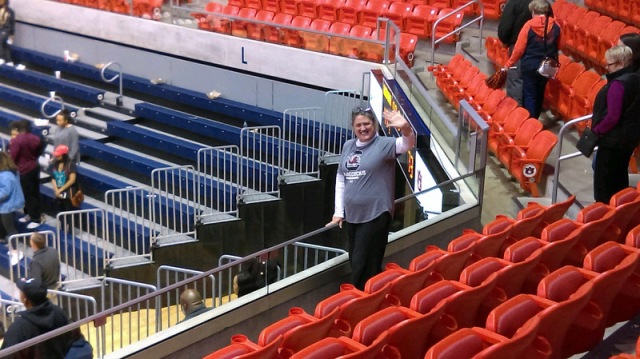 Pretty and I discovered why War Eagle Nan loves her Auburn University – it’s a special place. We even got to see the War Eagles themselves when they posed for celebrity photos prior to the game behind our seats. They look ferocious but were tolerant of the paparazzi.

All in all, the Auburn experience was a Memory Maker, as Granny Selma used to say when she was in her right mind.

But…we were all dragging by the time we got back to the motel…Spike and Charly stayed in the car while we went to the game, and Charly destroyed her leash to punish us. Oh, well.

Road Trip continues as we make our way to Gainesville for the Florida game Sunday afternoon.

Sheila Morris is a personal historian, essayist with humorist tendencies, lesbian activist, truth seeker and speaker in the tradition of other female Texas storytellers including her paternal grandmother. In December, 2017, the University of South Carolina Press published her collection of first-person accounts of a few of the people primarily responsible for the development of LGBTQ organizations in South Carolina. Southern Perspectives on the Queer Movement: Committed to Home will resonate with everyone interested in LGBTQ history in the South during the tumultuous times from the AIDS pandemic to marriage equality. She has published five nonfiction books including two memoirs, an essay compilation and two collections of her favorite blogs from I'll Call It Like I See It. Her first book, Deep in the Heart: A Memoir of Love and Longing received a Golden Crown Literary Society Award in 2008. Her writings have been included in various anthologies - most recently the 2017 Saints and Sinners Literary Magazine. Her latest book, Four Ticket Ride, was released in January, 2019. She is a displaced Texan living in South Carolina with her wife Teresa Williams and their dogs Spike, Charly and Carl. She is also Naynay to her two granddaughters Ella and Molly James who light up her life for real. Born in rural Grimes County, Texas in 1946 her Texas roots still run wide and deep.
View all posts by Sheila Morris →
This entry was posted in Personal, Slice of Life, sports and tagged a'ja wilson, allisha gray, auburn university, bianca cuevas, elaina coates, kaela davis, lady gamecocks basketball team, ty harris. Bookmark the permalink.