pledging allegiance – then and now

I pledge allegiance to the flag of the United States of America and to the Republic for which it stands, one nation under God, indivisible, with liberty and justice for all.

I was six years old standing beside my worn wooden school desk with my hand over my heart, my eyes directed to the American flag at the front of the room next to the blackboard when my teacher, Mrs. Lucille Lee, taught me and the other 18 children in the first and second grade classes who shared a very small classroom in the red brick building that housed the Richards Public School –  taught us the pledge of allegiance.

I’m sure I had little understanding of the meaning of those words in 1954 but I was very proud that I had memorized and could recite them for my parents and grandparents who were equally pleased for me to know all the words that reassured their heightened post World War II patriotism. My father and three uncles had all returned home safely from that war, and my family echoed the allegiance the pledge affirmed.

The Pledge of Allegiance had been officially adopted in 1945 at the end of WWII but changed slightly in 1954 with the addition of the words “under God” so that was the only version I ever knew. I repeated those words at the beginning of school every day for the first eight years of my public school life. The older I became, the more I began to understand the significance of the words “allegiance…indivisible…with liberty and justice for all.” I just loved the liberty and justice for all part.

Each night during those early years of my life in the 1950s the three television channels played the Star Spangled Banner to signify the end of their day’s programming. If I were lucky enough to be allowed to stay up and watch The Late Show, I could listen to the music while the only image on the screen was the American flag. No words, no singing – just the American flag and the band music.

The child sitting in the dark in the living room in the front of the tv by herself couldn’t have realized – had no way of knowing then – that the symbols she internalized had a rich history. The American flag had been adopted by the Second Continental Congress in 1777, modified 26 times since then until President William Howard Taft finally signed an executive order with instructions for what the flag should look like in 1912.

The flag was to have seven red stripes, six white stripes to represent the original thirteen colonies who fought for their freedom from Britain. White stars on a blue field stood for each state that was a part of the indivisible Republic. Nicknames for the flag included Old Glory, Star Spangled Banner, the Stars and Stripes (not to be confused with the American military newspaper of the same name).

The American flag speaks good will to me. Whenever I’ve seen the flag raised at football games, basketball games, the Olympics, whenever I return home from traveling outside the United States, whenever I’ve seen the flag flying at half-staff to honor fallen heroes – I have felt a sense of pride in what I believe my country stands for. Although no one asks me to recite the Pledge of Allegiance any longer, the sight of the flag, the sound of our national anthem performed by someone who sings off-key or on, or a band playing it or a choir singing it continues to give me goose bumps as I stand quietly or sometimes sing along.

Imperfect, yes – justice and equality haven’t been wrapped neatly in a one-size-fits-all package for me. My adult years brought a higher level of consciousness of these inequalities in my country and along with the consciousness came a lifetime of fighting for social justice issues; but somehow, through it all, the flag seemed to symbolize the potential for hope and possibilities for fulfillment of the promises made in the Constitution and Bill of Rights.

Today my consciousness has again been raised to understand that not everyone shares my feelings about the American flag and our national anthem because they have had different life experiences. Colin Kaepernick, the San Francisco 49ers quarterback who was disturbed by the inhumane treatment of blacks and other people of color in America, chose to kneel rather than stand for the national anthem before a preseason football game in 2016 and had this to say initially as an explanation for the act that has since ignited a national firestorm of bitterness and divisiveness.

“I am not going to stand up to show pride in a flag for a country that oppresses black people and people of color. To me, this is bigger than football and it would be selfish on my part to look the other way. There are bodies in the street and people getting paid leave and getting away with murder.”

The great 19th. century African-American orator Frederick Douglass once said “Those who profess to favor freedom, and yet deprecate agitation, are men who want crops without plowing up the ground.”

The agitation begun by a single NFL quarterback who dared to kneel for what he believed has now become a national debate that divides  football players, political parties, television commentators, families and friends – particularly the anonymous voices on social media. Somehow, the support of a man to freely express his frustration over unfair conditions in our country is seen as unpatriotic by a large group of citizens including the President of the United States who makes inflammatory remarks that stoke fires of hatred if given the slightest chance to speak or tweet.

The political has become personal for the little girl who grew up loving the American flag and the Star Spangled Banner, the little girl who lived long enough to see those symbols through the eyes of another beholder…someone who loves his country and respects those who have served it but who also believes the flag no longer represents what our nation has become.

The constant barrage of arguments and disrespectful discourse has forced me to look at the flag I see every day in my own office in a different manner. My eyes now see Mrs. Lee’s classroom which had only white students and that the underlying racism of segregation meant black students in Richards, Texas who were my age attended a separate public school that probably wasn’t equal. I wonder if those students had a teacher who taught them the Pledge of Allegiance. I’ll never know what they experienced at the “colored school.”

What I do know in my heart is my father who served his country in WWII and whose flag was given to my mother as a symbol of a nation’s appreciation for his service believed he volunteered to make sure the world would be a better place – that our democracy would serve as an example of standing for those who might one day want to kneel. 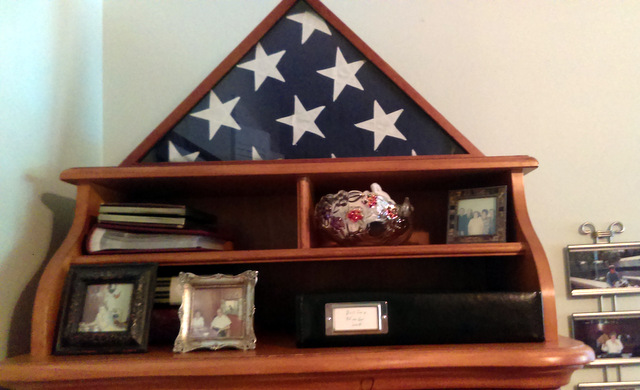 Sheila Morris is a personal historian, essayist with humorist tendencies, lesbian activist, truth seeker and speaker in the tradition of other female Texas storytellers including her paternal grandmother. In December, 2017, the University of South Carolina Press published her collection of first-person accounts of a few of the people primarily responsible for the development of LGBTQ organizations in South Carolina. Southern Perspectives on the Queer Movement: Committed to Home will resonate with everyone interested in LGBTQ history in the South during the tumultuous times from the AIDS pandemic to marriage equality. She has published five nonfiction books including two memoirs, an essay compilation and two collections of her favorite blogs from I'll Call It Like I See It. Her first book, Deep in the Heart: A Memoir of Love and Longing received a Golden Crown Literary Society Award in 2008. Her writings have been included in various anthologies - most recently the 2017 Saints and Sinners Literary Magazine. Her latest book, Four Ticket Ride, was released in January, 2019. She is a displaced Texan living in South Carolina with her wife Teresa Williams and their dogs Spike, Charly and Carl. She is also Nana to her granddaughter Ella James born 10-01-2019. Born in rural Grimes County, Texas in 1946 her Texas roots still run wide and deep.
View all posts by Sheila Morris →
This entry was posted in Lesbian Literary, Life, Personal, politics, Reflections, Slice of Life, The Way Life Is and tagged american flag, colin kaepernick, liberty and justice for all, old glory, patriotism, pledge of allegiance, the star spangled banner. Bookmark the permalink.

3 Responses to pledging allegiance – then and now