the young woman at the rock 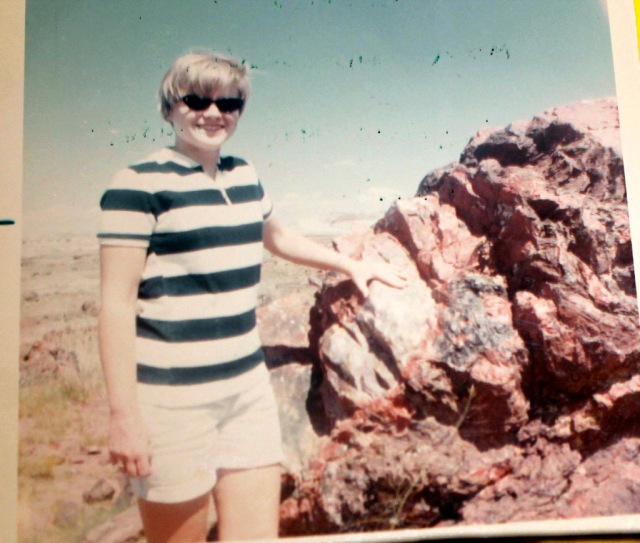 I was 22 years old, leaving home – really leaving home on a 3,000 mile trip from Houston, Texas to Seattle, Washington with a friend from college who was as eager for adventure and a change of scenery as I was. The year was 1968, and my brand new  two-door blue Buick Skylark with the white coupe top had never been farther west than Austin. Time to break that baby in.

My friend and I had picked Seattle on a map sitting in a bar in Houston – we were looking for the farthest distance in the continental USA from where we sat. Bangor, Maine lost out to the Pacific Northwest. For me, it was the right choice and changed my life forever.

I keep this picture in a little box on my desk and take it out occasionally to remind me of that trip and the young woman smiling with such assurance as she stood near a rock in Arizona. She makes me smile when I see her.

Sheila Morris is a personal historian, essayist with humorist tendencies, lesbian activist, truth seeker and speaker in the tradition of other female Texas storytellers including her paternal grandmother. In December, 2017, the University of South Carolina Press published her collection of first-person accounts of a few of the people primarily responsible for the development of LGBTQ organizations in South Carolina. Southern Perspectives on the Queer Movement: Committed to Home will resonate with everyone interested in LGBTQ history in the South during the tumultuous times from the AIDS pandemic to marriage equality. She has published five nonfiction books including two memoirs, an essay compilation and two collections of her favorite blogs from I'll Call It Like I See It. Her first book, Deep in the Heart: A Memoir of Love and Longing received a Golden Crown Literary Society Award in 2008. Her writings have been included in various anthologies - most recently the 2017 Saints and Sinners Literary Magazine. Her latest book, Four Ticket Ride, was released in January, 2019. She is a displaced Texan living in South Carolina with her wife Teresa Williams and their dogs Spike, Charly and Carl. She is also Nana to her granddaughter Ella James born 10-01-2019. Born in rural Grimes County, Texas in 1946 her Texas roots still run wide and deep.
View all posts by Sheila Morris →
This entry was posted in Humor, Lesbian Literary, Life, Personal, photography, Reflections, Slice of Life, The Way Life Is and tagged arizona desert, bangor maine, seattle washington, the year 1968. Bookmark the permalink.

6 Responses to the young woman at the rock