the battle my grandmother lost 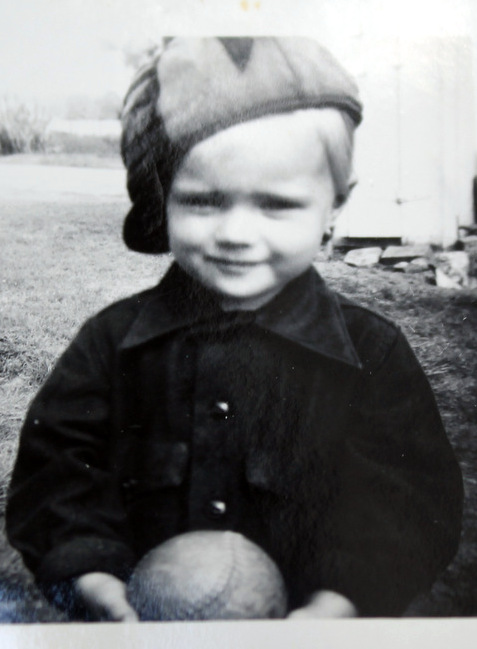 my early years in my hometown of rural Richards, Texas

my dad and me at a family picnic in matching shirts 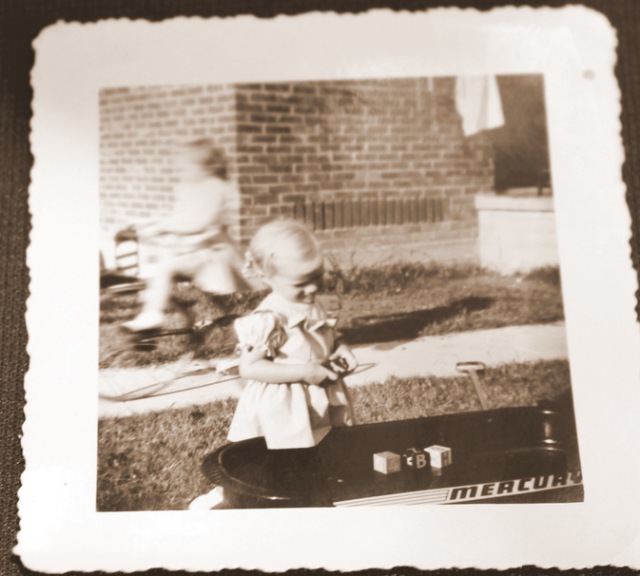 a birthday party dress made by my grandmother (circa 1951)

my grandmother made this dress and a  picture postcard of me

for her family Easter card in 1949

Bless her heart. My grandmother tried and tried to reshape my fashions which upon reflection she probably hoped would reshape my life. One of the most dreaded phrases my mother ever spoke to me – the one that made me cringe-was “Your grandmother is making you a new dress and needs you to walk down to her house to try it on. No arguments, no whining, just go.”

I absolutely hated to stand on her little stool while she endlessly pinned away to make sure  the pattern she bought from a grand clothing store in much bigger town Navasota  fit perfectly on my small body. She pulled, tugged here and there, made me turn around as she measured whatever cloth she had purchased when she bought the pattern. I prayed silently that the aroma I smelled was her pineapple fried pies…the only possible redemption from the hell of being poked and prodded for a new dress I didn’t want to wear.

My grandmother Betha Day Robinson Morris and I lived within shouting distance of each other in the tiny town (pop. about 500) of Richards until my dad found a new job that took us out of the place I called home when I was 13 years old. Our new home in Brazoria was less than two hours from Richards so we came back every other week for most of my teenage years. Distance did not deter my grandmother from her sewing, however.

She usually managed to have something for me to try on whenever we visited. I finally surrendered to her passion for sewing because as I grew older I came to understand sewing was an important part of her life, but to this day I dread hearing Pretty say she brought something home for me to try on. 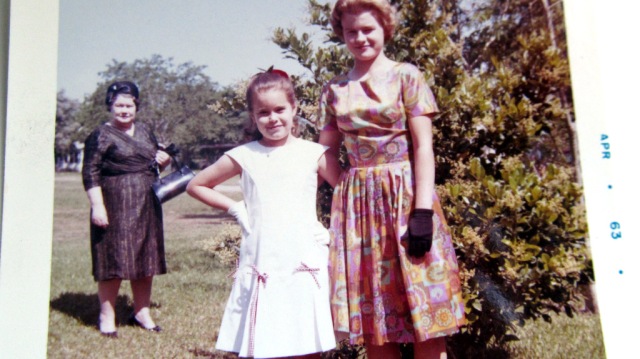 my grandmother surveys her granddaughters

before Easter Sunday church services in 1963

while my younger cousin Melissa modeled her store-bought outfit

My grandmother continued to sew for me until I was in my twenties. Every Christmas she wrapped a large box in her best wrapping paper and favorite bow saved from the previous Christmas to give to me. I always opened with feigned surprise at the dress she made for me to wear to church and praised her for being able to still find the perfect pattern and material for me even when I wasn’t there to try it on.

I’ll never forget the last time I opened a gift of clothing she made for me. She had made a pants suit – unbelievable. I could see she was pleased with herself for breaking from the dress tradition she wanted me to wear to making the pants she now understood would forever be my choice of clothes. The year was 1968 – I was 22 years old – my grandmother would have been 55. The pants suit represented a rite of passage for both of us.

Unfortunately, I never could bring myself to wear the pants suit which was made with a hideous polyester fabric and a horrible bright green and white large zig zag pattern. I couldn’t bring myself to wear it, but I carried it with me around the country wherever I moved for the next 30 years. I would carefully hang it in my closet as a daily reminder of  the love my grandmother gave me for as long as she lived.

My grandmother Betha was a flawed individual but what I wouldn’t give today to hear my mother say “Sheila Rae, your grandmother is making you a new dress and wants you to try it on. No arguments, no whining, just go.”

(A special shout out to my blogging friend Luanne at http://writersite.org for inspiring me to write about clothes.)

Sheila Morris is a personal historian, essayist with humorist tendencies, lesbian activist, truth seeker and speaker in the tradition of other female Texas storytellers including her paternal grandmother. In December, 2017, the University of South Carolina Press published her collection of first-person accounts of a few of the people primarily responsible for the development of LGBTQ organizations in South Carolina. Southern Perspectives on the Queer Movement: Committed to Home will resonate with everyone interested in LGBTQ history in the South during the tumultuous times from the AIDS pandemic to marriage equality. She has published five nonfiction books including two memoirs, an essay compilation and two collections of her favorite blogs from I'll Call It Like I See It. Her first book, Deep in the Heart: A Memoir of Love and Longing received a Golden Crown Literary Society Award in 2008. Her writings have been included in various anthologies - most recently the 2017 Saints and Sinners Literary Magazine. Her latest book, Four Ticket Ride, was released in January, 2019. She is a displaced Texan living in South Carolina with her wife Teresa Williams and their dogs Spike, Charly and Carl. She is also Naynay to her two granddaughters Ella and Molly James who light up her life for real. Born in rural Grimes County, Texas in 1946 her Texas roots still run wide and deep.
View all posts by Sheila Morris →
This entry was posted in Humor, Lesbian Literary, Life, Personal, photography, Reflections, Slice of Life, The Way Life Is and tagged rural life in texas in the 1950s, sewing. Bookmark the permalink.

20 Responses to the battle my grandmother lost