GIRL POWER: UNSCRIPTED AND UNSTOPPABLE -AND SOMETIMES NEEDING A BATH

Tomorrow is the International Day of the Girl Child with its 2019 theme Girl Power: Unscripted and Unstoppable.

The UN Secretary-General Antonio Guterres says “We need to uphold the equal rights, voices, and influence of girls in our families, communities, and nations. Girls can be powerful agents of change, and nothing should keep them from participating fully in all areas of life.” Amen, brother.

Given the current state of political affairs in our nation with families divided, swept up into detention centers at our southern borders – living in horrendous conditions under a regime of daily terror – while across the big waters our nation abandons the friends who have been our major supporters in the war against ISIS, an abandonment that allows vicious attacks on these friends with a presumptive goal of ethnic cleansing…I say the openly corrupt men involved in these atrocities  need to go. Our country needs new leadership and directions, and I believe it’s time for girl power.

Luckily for Pretty and me, we have a granddaughter who gives us hope for the future. And thankfully, we see women and men today who are working tirelessly to make sure our granddaughter’s voice will be heard as they engage in speaking truth to power. 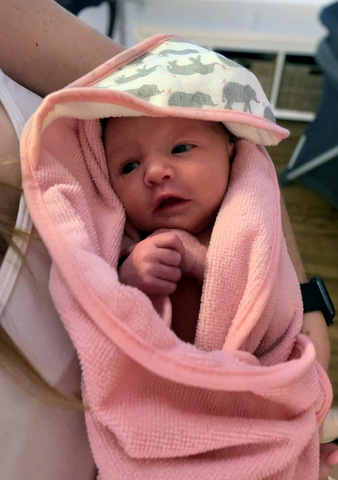 Ella in her elephant hoodie 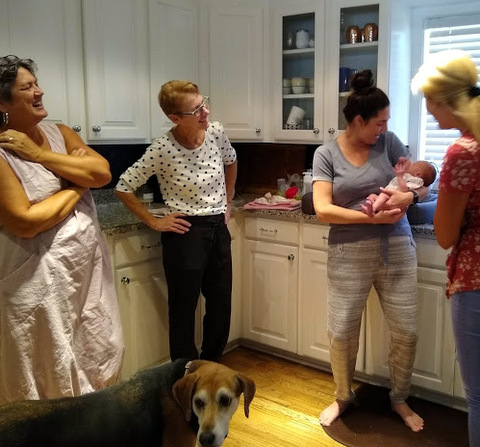 All baby girls have to start somewhere. Today Ella had a bath given to her by a group of four women who once were girls: two grandmothers, her mother, one of her cousins – and a female hound who wanted to get in the fun.

Happiness is having her hair combed by her mother after the bad old bath!

Tomorrow make time to celebrate the girls and women who have the potential to be powerful agents of change. To quote Speaker of the House Nancy Pelosi, the times have come to us.

Sheila Morris is a personal historian, essayist with humorist tendencies, lesbian activist, truth seeker and speaker in the tradition of other female Texas storytellers including her paternal grandmother. In December, 2017, the University of South Carolina Press published her collection of first-person accounts of a few of the people primarily responsible for the development of LGBTQ organizations in South Carolina. Southern Perspectives on the Queer Movement: Committed to Home will resonate with everyone interested in LGBTQ history in the South during the tumultuous times from the AIDS pandemic to marriage equality. She has published five nonfiction books including two memoirs, an essay compilation and two collections of her favorite blogs from I'll Call It Like I See It. Her first book, Deep in the Heart: A Memoir of Love and Longing received a Golden Crown Literary Society Award in 2008. Her writings have been included in various anthologies - most recently the 2017 Saints and Sinners Literary Magazine. Her latest book, Four Ticket Ride, was released in January, 2019. She is a displaced Texan living in South Carolina with her wife Teresa Williams and their dogs Spike, Charly and Carl. She is also Nana to her granddaughter Ella James born 10-01-2019. Born in rural Grimes County, Texas in 1946 her Texas roots still run wide and deep.
View all posts by Sheila Morris →
This entry was posted in Lesbian Literary, Life, Personal, photography, politics, racism, Reflections, Slice of Life, The Way Life Is and tagged baby baths, international day of the girl child, speaker of the house nancy pelosi, un sec gen antonio guterres. Bookmark the permalink.

8 Responses to GIRL POWER: UNSCRIPTED AND UNSTOPPABLE -AND SOMETIMES NEEDING A BATH