Horse-drawn carriages and trolley cars mingled with the newfangled motor cars that made Pennsylvania Avenue a noisy busy scene for our honeymooners Bessie and Luke as they toured Washington, D. C. over the weekend.  Bessie called the street Washington’s Favorite to indicate the importance she felt it had for the city in 1907 and, indeed, it remains the most famous avenue in the city a century later.

Saturday morning was cool and crisp as the couple continued their adventures with a visit to The Smithsonian Institute where they were immersed in the museum of American history and its most recent significant addition, the flag known as The Star-Spangled Banner.  The flag was loaned to the Smithsonian in 1907 by a Maryland family that had owned it since it flew proudly at the Baltimore garrison which successfully resisted the British naval bombardment in the War of 1812.  An American lawyer named Francis Scott Key had watched the cannons fire during the night from a boat a short distance away and when he saw the ragged American flag raised as the light of dawn bathed the scene,  he wrote the words to what would be recognized as our national anthem by President Herbert Hoover in 1931.  When Luke and Bessie saw it in the Institute almost a hundered after the War of 1812, they were moved by the careful preservation of the tattered faded stars and stripes.  What a country!

No time to linger here, though, as they needed to grab a quick lunch before the afternoon’s excitement of a  tour of The Capitol…food required for stamina. 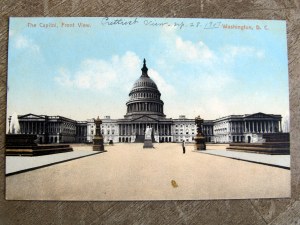 Although the tour of The Capitol ended at 4:30, Luke and Bessie decided to save the rest of their D. C. sightseeing for Sunday.  The Smithsonian and The Capitol in one day had been overwhelming – an overload of facts and hard on the feet in pre-tennis shoe days.  Luke’s leather boots and Bessie’s honeymoon heels weren’t designed for comfortable wear and their adrenalin sagged in the late afternoon.  Get to the hotel and lie down, they decided…have a late dinner and a little night music.

And that’s where we’ll leave them until tomorrow…

Sheila Morris is an essayist with humorist tendencies who periodically indulges her desires to write outside her genre by trying to write fiction and poetry. In December, 2017, the University of South Carolina Press published her collection of first-person accounts of a few of the people primarily responsible for the development of LGBTQ organizations in South Carolina. Southern Perspectives on the Queer Movement: Committed to Home will resonate with everyone interested in LGBTQ history in the South during the tumultuous times from the AIDS pandemic to marriage equality. She has published five nonfiction books including two memoirs, an essay compilation and two collections of her favorite blogs from I'll Call It Like I See It. Her first book, Deep in the Heart: A Memoir of Love and Longing received a Golden Crown Literary Society Award in 2008. Her writings have been included in various anthologies - most recently the 2017 Saints and Sinners Literary Magazine. Her latest book, Four Ticket Ride, was released in January, 2019. She is a displaced Texan living in South Carolina with her wife Teresa Williams and their dogs Spike and Charly. Her Texas roots are never far from her thoughts.
View all posts by Sheila Morris →
This entry was posted in Life, Personal, Random, Reflections, Slice of Life, The Way Life Is and tagged francis scott key, national anthem, penny post cards, picture post cards from the early 1900s, stars and stripes, the capitol building, the Smithsonian Institute, War of 1812, washington d.c.. Bookmark the permalink.