Songs Of The Show Boat – Oh My Darling Clementine

A radio favorite on the Maxwell House Show Boat in the 1930s, Oh My Darling Clementine is attributed to one Percy Montrose (1884) but this American western folk ballad had questionable origins and a variety of lyrics.  The Show Boat Four, a male quartet  plus piano, had a soloist sing each of the four verses they used in their arrangement with the quartet chiming in with harmony on the chorus.

The male quartet complete with appropriate Maxwell House coffee cups included from left to right Randolph (Tubby) Weyant, Harold R. “Scrappy” Lambert, Leonard Stokes and Bob Moody.  At the piano is Kenneth Christie who also handled arrangements for the four.  According to Songs of the Show Boat – A Collection of Favorite Songs That Never Grow Old, Tubby Weyant was first tenor and began his career as a soloist in a New York church.   Scrappy Lambert was second tenor and started his musical professional efforts by organizing his own jazz orchestra while he was attending Rutgers University.   Leonard Stokes was the baritone in the group and worked his way through the University of Missouri as a singing instructor.  The bass, Bob Moody, graduated from “Pathe ‘shorts’ to concert appearances.”   Ken Christie got started by playing tuba in a high school band.   Blow, baby, blow.   The most popular of the four, Scrappy Lambert,  was a backup singer for many orchestras of the 1920s and 30s and was one of the most prolific vocalists of that time according to radio historian David Lobosco.

In a cavern in a canyon, excavating for a mine, Dwelt a miner, forty-nin-er, and his daughter Clementine.

I definitely knew the chorus of My Darling Clementine and could sing it without skipping a word or note even though I missed the Show Boat quartet’s radio rendition.  On the other hand,  verse one I’d need a little help from my friends to be sure of the lyrics, but I would have recognized them without a doubt.   Frankly, the other three verses of Clementine floored me.

Light she was and like a fairy and her shoes were number nine,  herring boxes without topses, sandals were for Clementine.  (Verse 2)

Drove she ducklings to the water, ev’ry morning just at nine, hit her head a-gainst a splinter, fell into the foaming brine.  (Verse 3)

Ruby lips above the water. blowing bubbles soft and fine.  Alas for me, I was no swimmer, so I lost my Clementine.  (Verse 4)

Somehow in my mind the chorus and verse one conjured up images of a loved one lost.   I could go with a father who lost his daughter, I think, but my instinct was to just sing the chorus and in my own romantic storytelling I pictured a sweetheart separated forever from her one true love.   You are lost and gone forever, dreadful sorry Clementine.   Think poor man’s version of the final scene in Casablanca.   Here’s looking at you, Clementine.

At any rate, in the Show Boat song Clementine was not a dainty heroine.   She wore size nine sandals.  I put that in the category of too much information.  Also,  I don’t know how anyone could make sandals out of herring boxes, but then as the old saying goes Necessity is the mother of invention.  Score Clementine high on the creativity scale and also off the charts on kindness for hustling the little ducklings down to the water every morning.   And then deduct points for going too close to the water when she clearly can’t swim.   She hits her head against a splinter which must be the biggest splinter in the world because it knocks her into the water and we see in verse four that she drowns for lack of a lifeguard.   I have to say I never learned these verses. 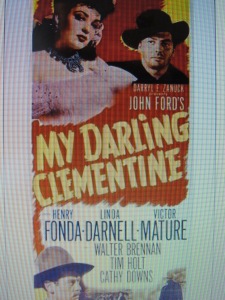 The good news is the legend of Clementine lived on.  Luckily, alternative lyrics were created and the mystique of her melody became the theme song in the sound track of John Ford’s 1946 classic western My Darling Clementine starring Linda Darnell in the title role.   No mention was made of her shoe size or any ducklings in the film.

In the rock ‘n roll years of the 1950s and 60s Bobby Darin and Jan and Dean created their own Clementine tunes and more recently in the 2004 film Eternal Sunshine of the Spotless Mind, Kate Winslet’s name is Clementine and she isn’t happy about it.

I have gone over the deep end and must come back so I will close with this alternative stanza I found among the ruins of countless verses never sung by The Show Boat Four (plus piano).

Now you kids may learn the moral of this little tale of mine, Artificial respiration would have saved my Clementine.

Sheila Morris is a personal historian, essayist with humorist tendencies, lesbian activist, truth seeker and speaker in the tradition of other female Texas storytellers including her paternal grandmother. In December, 2017, the University of South Carolina Press published her collection of first-person accounts of a few of the people primarily responsible for the development of LGBTQ organizations in South Carolina. Southern Perspectives on the Queer Movement: Committed to Home will resonate with everyone interested in LGBTQ history in the South during the tumultuous times from the AIDS pandemic to marriage equality. She has published five nonfiction books including two memoirs, an essay compilation and two collections of her favorite blogs from I'll Call It Like I See It. Her first book, Deep in the Heart: A Memoir of Love and Longing received a Golden Crown Literary Society Award in 2008. Her writings have been included in various anthologies - most recently the 2017 Saints and Sinners Literary Magazine. Her latest book, Four Ticket Ride, was released in January, 2019. She is a displaced Texan living in South Carolina with her wife Teresa Williams and their dogs Spike, Charly and Carl. She is also Naynay to her two granddaughters Ella and Molly James who light up her life for real. Born in rural Grimes County, Texas in 1946 her Texas roots still run wide and deep.
View all posts by Sheila Morris →
This entry was posted in Humor, Life, Personal, Random, Reflections, Slice of Life, The Way Life Is and tagged bob moody, eternal sunshine of the spotless mind, forgotten radio years, john ford's my darling clementine, kate winslet, ken christie, leonard stokes, linda darnell, oh my darling clementine, scrappy lambert, the maxwell house show boat four, tubby weyant. Bookmark the permalink.