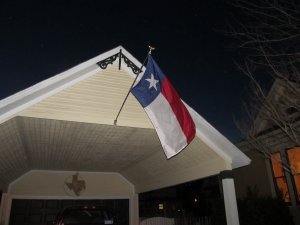 Texas Independence Day was yesterday March 2nd. and I didn’t remember until today so I am turning back time and celebrating today.  My Lone Star flag has been in the garage since December when my neighbor across the street rescued it from being blown away by hurricane force winds while I was in South Carolina.   Tonight my new next-door neighbors rescued me from certain disaster on my ladder and returned the flag to its rightful position on the garage.  But, I didn’t stop there… 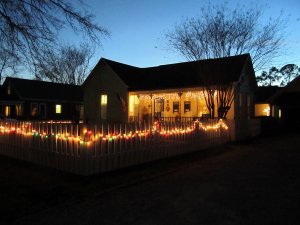 I knew there was a good reason I didn’t totally take down the Christmas lights yet and what could be more appropriate than firing up the lights in March for Independence Day?   For all of my readers who weren’t required to take Texas history in the fourth grade, March 2, 1836, was the day a group of disgruntled men met in a small frame building in a remote place called Washington-on-the-Brazos and signed a Declaration of Independence from Mexico.  Needless to say, the Mexicans were as fired up as my lights and a short war ensued.  And I do mean short.  On April 21, 1836, the Battle of San Jacinto was won by the legendary General Sam Houston over his adversary General Santa Ana and the Republic of Texas was born.

And such is the stuff dreams are made of.  Words like independence and equality roll off the tongue as easily as chocolate and marshmallows for me today and I need to slap myself periodically to guard against my personal archenemy, Complacency.  I had a good lesson last week from a PBS documentary called Makers: Women Who Make America.  From Bella Abzug to Betty Friedan to Shirley Chisholm to Geraldine Ferraro to Barbara Jordan to Billie Jean King to Ruth Bader Ginsberg to Sonia Sotamayor to Elena Kagan to Sandra Day O’Connor to Gloria Steinem to Oprah Winfrey to Ellen DeGeneres to Nancy Pelosi to Patricia Schroeder to Hillary Clinton to Rita Mae Brown to Meryl Streep who narrated the program, I re-lived the significance of these pioneers in American history and the contributions they made to my own opportunities in the 1960s and beyond.   Personal s-a-c-r-i-f-i-c-e, and I have to be careful to say this word slowly so as not to underestimate its importance, and dogged determination to move the cause for basic human rights for gender equality forward made these women true heroines and  the past sixty years a tumultuous time of two steps forward and one step back.

And yet, while I was in the process of earning degrees from universities to enter a workplace where I was worried about equal pay for equal work and domestic partner benefits for lesbians or other social justice issues, my sisters in  countries outside the United States worried about a crust of bread for their daughter or shelter from the elements or a chance for any education at all.  If you are one of my regular readers, you know I can hardly resist the urge to quote the great western philosopher Garth Brooks and tonight is no exception.

So tonight I celebrate Texas Independence and the heritage I have as a native and, thanks to the genealogical research of one of my cousins, daughter of the Republic of Texas.  Freedom and liberty and equality have exacted a price and require my ongoing commitment and diligence.  Compassion and empathy and courage will define my character.   As my daddy used to tell me,  you can take the girl out of Texas, but you can’t take Texas out of the girl. 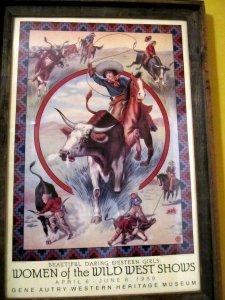 Sheila Morris is an essayist with humorist tendencies who periodically indulges her desires to write outside her genre by trying to write fiction and poetry. In December, 2017, the University of South Carolina Press published her collection of first-person accounts of a few of the people primarily responsible for the development of LGBTQ organizations in South Carolina. Southern Perspectives on the Queer Movement: Committed to Home will resonate with everyone interested in LGBTQ history in the South during the tumultuous times from the AIDS pandemic to marriage equality. She has published five nonfiction books including two memoirs, an essay compilation and two collections of her favorite blogs from I'll Call It Like I See It. Her first book, Deep in the Heart: A Memoir of Love and Longing received a Golden Crown Literary Society Award in 2008. Her writings have been included in various anthologies - most recently the 2017 Saints and Sinners Literary Magazine. Her latest book, Four Ticket Ride, was released in January, 2019. She is a displaced Texan living in South Carolina with her wife Teresa Williams and their dogs Spike and Charly. Her Texas roots are never far from her thoughts.
View all posts by Sheila Morris →
This entry was posted in Humor, Lesbian Literary, Life, Personal, Random, Reflections, Slice of Life, The Way Life Is and tagged pbs documentary women who make america, texas independence day. Bookmark the permalink.