My, oh, my. Hurricane Matthew has brought just enough moisture to our back yard to ensure our little dog Charly  refuses to step outside. Barely a drizzle. A wisp of a breeze. But Charly has stood several times at the kitchen door we left open wide for her today, lifted her head for a sniff of the air pressure, turned around and returned to her place on the sofa to watch the TV for more news on Matthew’s path which is apparently to get closest to land in Charleston, South Carolina during the night tonight. The little dog clearly knows Casa de Canterbury is only a hop, skip and jump away from Charleston and obviously has a lot of free-floating anxiety, as do the rest of us.

Thanks to our good friend Ann in Pennsylvania for the portable charger idea yesterday. We went right out to the Office Depot and bought one this morning, and I am delighted  to report there are picture illustrations of how to use it since the font of the instructional brochure is Thumbelina size and impossible for my eyes to decipher.

Speaking of eyes, Pretty took me to a new eye doctor today because my regular eye doctor referred me to someone else for a possible surgery to re-attach a muscle in each eye that holds up my eyelids and has separated from its proper place due to guess what? Old age. Another hit for the home team known as Sheila’s Senior Fall – Aparts; the hits just keep on coming. Now drooping eyelids…hm…so many drooping body parts.

The good news is Medicare will cover the procedure – the bad news is the surgery has the potential to activate the sleeping shingles nerve in my right eye and that would be a huge nightmare so now to do or not to do the surgery is the question. Sigh. Time to consult the old crystal ball if we can find it.

Thanks also to my cousin Anne in Texas for the advice on the rocking chairs on the front porch. I have taken precautions and battened down those hatches to keep them safe. I have one Mounds bar remaining and am fighting the impulse to risk another run to the CVS drug store for the Buy One – Get the Second One for – a – Quarter Sale. The rockers should be safe, but the candy supply is already iffy.

OMG, we came home to this sight at our neighbor’s house this afternoon. 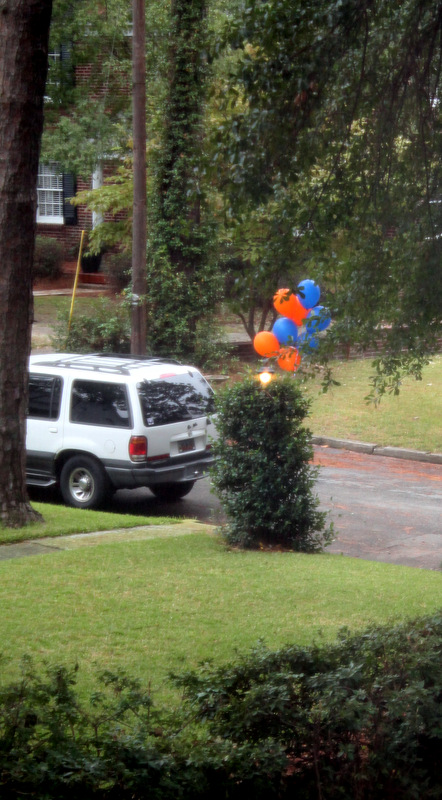 The little girl who lives next door turns eight today and is having a birthday party. Lots of little girls in dresses being brave and ignoring Hurricane Matthew. Charly should take a lesson from them.

Pretty continues the battle with her knee recovery regardless of Hurricane Matthew’s path. The City of Columbia continued trash collection today. The US Postal Service delivered the usual bills to Casa de Canterbury, and Spike sounded the alarm that the Evil Postman had arrived this afternoon. The South Carolina Electric and Gas spokesman advised that extra crews are on the way to help our state with restoring power that may be lost. The Governor called out the National Guard, the President declared we are a national disaster waiting to happen, and I am about to eat the one remaining Mounds candy bar. That about sums it up, don’t you think?

Sheila Morris is an essayist with humorist tendencies who periodically indulges her desires to write outside her genre by trying to write fiction and poetry. In December, 2017, the University of South Carolina Press published her collection of first-person accounts of a few of the people primarily responsible for the development of LGBTQ organizations in South Carolina. Southern Perspectives on the Queer Movement: Committed to Home will resonate with everyone interested in LGBTQ history in the South during the tumultuous times from the AIDS pandemic to marriage equality. She has published five nonfiction books including two memoirs, an essay compilation and two collections of her favorite blogs from I'll Call It Like I See It. Her first book, Deep in the Heart: A Memoir of Love and Longing received a Golden Crown Literary Society Award in 2008. Her writings have been included in various anthologies - most recently the 2017 Saints and Sinners Literary Magazine. Her latest book, Four Ticket Ride, was released in January, 2019. She is a displaced Texan living in South Carolina with her wife Teresa Williams and their dogs Spike and Charly. Her Texas roots are never far from her thoughts.
View all posts by Sheila Morris →
This entry was posted in Humor, Personal, Reflections and tagged Hurricane Matthew. Bookmark the permalink.