Transformers That Go BOOM in the Night!

Howling winds that blew buckets and buckets of rain all night were the demons that kept Pretty and me awake with jangling nerves as Hurricane Matthew pushed up the South Carolina coast to finally make land in the little fishing town of  McClellanville at some point this morning. McClellanville is between Charleston and Myrtle Beach and was devastated by Hurricane Hugo in 1989. It’s just 150 miles south of Casa de Canterbury and Matthew let us know how far he could reach with his power and fury beginning late yesterday afternoon as he whipped up the atmosphere around us before ending a little while ago with a whimper of light breezes and drizzle. Adios, Matthew. Good-bye. Good riddance.

This was our conversation every hour on the hour while the hurricane winds and rain beat against our bedroom window panes on the second floor.

Me: “I think we need to go down to the first floor and spend the night in the living room.”

Pretty: “Let’s wait a little while and see how it goes.”

Me: “I can see the trees moving in the shadows on the blinds, and I’m worried one of them might fall on our heads.”

Pretty: “Yes, I’m worried about that, too. Let me check Facebook to see what everyone else is doing.”

Me: “In the middle of the night during a hurricane you’re checking Facebook?”

Pretty:  “Yes. I want to know how my friends are doing.”

Me: “Your friends are sound asleep in the living rooms on the first floor of their houses.”

Pretty: Silence. She closes her computer and pretends to sleep. I shut up.

At four o’clock a transformer in our neighborhood went out with a Loud BOOM that shook our house. Pretty and I sat up straight and I muttered obscenities while Pretty reached down to comfort Spike who started to shake. Charly jumped up from her place at the bottom of the bed and flew to get between Pretty and me. We were all undone and waited for something terrible to happen.

Miraculously the ceiling fan continued its pattern of movement and my electric digital clock kept on ticking. The winds and downpour were still swirling around us, but we remained relatively unscathed on the second floor of Casa de Canterbury. 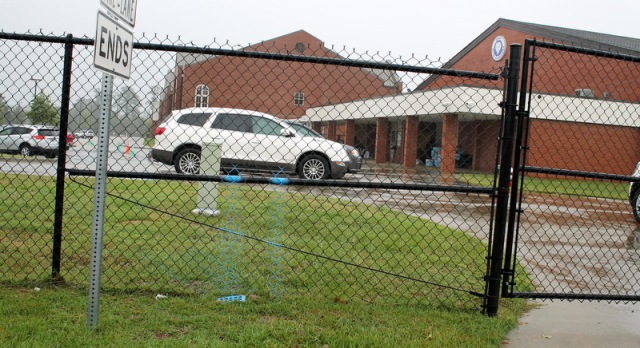 Dent Middle School not far from our house

was a temporary shelter for low country evacuees

We understand that we were very lucky to have minimal problems when so many across our state and our sister states along the southeastern Atlantic coastline suffered severe losses of property and lives. For that, Pretty and I are grateful. We talked the past few days about the people of Haiti and the plight they have in the aftermath of Hurricane Matthew. Unimaginable devastation. Ongoing horrors and nightmares.

Pretty is happily back on Facebook in the light of day and told me about the neatest post on Usain Bolt, the Olympian runner, who has donated $10 million dollars to the Haiti rebuilding efforts. That made me truly happy. May it all end up in the hands that need it most.

Thank you to everyone who has been concerned about Casa de Canterbury and its family during Hurricane Matthew. The comments, prayers and well wishes have been wonderful and very much appreciated by Pretty, Charly, Spike and me.

Sheila Morris is an essayist with humorist tendencies who periodically indulges her desires to write outside her genre by trying to write fiction and poetry. In December, 2017, the University of South Carolina Press published her collection of first-person accounts of a few of the people primarily responsible for the development of LGBTQ organizations in South Carolina. Southern Perspectives on the Queer Movement: Committed to Home will resonate with everyone interested in LGBTQ history in the South during the tumultuous times from the AIDS pandemic to marriage equality. She has published five nonfiction books including two memoirs, an essay compilation and two collections of her favorite blogs from I'll Call It Like I See It. Her first book, Deep in the Heart: A Memoir of Love and Longing received a Golden Crown Literary Society Award in 2008. Her writings have been included in various anthologies - most recently the 2017 Saints and Sinners Literary Magazine. Her latest book, Four Ticket Ride, was released in January, 2019. She is a displaced Texan living in South Carolina with her wife Teresa Williams and their dogs Spike and Charly. Her Texas roots are never far from her thoughts.
View all posts by Sheila Morris →
This entry was posted in Personal, photography, Reflections and tagged haiti disaster, Hurricane Matthew, McClellanville, sc, usain bolt. Bookmark the permalink.

6 Responses to Transformers That Go BOOM in the Night!