Ok, so I know I promised to avoid politics this week, but hey, the week is almost over and it’s hard to ignore the Women’s March taking place in Washington, D.C. and across the USA with overflows in Europe and Australia thrown in for good measure.

Half a million marchers in DC, another 100,000 in New York City, thousands more in Chicago, Denver, Atlanta, London, Sydney, the hits just keep on rolling…Sweet Lady Gaga, as The Red Man would have said if he could have seen the TV coverage today.

Never let it be said that South Carolina is out of the loop when it comes to a good march for equal rights. We’ve been marching for more than 25 years in our state for LGBT equality, and Pretty and I have stood beside the rest of the supporters of our community as we tried to effect common sense values of fairness and equal opportunity for every citizen in the state.

Today the South Carolina Progressive Network, a coalition of partner organizations promoting progressive ideas and actions in our state, organized a local Stand Up rally in solidarity with the Women’s March in DC.

Sis-in-law Darlene drove down from the Upstate to rally with us – she made it in time for pancakes at the Snyder house. She and Pretty talk politics to warm themselves up for the march. Thanks so much to Dave and Saskia and Finn for their hospitality to make sure we got off to a good start. 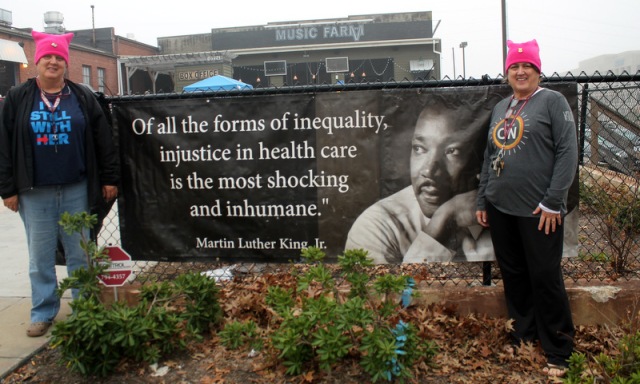 Thanks to sis-in-law who brought Pink Hats for all three of us – we were pictures of true solidarity. The venue was supposed to be on the State House steps, but inclement weather forced us to gather at the Music Farm, a local restaurant/bar/band spot.

No shortage of signs at the rally 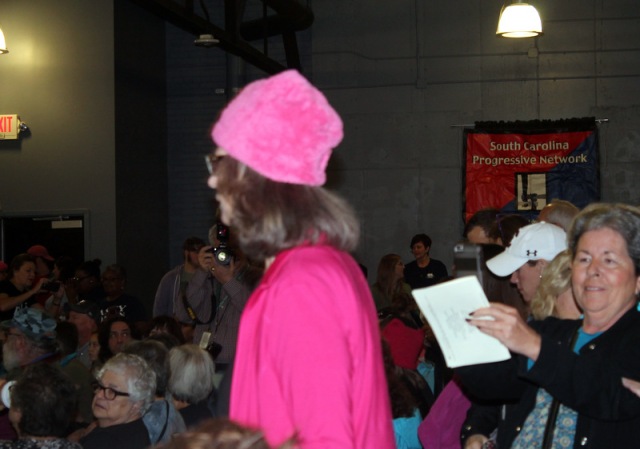 No shortage of pink hats, either

Hundreds of marchers stayed at the State House and braved the drizzles that became steady rain because they preferred to be on the actual Capitol grounds while hundreds more came to listen to the speakers at the Music Farm rally. 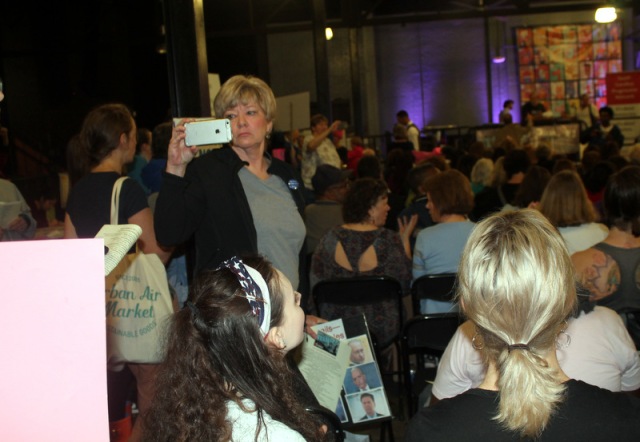 How did anyone ever know anything 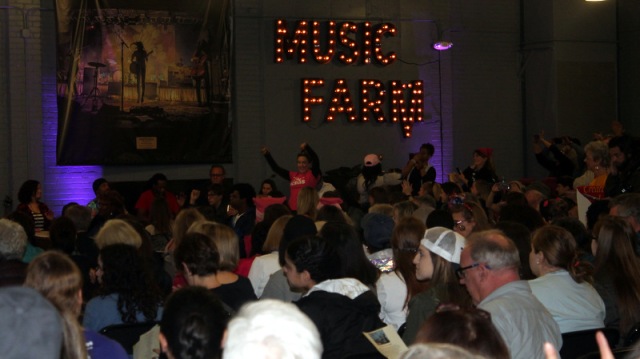 One of the many passionate speakers was Tootsie Holland, a woman who has championed women’s rights since the 1970s during the Equal Rights Amendment ratification struggle in South Carolina. I was thrilled to hear her grandson introduce her – and even more thrilled with her humorous remarks that reminded me of the days when we gathered at her home for strategy sessions of the National Organization for Women back in the day. She hasn’t lost her zeal or edge.

But the person who brought the house down was poet Nikky Finney who read a new poem that both provoked thought and inspired action in this new era of uncertainty in the political environment. Nikky Finney is her own powerful force, a voice for the frustrated and disenfranchised – a voice to be reckoned with. 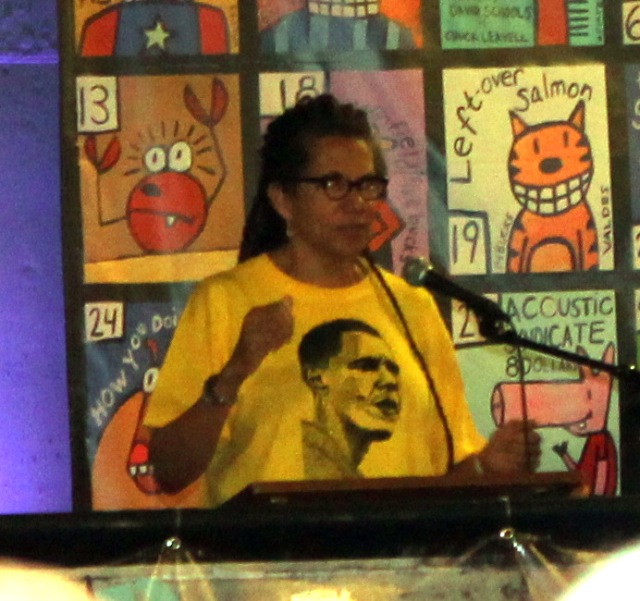 Alrighty then. Fired up – ready to go!

Sheila Morris is a personal historian, essayist with humorist tendencies, lesbian activist, truth seeker and speaker in the tradition of other female Texas storytellers including her paternal grandmother. In December, 2017, the University of South Carolina Press published her collection of first-person accounts of a few of the people primarily responsible for the development of LGBTQ organizations in South Carolina. Southern Perspectives on the Queer Movement: Committed to Home will resonate with everyone interested in LGBTQ history in the South during the tumultuous times from the AIDS pandemic to marriage equality. She has published five nonfiction books including two memoirs, an essay compilation and two collections of her favorite blogs from I'll Call It Like I See It. Her first book, Deep in the Heart: A Memoir of Love and Longing received a Golden Crown Literary Society Award in 2008. Her writings have been included in various anthologies - most recently the 2017 Saints and Sinners Literary Magazine. Her latest book, Four Ticket Ride, was released in January, 2019. She is a displaced Texan living in South Carolina with her wife Teresa Williams and their dogs Spike, Charly and Carl. She is also Naynay to her two granddaughters Ella and Molly James who light up her life for real. Born in rural Grimes County, Texas in 1946 her Texas roots still run wide and deep.
View all posts by Sheila Morris →
This entry was posted in Personal, politics, Reflections, Slice of Life, The Way Life Is and tagged lgbt rights in sc, music farm, nikky finney, sc progressive network, tootsie holland, women's march in dc. Bookmark the permalink.