In 2007 Pretty and I had to make a life-changing decision for my mother Selma because she was unable to make decisions for herself anymore. Like many other Baby Boomers, I was responsible for my mother’s care; I moved her from her home in Rosenberg, Texas to a Memory Care Unit in a long-term care facility in Houston that was 40 miles from her home. She was 80 years old at the time and furious with me for moving her. She was never able to go back to her home. I managed her care from a thousand miles away in South Carolina (and ultimately from a second home in Texas) as she progressed through the various stages of dementia for five years until her death.

My mother’s older brother Charlie had five children – the youngest of my first cousins is Dennis who lived near her Houston residence and visited her while she was there. His mother Mildred and my mother were good friends as well as sisters-in-law. In honor of both of our mothers for Mother’s Day, Dennis sent me this wonderful bittersweet collection of his memories of visits with her in Houston. He calls them Aunt Selma’s funnies.

There was not one time that she did not recognize me upon my entry into this huge warm room that had a giant bird-cage full of birds and a very large aquarium. As soon as she saw me enter and walk towards her, she would smile and kind of turn her face sideways, giving the appearance of a pleasant surprise, and say, “Well looky here, precious darling, you came all that long way to come and see me today! Oh my goodness! ! I just can’t believe it, that you are here. How nice.” “Come on in here now precious,
let’s go to my room, I want you all to myself. Tell me something about the family, anything at all, please?”

Now the “precious darling” quote goes all the way back to Christmases of long ago, the times that our family planned to go to her and my Uncle Glenn’s home for Christmas dinner. We would drive up into the driveway and she would beat us to the welcoming ceremony and come racing out of the house towards us, dressed in a solid red pant suit, hollering “Precious darlings, come on in, come on in!!!” The day was filled with sights and activity that I would usually only get to see every other year or so. A silver Christmas tree, or one that had been flocked, my family never ever had a tree with snow sprayed on it, and as a child, this was most interesting to me, and I always wondered how the white stuff got there and if it was going to disappear one night during the season.

Then there were the card tables set up everywhere with plates and glasses, to be eaten on by the over flow attendance of family members, and then later for cards and dominoes with coffee cups. Upstairs was the giant’play’ room with the pool table, dart board, and golf green runway where you could practice your one shot putting.

Now back to my wonderful Aunt, after this flood of Christmas memory would escape me, as we left other smiling gents and grannies in the Memory Care unit’s commons area and proceeded to her room.

“Aunt Selma, did you hear about that bad storm last night?  There were some houses that were destroyed by the wind, but not one single person was even slightly injured!! And a school bus ran off the road in all that water, and each and every child was pulled from the water and saved.” ” I’m tellin’ you right now Dennis, God is on his throne!!” “Yes, Aunt Selma, indeed he is!”

“Well you know I’ve said this before and now I must say it again, I really do miss Mildred so much and just can’t believe that she is gone!” “I know Aunt Selma, I still can’t believe it either, it just doesn’t seem right.” ‘I know, oh HOW I know, it’s just not right. She always came to see me, she would make those trips down to West Columbia and always stop by and stay a few nights with me. Can’t believe it!” “I know what you mean Aunt Selma.”

“Some one stole my car about two or three years ago, and they took my hearing aids too, they were in the car.”

“You know we have a church service here, but it’s not Baptist.”
“Sheila doesn’t go to church, it hurts, but it will be OK.“
“Here, have a lemon square and a few cookies, I just love them, and they are free. They put this stuff out all the time for us to snack on. Go ahead, take one of these packages of graham crackers also, all are free.”

I expressed a desire to take her out to lunch sometime: “No reason, we can always eat right here, and it’s all free, it’s all on this account that Sheila handles for me.”
“I’m sorry I have to say it again, but I sure miss Mildred, you could call her and ask a question and she would always have the answer, and gave good advice too, you know that?” “Yes Aunt Selma, she sure did.”

“A lot of folks here have a wreath hanging on their door for Christmas, but I don’t.” Oh Aunt Selma I would love to bring you one next time I come.” ‘No thanks precious, that’s being taken care of; someone is bringing me one from my place in Richmond Rosenberg. You know, I used to have a house with all this stuff in it.”
“I’ll try to tell you this without crying, this will be the first Christmas that Sheila can’t make it here to see me.” “Well Aunt Selma, I’ll come to see you then, and I’ll bring one of my nephews with me.” “Okay then, that would be great, then it will be just like all the other Christmases.” “Yes, it sure will.”

Thank you,  Cousin Dennis, for sharing your memories of Aunt Selma’s funnies – and for the visits that inspired them. I had to laugh out loud when you mentioned the “stolen” car comment. Having to take her car away from her was the beginning of the end of her independence. I guess she always knew that on some level.

I miss our mothers especially on Mother’s Day, and I miss you, too. 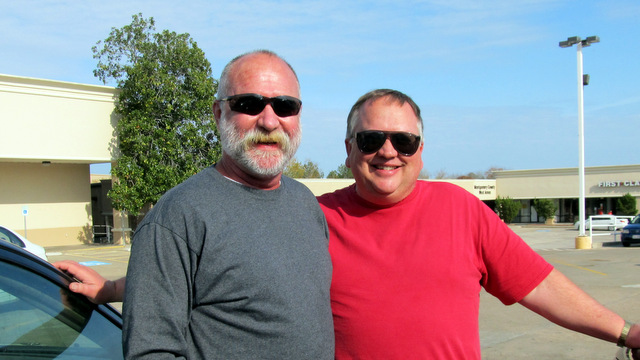 Dennis (r.) and his brother Martin

on their way to visit Aunt Selma

Sheila Morris is a personal historian, essayist with humorist tendencies, lesbian activist, truth seeker and speaker in the tradition of other female Texas storytellers including her paternal grandmother. In December, 2017, the University of South Carolina Press published her collection of first-person accounts of a few of the people primarily responsible for the development of LGBTQ organizations in South Carolina. Southern Perspectives on the Queer Movement: Committed to Home will resonate with everyone interested in LGBTQ history in the South during the tumultuous times from the AIDS pandemic to marriage equality. She has published five nonfiction books including two memoirs, an essay compilation and two collections of her favorite blogs from I'll Call It Like I See It. Her first book, Deep in the Heart: A Memoir of Love and Longing received a Golden Crown Literary Society Award in 2008. Her writings have been included in various anthologies - most recently the 2017 Saints and Sinners Literary Magazine. Her latest book, Four Ticket Ride, was released in January, 2019. She is a displaced Texan living in South Carolina with her wife Teresa Williams and their dogs Spike, Charly and Carl. She is also Naynay to her two granddaughters Ella and Molly James who light up her life for real. Born in rural Grimes County, Texas in 1946 her Texas roots still run wide and deep.
View all posts by Sheila Morris →
This entry was posted in Humor, Life, Personal, Reflections, Slice of Life, The Way Life Is and tagged caregiving, dementia. Bookmark the permalink.