hello, gorgeous – the memories, the music, the magic of Streisand

When Ellen DeGeneres introduced Barbra Streisand on her show a week before Christmas, I was a member of her mesmerized TV viewing audience… but felt something was slightly off kilter from the moment Barbra made her entrance. What was wrong, I thought, as Barbra walked over from my right to greet Ellen in the center of the screen with the typical hug, smile and air kiss. Then Barbra sat down in Ellen’s chair while Ellen sat down across from her. I was gobsmacked – never in all my 15 years of watching Ellen’s show had anyone dared to sit in Ellen’s chair.

I mean, this was like a cosmic shift. I felt my universe begin to rotate counterclockwise.

But the interview confirmed Barbra has a preferred side to be filmed and unfortunately, it was the same side Ellen liked for herself. However, in the interest of fair play (and obtaining the exclusive interview), Ellen gave up her chair for the Streisand visit – and who wouldn’t? Good move, I agreed.

The rare television appearance on the Ellen show was to promote Barbra’s new Netflix concert; and sisters and brothers, I was happy to answer her altar call for the holy church of Streisand music during the holiday season.

Pretty made the mistake of sleeping in later on Christmas morning when I got up to see if Santa Claus had left me anything under the tree and lo and behold, he had. I started a fire in the den fireplace and turned on Netflix to find some Christmas music. The first image I saw was Barbra’s concert she had been talking about on the Ellen show, and I knew I must have been a very good girl to get this surprise from Santa. 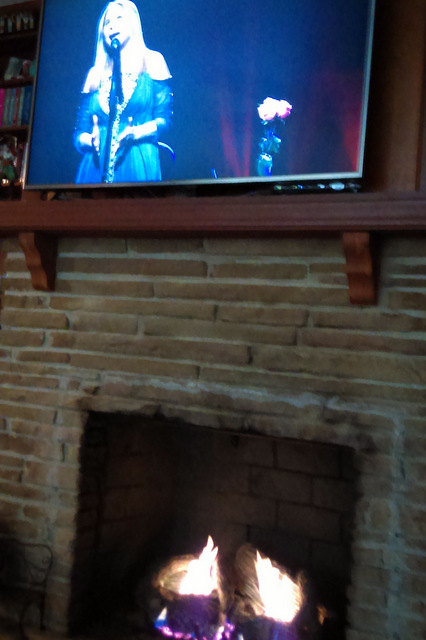 who needs chestnuts roasting on an open fire

Pretty got up in time to see Jamie Foxx and Barbra sing Climb Every Mountain together after the intermission, and she was hooked, too. They made some majestic music together.

I have to admit I’ve skipped quite a few football bowl games this year that I normally would never miss – in favor of listening several times to the Streisand concert on Netflix. But when a concert begins with The Way We Were, hang on to your misty water-colored memories and settle in for the musical magic that the incomparable Barbra Streisand has brought to us for six decades…that would be 60 years, but who’s counting.

Sheila Morris is a personal historian, essayist with humorist tendencies, lesbian activist, truth seeker and speaker in the tradition of other female Texas storytellers including her paternal grandmother. In December, 2017, the University of South Carolina Press published her collection of first-person accounts of a few of the people primarily responsible for the development of LGBTQ organizations in South Carolina. Southern Perspectives on the Queer Movement: Committed to Home will resonate with everyone interested in LGBTQ history in the South during the tumultuous times from the AIDS pandemic to marriage equality. She has published five nonfiction books including two memoirs, an essay compilation and two collections of her favorite blogs from I'll Call It Like I See It. Her first book, Deep in the Heart: A Memoir of Love and Longing received a Golden Crown Literary Society Award in 2008. Her writings have been included in various anthologies - most recently the 2017 Saints and Sinners Literary Magazine. Her latest book, Four Ticket Ride, was released in January, 2019. She is a displaced Texan living in South Carolina with her wife Teresa Williams and their dogs Spike, Charly and Carl. She is also Naynay to her two granddaughters Ella and Molly James who light up her life for real. Born in rural Grimes County, Texas in 1946 her Texas roots still run wide and deep.
View all posts by Sheila Morris →
This entry was posted in Humor, Lesbian Literary, Life, Personal, photography, racism, Random, Reflections, sexism, Slice of Life, The Way Life Is and tagged barbra streisand concert on netflix, ellen de generes, holiday music, jamie foxx, the way we were. Bookmark the permalink.

6 Responses to hello, gorgeous – the memories, the music, the magic of Streisand