Spike’s bark was loud, much louder than his usual warning bark for the intruder who dares to walk past his house on Cardinal Drive in the early morning hours before Pretty, Charly and I have roused ourselves from sleep to greet another Sunday.

But then Spike’s bark became a long higher-pitched wailing sound as he raced into our bedroom and jumped with full force on Pretty as if to say wake up, wake up, you Sleepy Head. I need you.

The impact shook the bed and brought us all to full alert. Charly rose with a menacing growl toward Spike which is what she likes to do anyway. Then she joined in the barking to form a chorus that was way too much for Pretty and me.

I asked Pretty what in the world was going on outside our bedroom so Pretty got up and opened the blinds in time to see a man walking a large black lab up the street as he rounded the corner of Wren and Cardinal. Mystery solved. Spike had remembered his best friend Tennis Ball Obsessed Chelsea, his and our favorite black lab, who left him and the rest of her earthly family two years ago now.

When Spike found us, he became the fifth dog in our home. Unbelievable to think back on that time. How did we manage with five dogs? Very well, thank you for asking.

Out of that pack of five dogs, Spike chose our black lab Chelsea to be his best friend. Spike adored Chelsea but alas, his love for her was unrequited. She didn’t object to his devotion, but she rarely returned it. Chelsea sort of tolerated Spike with good humor.

Now whenever Spike sees a big black lab walking past his house, he thinks it must be Chelsea wagging her tail at him as she passes by. I’d like to think he’s right. 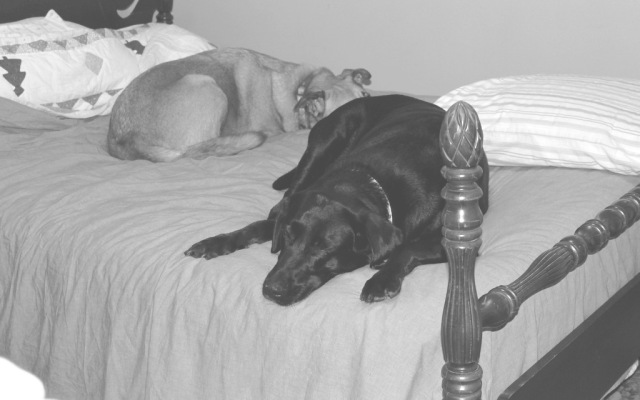 Sheila Morris is a personal historian, essayist with humorist tendencies, lesbian activist, truth seeker and speaker in the tradition of other female Texas storytellers including her paternal grandmother. In December, 2017, the University of South Carolina Press published her collection of first-person accounts of a few of the people primarily responsible for the development of LGBTQ organizations in South Carolina. Southern Perspectives on the Queer Movement: Committed to Home will resonate with everyone interested in LGBTQ history in the South during the tumultuous times from the AIDS pandemic to marriage equality. She has published five nonfiction books including two memoirs, an essay compilation and two collections of her favorite blogs from I'll Call It Like I See It. Her first book, Deep in the Heart: A Memoir of Love and Longing received a Golden Crown Literary Society Award in 2008. Her writings have been included in various anthologies - most recently the 2017 Saints and Sinners Literary Magazine. Her latest book, Four Ticket Ride, was released in January, 2019. She is a displaced Texan living in South Carolina with her wife Teresa Williams and their dogs Spike, Charly and Carl. She is also Nana to her granddaughter Ella James born 10-01-2019. Born in rural Grimes County, Texas in 1946 her Texas roots still run wide and deep.
View all posts by Sheila Morris →
This entry was posted in Humor, Lesbian Literary, Life, Personal, photography, politics, racism, Reflections, Slice of Life, The Way Life Is and tagged dog memory, rescued dogs. Bookmark the permalink.