Our first summer last year with a swimming pool was a real adventure – our yard is a frog mecca teeming with loud nocturnal noises, and unfortunately the frogs can’t distinguish a chlorinated pool from a perfectly wonderful fresh water pond. Therefore, every morning during the frog summer season last year I rose early to check the skimmer basket for our pool and usually found a frog, sometimes two, battling the effects of the chemicals.

I had a little net that I used to pluck them from the skimmer and release them to make their way to safety far away from the poisonous fake pond. I was always so happy to see them hop away and hoped they remained part of our nighttime chorus which continues to be noisy this year.

This year is different, though. At some point during a dinner conversation with friends several months ago I talked about my remorse for the frogs who lost their way and ended up in our skimmer basket. One of the friends at the table told me about something called a Frog Log that was an escape route for creatures caught in their frantic search for a way out of their precarious situation as they were engulfed by an overwhelming tide that had betrayed them.

She went on to say I could order one on Amazon…which is exactly what I did. Behold, the Frog Log. 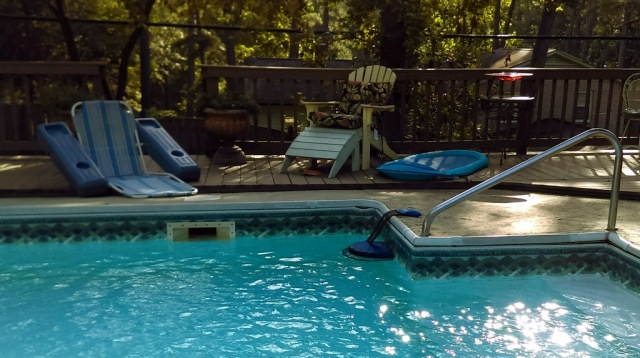 such a simple, yet brilliant idea 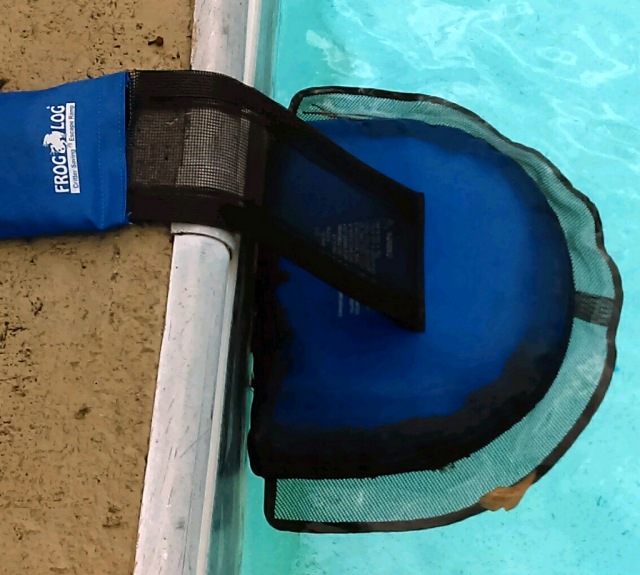 So now I am wondering if we could invent a People Log that would offer us a rescue route from our worries, problems, angst, nightmares, depression, sorrows, panic attacks…a way out when we found ourselves in the wrong pond overwhelmed by the vicissitudes of life, as my daddy used to say when he was at a loss for describing personal turbulence.

The good news today is that this summer I have had only one frog in the skimmer basket. The loud frog choruses still pierce the summer heat with their deep bass voices – Pretty and I see the frogs hopping in our yard and around the pool at night when we walk outside with Charly and Spike, but the Frog Log apparently is the real deal.

If anyone comes up with that People Log invention, please let me know.

I promise to stay tuned. I hope you will, too.

Sheila Morris is an essayist with humorist tendencies who periodically indulges her desires to write outside her genre by trying to write fiction and poetry. In December, 2017, the University of South Carolina Press published her collection of first-person accounts of a few of the people primarily responsible for the development of LGBTQ organizations in South Carolina. Southern Perspectives on the Queer Movement: Committed to Home will resonate with everyone interested in LGBTQ history in the South during the tumultuous times from the AIDS pandemic to marriage equality. She has published five nonfiction books including two memoirs, an essay compilation and two collections of her favorite blogs from I'll Call It Like I See It. Her first book, Deep in the Heart: A Memoir of Love and Longing received a Golden Crown Literary Society Award in 2008. Her writings have been included in various anthologies - most recently the 2017 Saints and Sinners Literary Magazine. Her latest book, Four Ticket Ride, was released in January, 2019. She is a displaced Texan living in South Carolina with her wife Teresa Williams and their dogs Spike and Charly. Her Texas roots are never far from her thoughts.
View all posts by Sheila Morris →
This entry was posted in Humor, Lesbian Literary, Life, Personal, photography, politics, racism, Reflections, Slice of Life, The Way Life Is and tagged frog logs. Bookmark the permalink.