my mother reads from Deep in the Heart

“I love this book,” my eighty-three-year-old mother says, startling me awake from my nap with her words. I had drifted off while sitting in the dark blue recliner in her room in the memory care unit of the assisted living facility she’d called home for the past two years. She was asleep when I sat down in the recliner.

I open my eyes to see her sitting across from me. She’s in the small wooden chair with the straight back. I can’t believe she’s holding the copy of my book, Deep in the Heart, which I gave her two years ago. I never saw the book since then on any of my visits, and I assumed she either threw it away or lost it. I was also stunned to see how worn it was. The only other book she had that I’d seen in the same condition was The Holy Bible.

“I know all of the people in this book,” she continues. “And so many of the stories, too.”

And then with wonder, I hear another reader say my words. My mother reads to me as she rarely did when I was a child. She was always too busy with the tasks of studying when she went to college, preparing for classes when she taught school, cooking, cleaning, ironing, practicing her music for Sunday and choir practice – she couldn’t sit still unless my dad insisted she stop to catch her breath.

But, today, she reads to me. She laughs at the right moments and makes sure to read “with expression” as the teacher in her remembers. Occasionally, she turns a page and already knows what the next words are. I’m amazed and moved. I have to fight the tears that could spoil the moment for us. I think of the costs of dishonesty on my part, and denial on hers. The sense of loss is overwhelming.

The words connect us as she reads. For the first time in a very long while, we’re at ease with each other. Just the two of us in the little room with words that renew a connection severed by a distance not measured by miles. She chooses stories that are not about her and her daughter’s differences. That’s her prerogative, because she’s the reader.

She reads from a place deep within her that has refused to surrender these memories. When she tires, she closes the book and sits back in the chair.

“We’ll read some more another time,” she says.

I lean closer to her.

“Yes, we will. It makes me so happy to know you like the book. It took me two years to write these stories, and I’m glad you enjoy them so much.”

“Two years,” she repeats. “You have a wonderful vocabulary.”

Note this is an excerpt from a chapter called The Dementia Dialogues – Stage 1 from my book: 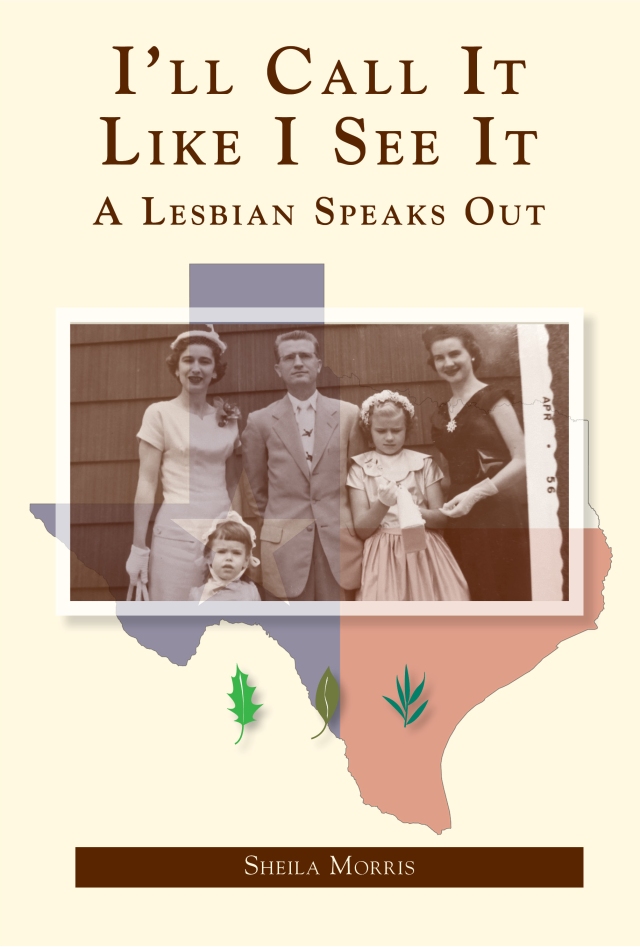 The mysterious mother – daughter relationship complicated by a thief we call dementia is one of the themes of one of my favorite books. The cover shows a ten-year-old me struggling with gloves I’m sure I didn’t want to wear standing between my hip crew-cut dad and my correctly posed mom, my favorite aunt Lucille standing next to her brother, and my aunt’s daughter Melissa looking somewhat perplexed in an adorable bonnet sure to be the hit of the Easter service at the Richards Baptist Church.

Sheila Morris is a personal historian, essayist with humorist tendencies, lesbian activist, truth seeker and speaker in the tradition of other female Texas storytellers including her paternal grandmother. In December, 2017, the University of South Carolina Press published her collection of first-person accounts of a few of the people primarily responsible for the development of LGBTQ organizations in South Carolina. Southern Perspectives on the Queer Movement: Committed to Home will resonate with everyone interested in LGBTQ history in the South during the tumultuous times from the AIDS pandemic to marriage equality. She has published five nonfiction books including two memoirs, an essay compilation and two collections of her favorite blogs from I'll Call It Like I See It. Her first book, Deep in the Heart: A Memoir of Love and Longing received a Golden Crown Literary Society Award in 2008. Her writings have been included in various anthologies - most recently the 2017 Saints and Sinners Literary Magazine. Her latest book, Four Ticket Ride, was released in January, 2019. She is a displaced Texan living in South Carolina with her wife Teresa Williams and their dogs Spike, Charly and Carl. She is also Naynay to her two granddaughters Ella and Molly James who light up her life for real. Born in rural Grimes County, Texas in 1946 her Texas roots still run wide and deep.
View all posts by Sheila Morris →
This entry was posted in Humor, Lesbian Literary, Life, Personal, Reflections, Slice of Life, The Way Life Is and tagged deep in the heart: a memoir of love and longing, dementia stages, i'll call it like I see it: a lesbian speaks out, mother daughter relationships. Bookmark the permalink.

6 Responses to my mother reads from Deep in the Heart