I TAWT I TAW A PUTTY TAT, but Mick says I didn’t

Give credit where credit is due. Mick Mulvaney was actually born in Alexandria, Virginia – not South Carolina, according to his Wikipedia profile, and grew up in Charlotte, North Carolina. He didn’t attend any schools or colleges in South Carolina but at some point in his life he moved to a Charlotte suburb called Indian Land which is, indeed, just across the state line in South Carolina.

His political career began with four years in the SC state legislature so my state gets total recognition for the man who would be Acting Chief of Liars in the West Wing of the current chaotic administration that belongs to Agent Orange turning to Red.

Here’s the thing, Mick. I watched your entire infamous press conference last Thursday, the 17th., in living color on a regular tv from my favorite ancient recliner in the den. I wasn’t streaming on any devices. I didn’t take a break to go to the kitchen to get a Butterfinger.  I didn’t walk around outside with my dogs. No one interrupted your comments by calling or texting me. Nope. I saw the whole thing. 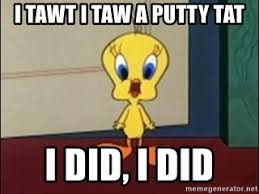 Several hours after I watched you spell out Agent Orange’s foreign policy as a pay for play high stakes game with our national security twisting in the wind, you called Mulligan which is a word used by golfers to get another shot when they knock the ball so far out of the fairway they’ll never find it in the woods. Mulligan, mulligan, you cried. I never said any of that about Quid Pro Quo or any of those other things like Get Over It or We do it (foreign policy) All the Time This Way. Never. Never. Never. It’s just those mean old liberal media peeps getting the words turned around to suit their evil intentions to undermine Agent Orange who is, as we all know, out to make not only America great again but restore Civilization as well.

Hm. I wonder if you still have that minority interest in Salsarita’s restaurant chain? Maybe that experience will qualify you for an executive position in the successful hospitality business you claim is the ultimate goal of Agent Orange “in the end.”

Because the end is headed your way as surely as a freight train coming at you. There’s no light at the end of your tunnel.

Sheila Morris is a personal historian, essayist with humorist tendencies, lesbian activist, truth seeker and speaker in the tradition of other female Texas storytellers including her paternal grandmother. In December, 2017, the University of South Carolina Press published her collection of first-person accounts of a few of the people primarily responsible for the development of LGBTQ organizations in South Carolina. Southern Perspectives on the Queer Movement: Committed to Home will resonate with everyone interested in LGBTQ history in the South during the tumultuous times from the AIDS pandemic to marriage equality. She has published five nonfiction books including two memoirs, an essay compilation and two collections of her favorite blogs from I'll Call It Like I See It. Her first book, Deep in the Heart: A Memoir of Love and Longing received a Golden Crown Literary Society Award in 2008. Her writings have been included in various anthologies - most recently the 2017 Saints and Sinners Literary Magazine. Her latest book, Four Ticket Ride, was released in January, 2019. She is a displaced Texan living in South Carolina with her wife Teresa Williams and their dogs Spike, Charly and Carl. She is also Naynay to her two granddaughters Ella and Molly James who light up her life for real. Born in rural Grimes County, Texas in 1946 her Texas roots still run wide and deep.
View all posts by Sheila Morris →
This entry was posted in Humor, Lesbian Literary, Life, Personal, politics, racism, Reflections, Slice of Life, The Way Life Is and tagged foreign policy, mick mulvaney, mulligan, tweety bird, Ukrainian cluster, us quid pro quo. Bookmark the permalink.

10 Responses to I TAWT I TAW A PUTTY TAT, but Mick says I didn’t