Post Cards From The Heart – Lucia Leaves Home. The End.

First comes love, then comes marriage.  Then comes Luke and Bessie pushing a baby carriage.   Lucia Catherine was the occupant of this particular baby carriage and she was the only child of their marriage.  Expectations for a Luke, Jr., turned happily into a Lucia somewhere between 1908 and 1916, the date of the first post card addressed to Miss Lucia Moore in our collection.

Aunt Sadie give me this to send to your baby. This is me and Little Snookie on front.

To Lucia Moore from Dorothy Parker

I hope Old Santa will be good to you this Xmas and that you have a Merry Xmas and a Happy New Year,  Allen & M.M.

Dear Little Lucia Catherine, I rec’d your pictures yesterday and they are as sweet and pretty as can be.  I am sure you are a fine little girl and your Mother and Papa are awfully proud you came to live with them.  My little Edna Mae is on the Mexican border with her Papa & Mother.  I’ll send her the picture and know she will think it is sweet.  Tell Mother I’ll write her a letter some day.    Miss Florence

Among the cards kept by Bessie was a Thanksgiving post card sent from China, Texas in 1919 to her daughter Lucia.  The handwriting was tiny so all the words could fit the reverse of the holiday card, but Bessie recognized immediately the precise distinctive script of her special friend Florence.   After thirteen years of sporadic correspondence via the penny cards, Bessie would have known that writing even if the card had been unsigned.  China, Texas sounded a world away from Atlanta, Georgia.   Would she ever see her friend again?  If not, she wanted Florence to see pictures of Lucia.   Everyone said Lucia looked just like Bessie had looked when she was a little girl and Florence had told Bessie many years ago how beautiful she was.

Miss Florence hadn’t married evidently and Bessie thought it was good she had a neice she loved.   Tell Mother I’ll write her a letter some day was a lifetime away from Florence’s  Will write you soon message to Bessie  in 1907 and Bessie understood the different destinies their lives had followed with a touch of…what?   Regret?   Relief?   Remorse?   Did she even know herself? 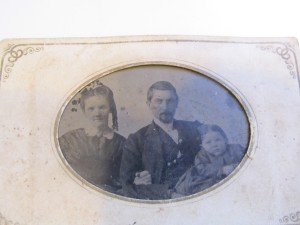 The End As Of Today

For the faithful readers who have followed the odyssey of the Moore family for almost three months now on the blog, I thank you for your patience as I took this blip on my personal radar writing screen for an experiment with historical fiction.   When my partner Teresa brought the picture post card album home from an estate sale at the end of February this year, I was fascinated with the pictures from the turn-of-the-century (twentieth, that is!) cards but had not a clue about the treasures I’d find in the words.  For me, words are worth a thousand pictures and these have not disappointed.   I wish I could share more of them with you, but I have literally hundreds of post cards and fear I have become too attached to them.

The estate sale took place at a home in Columbia and I tagged along with Teresa when she went for a second look.   The house was a modest one in an older middle-class neighborhood not very far from our own home.  I could have walked there if I’d wanted to – which I didn’t.   While Teresa chatted away with her friend Shelley who was in charge of the estate sale, I wandered through the house to see what I could find without spending any money – which I didn’t.   I found an old Bible in a bedroom and opened it to the family section.   From your father, Luke P. Moore  read the inscription.   At the time I didn’t realize how close I would be to Mr. Moore and his family through their post cards in the next few months.

I asked Shelley that night if she knew anything about the family who was leaving this home.   She said she didn’t know much except that it was an elderly woman in her late nineties who was moving into a nursing home because she couldn’t live alone any longer.   Not an uncommon occurrence these days, I thought, as I met Teresa in the kitchen.   She was making her final rounds and asked Shelley to hold several items for her before the sale actually started the following day.

I remember seeing a little navy blue magnet in the shape of a sailing ship on the refrigerator that night as I left the kitchen.   I wish now I’d paid the 25 cents for it.   A tiny white flag had the name Lucia on it.   Lucia Catherine Moon, daughter of Luke and Bessie, was leaving her home and most of her possessions behind, including her mother’s treasured post card album entitled Greetings from Jamestown.    That’s okay, though.   Teresa brought it home to me.

Sheila Morris is a personal historian, essayist with humorist tendencies, lesbian activist, truth seeker and speaker in the tradition of other female Texas storytellers including her paternal grandmother. In December, 2017, the University of South Carolina Press published her collection of first-person accounts of a few of the people primarily responsible for the development of LGBTQ organizations in South Carolina. Southern Perspectives on the Queer Movement: Committed to Home will resonate with everyone interested in LGBTQ history in the South during the tumultuous times from the AIDS pandemic to marriage equality. She has published five nonfiction books including two memoirs, an essay compilation and two collections of her favorite blogs from I'll Call It Like I See It. Her first book, Deep in the Heart: A Memoir of Love and Longing received a Golden Crown Literary Society Award in 2008. Her writings have been included in various anthologies - most recently the 2017 Saints and Sinners Literary Magazine. Her latest book, Four Ticket Ride, was released in January, 2019. She is a displaced Texan living in South Carolina with her wife Teresa Williams and their dogs Spike, Charly and Carl. She is also Nana to her granddaughter Ella James born 10-01-2019. Born in rural Grimes County, Texas in 1946 her Texas roots still run wide and deep.
View all posts by Sheila Morris →
This entry was posted in Humor, Life, Personal, Random, Reflections, Slice of Life, The Way Life Is and tagged historical fiction, life in America in the early 1900s, picture post cards from the early 1900s. Bookmark the permalink.

4 Responses to Post Cards From The Heart – Lucia Leaves Home. The End.