Today, May 22nd., would have been Harvey Milk’s 84th. birthday.  Instead, his life was tragically shortened by five bullets to his head in his office at San Francisco’s City Hall in 1978.  Harvey was one of the first openly gay elected LGBT officials in the entire USA when, on his third try, he was elected to the Board of Supervisors of San Francisco in 1977.  Eleven months later he was murdered by a former board colleague who believed the growing gay movement threatened traditional values.

His life and death have served as an ongoing inspiration to the LGBTQ community in America and around the world. 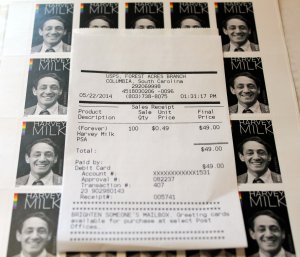 You’ve got to give them hope.  If a bullet should enter my brain,

On this day in 2014 Harvey Milk was honored by his country with the issuance of a forever postage stamp with his image and the colors that symbolize the movement.  Thirty-six years after his death the bullets to his brain destroyed many closet doors.

When I bought 100 stamps this afternoon at the Post Office, the young woman said to me, You are the first person to buy these Harvey Milk stamps.  And I said, You don’t know how thrilled I am to have them.

How appropriate on this coming Memorial Day  to remember an American hero who died for his hopes for equality and justice.

Closet doors have opened at warp speed since Harvey’s time.  He would be amazed, as I am continually, that nineteen states and Washington, D.C. have legalized same-sex marriage.  The number of LGBTQ elected officials has grown exponentially at local, state and federal levels with the support of many organizations including The Victory Fund which has as its mission the appointment and election of members of our own community in order to take a seat at the tables of political power.

Harvey Milk and others like him made possible an event that kicked closet doors open for hundreds of thousands of LGBTQ persons and underscored the perseverance of a community determined to make its mark on the country.  We would not go away. 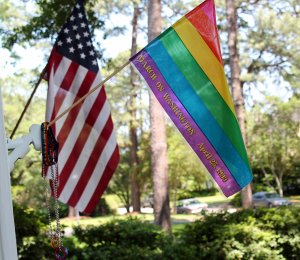 Flag for March on Washington

with two wrist bands and rings from the March

(Memorabilia courtesy of Dick Hubbard and the late Freddie Mullis)

On April 25, 1993 the largest march in the movement’s history was held in Washington, D.C., and the gays and lesbians came running out of their closets to participate.  You just had to be there to take it all in.  Wow.  We were inspired and empowered.  For many of us the closet doors would never be shut again – except from the outside.

If you are a regular with me, you know my heroes have always been cowboys like  Roy Rogers, the Lone Ranger, the Cisco Kid, Wyatt Earp.  These were my guys in white hats and they always righted some wrong or rescued a damsel in distress.  I have a long list of heroes I will remember this Memorial Day weekend, but today I salute Harvey Milk – an ordinary man who committed outrageous acts of courage in his everyday rebellions.

Sheila Morris is a personal historian, essayist with humorist tendencies, lesbian activist, truth seeker and speaker in the tradition of other female Texas storytellers including her paternal grandmother. In December, 2017, the University of South Carolina Press published her collection of first-person accounts of a few of the people primarily responsible for the development of LGBTQ organizations in South Carolina. Southern Perspectives on the Queer Movement: Committed to Home will resonate with everyone interested in LGBTQ history in the South during the tumultuous times from the AIDS pandemic to marriage equality. She has published five nonfiction books including two memoirs, an essay compilation and two collections of her favorite blogs from I'll Call It Like I See It. Her first book, Deep in the Heart: A Memoir of Love and Longing received a Golden Crown Literary Society Award in 2008. Her writings have been included in various anthologies - most recently the 2017 Saints and Sinners Literary Magazine. Her latest book, Four Ticket Ride, was released in January, 2019. She is a displaced Texan living in South Carolina with her wife Teresa Williams and their dogs Spike, Charly and Carl. She is also Nana to her granddaughter Ella James born 10-01-2019. Born in rural Grimes County, Texas in 1946 her Texas roots still run wide and deep.
View all posts by Sheila Morris →
This entry was posted in Humor, Lesbian Literary, Life, Personal, Random, Reflections, Slice of Life, The Way Life Is and tagged 1993 March on Washington, harvey milk stamps, the Victory Fund. Bookmark the permalink.