My cousin Bill died yesterday following a battle with his own body for almost eight years. He was 70 years old.

I spoke with his mother Eloise this morning about my admiration for the courage Bill had displayed throughout his confinement as well as his wife Donna’s steadfast support while she helped her husband through the difficult activities of daily living. Eloise said simply, Bill was a trooper.

Yes. Not all troopers are in the armed services.

This weekend is Memorial Day, and I am immeasurably grateful for every soldier who serves today to protect our country from harm. I appreciate their families, their personal sacrifices, and the bravery required to face our enemies at home and abroad. These enemies multiply even as we alienate our friends and struggle to identify ever-changing battlefields. In the midst of a chaotic world our military personnel are asked to protect and defend us with their own lives if necessary. Thankful seems like such a small word for what our soldiers do, but thankful is how I feel.

My cousin Bill had a very real foe in his war with his health, but he won’t get a medal or ribbon for his valor. Instead, in the end he was surrounded by the love of his family and the hope that he will be remembered as a good man who refused to surrender during a very long haul. A worthy legacy. 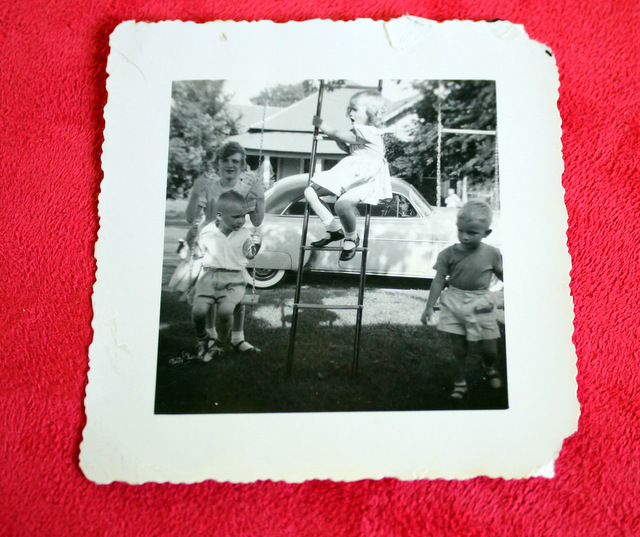 with his sister Frances pushing him,

me climbing the ladder, and Bill trying to ignore us

playing on a swing set at my home in Richards, Texas

only children Bill and me at a family reunion

I will miss Bill. Rest in peace, cousin.

Sheila Morris is a personal historian, essayist with humorist tendencies, lesbian activist, truth seeker and speaker in the tradition of other female Texas storytellers including her paternal grandmother. In December, 2017, the University of South Carolina Press published her collection of first-person accounts of a few of the people primarily responsible for the development of LGBTQ organizations in South Carolina. Southern Perspectives on the Queer Movement: Committed to Home will resonate with everyone interested in LGBTQ history in the South during the tumultuous times from the AIDS pandemic to marriage equality. She has published five nonfiction books including two memoirs, an essay compilation and two collections of her favorite blogs from I'll Call It Like I See It. Her first book, Deep in the Heart: A Memoir of Love and Longing received a Golden Crown Literary Society Award in 2008. Her writings have been included in various anthologies - most recently the 2017 Saints and Sinners Literary Magazine. Her latest book, Four Ticket Ride, was released in January, 2019. She is a displaced Texan living in South Carolina with her wife Teresa Williams and their dogs Spike, Charly and Carl. She is also Nana to her granddaughter Ella James born 10-01-2019. Born in rural Grimes County, Texas in 1946 her Texas roots still run wide and deep.
View all posts by Sheila Morris →
This entry was posted in Lesbian Literary, Life, Personal, politics, Reflections, Slice of Life, The Way Life Is and tagged Memorial Day, william "bill" chester powell. Bookmark the permalink.