While the war took center stage in everyone’s mind in 1942 and my dad noticed that his hunting and fishing buddies in Richards, Texas had a younger sister, apparently hormones were also raging in my dad’s brother Ray who would have been almost twenty years old in April of 1942 when he received a surprise letter in the mail from his mother. It was dated April 27th.

Your daddy and I were tickled with your surprise visit this past weekend. You always have to work, and it was a treat for us to have you home for a whole weekend. I am pleased to see that your appetite is still good. I’ve never seen anyone love chicken and dumplings the way you do!

Now, son, I need to have a serious talk with you about Geneva Walkoviak. I know that you had two dates with her while you were home. We can’t have you getting too serious about Geneva. And, I’m sure you know why. Even though she is pretty and seems sweet enough, the facts are that she is Polish and Catholic and those are two things that don’t mix in our family. You may not be able to appreciate the problems with that, but take my word for it. You stay with your own kind. Now, let’s leave it at that. I know you wouldn’t want to let us down.

Try to make it home for your daddy’s birthday this summer.

Polish. Catholic. Prejudice takes twists and turns through the years, decades, centuries. The names change, but the sentiments do not. Polish people in Richards at that time had a distinct accent – they were often first and second generation immigrants who farmed the contrary Texas land. The children rode a small yellow school bus to the red brick schoolhouse in town carrying the hopes and dreams of their families in tiny brown paper lunch bags. The men and boys got their haircuts at my grandfather’s barbershop. Their money, as is always the case in prejudice, was evidently neither Polish nor Catholic.

Today bigotry is often based on what language is spoken, skin color, or country of origin. Hispanic refugees and others seeking asylum in this country are subjected to inhumane treatment that is unacceptable to all of us who respect the values our nation was founded on: everyone is entitled to life, liberty and the pursuit of happiness. We do not separate children from their mothers and then put them in prison camps. We’ve done that before to African-American slaves whose families were ripped apart and scattered to the four winds. That is not who we think we are. That is not who we are, is it?

What a tangled web we weave in a small rural southeast Texas community consumed by the thought of a war in 1942, and yet my grandmother decided to set aside time to write a letter to my uncle which sadly exhibited the same kinds of prejudice that created anti-Semitism in Germany which was the impetus for the war in the first place, where a name like Walkoviak and a pretty Catholic girl named Geneva could become the target of pointed prejudice.

I am ashamed and saddened by this letter. I do not find it surprising, however, because I remember my grandmother as a wonderful strong funny woman – but flawed. She would have been 39 years old when she wrote that revealing letter to her son. I’m not sure her positions changed during the next forty-five years of her life. She agonized over voting for the Democratic candidate John Kennedy in 1960 because of his Catholicism, for example; but I do recall she relented in later years when her grandson, one of Ray’s sons, married a Catholic girl.

My dad, on the other hand, must have been blissfully unaware of the family drama because three months after his mother’s letter to his brother, he wrote to his parents following a visit  for his father’s birthday on July 29th. His father turned 44 on that birthday. This letter is dated August 1, 1942.

It was good to be home for Daddy’s birthday this week. I’m back at work today, and the grocery store is still standing. And, I’m still stocking shelves. Talk about boring. At least, it gives me money for school and to help Lucy and Terrell with the bills. It’s hard to believe I’ve been in Beaumont for a whole year.

The War is the big topic on campus and off. Doesn’t look like we’re doing very good against the bad guys. Daddy, you better go up to Washington and see Mr. Roosevelt. I think he needs some good advice for a change. You could get things going in the right direction.

I didn’t see much of Ray while we were home. He spends a lot of time with Geneva Walkoviak. She’s the only one he likes to spend money on. Of course, I guess you didn’t see much of me, either. Selma and I went to see the same movie three times. I’m beginning to like her more than her brothers.

Probably won’t be home again until Christmas. The classes are a little harder this year. But, you’ll see that my grades are hanging in there really good. I want you to be proud of me.

Obviously my uncle Ray rejected his mother’s ultimatum and continued to date the pretty Polish girl who happened to be Catholic. That made me smile.

Throughout 1942 the impact of the war came closer and closer to home as more  young men enlisted – teenage boys were leaving their farms, day jobs, and classrooms to join the armed forces. They would soon cross oceans by sea and air to defend their country from the Axis powers.

Ray and his mama 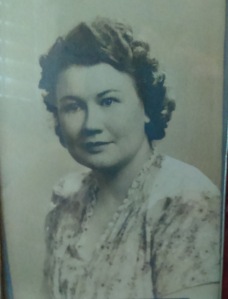 Sheila Morris is a personal historian, essayist with humorist tendencies, lesbian activist, truth seeker and speaker in the tradition of other female Texas storytellers including her paternal grandmother. In December, 2017, the University of South Carolina Press published her collection of first-person accounts of a few of the people primarily responsible for the development of LGBTQ organizations in South Carolina. Southern Perspectives on the Queer Movement: Committed to Home will resonate with everyone interested in LGBTQ history in the South during the tumultuous times from the AIDS pandemic to marriage equality. She has published five nonfiction books including two memoirs, an essay compilation and two collections of her favorite blogs from I'll Call It Like I See It. Her first book, Deep in the Heart: A Memoir of Love and Longing received a Golden Crown Literary Society Award in 2008. Her writings have been included in various anthologies - most recently the 2017 Saints and Sinners Literary Magazine. Her latest book, Four Ticket Ride, was released in January, 2019. She is a displaced Texan living in South Carolina with her wife Teresa Williams and their dogs Spike, Charly and Carl. She is also Nana to her granddaughter Ella James born 10-01-2019. Born in rural Grimes County, Texas in 1946 her Texas roots still run wide and deep.
View all posts by Sheila Morris →
This entry was posted in Humor, Lesbian Literary, Life, Personal, politics, racism, Reflections, Slice of Life, The Way Life Is and tagged Hispanic immigrants, Polish immigrants, separation of children from their mothers, WWII. Bookmark the permalink.