I know how upset you are about my enlisting this summer, but I have to do what I feel is right for me. I’ve finished two years at Lamar College, so I’ll have a good start on my degree when I get home. I want to be the best teacher I can be – just like Mr. Wilcox and Miss Helen McCune and all the others in Richards.

But, I couldn’t stay in college with Ray and everybody else I know going off to fight the Nazis. Even Terrell has signed up for the Navy. Lucy is going to be awful lonesome without her two best guys taking care of her.

I promise you both that I’ll come home safe and sound, okay? Daddy, I’ll be able to make your birthday next month before I have to leave. I’m not sure what assignment I’ll have to start.

P.S. A funny thing happened when I went to enlist. The recruiter told me I was too skinny to be accepted into the Air Force. He told me to go home and eat as many bananas as I could and come back to weigh. I ate so many bananas I was sick, but I weighed just enough to get in.”

George Morris and his two sons plus one in Richards

Glenn, the self-proclaimed college man, was 18 years old – short and skinny –  when he stood in the summer heat in June of 1943 with hundreds of other Texans as the long lines inched toward the door of the recruiting center in Houston. His older brother Ray had joined the Air Force a few weeks earlier at this same site.

both chose to serve in the Army Air Corps in WWII

On July 19, 1943, Private G.L. Morris sent a post card from his first assignment in Laredo, Texas at gunnery school. 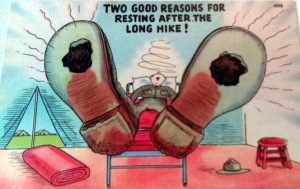 “Dear Folks, Mama, I got your cake yesterday and it must have been pretty good. I got 2 pieces of it before the hounds ate it. They seemed to really enjoy it. Love, Glenn”

My grandmother did the only thing she knew to do to help with the war effort. She baked a cake. (This was a great tradition she continued when I was in college.)

In a memorandum which has come to my desk this morning, I note that your boy has been classified for training as a Navigator in the Army Air Forces.

In order to win this war, it is vital to have the best qualified young men in charge of navigating our bombardment airplanes. Upon them will depend in large measure the success of our entire war effort.

The position of Navigator calls for a high degree of intelligence, alertness and coolness. Not only the success of the mission, but the safety of his crew-mates, depends on the speed and skill with which he performs his calculations. Men who will make good material for training as Navigators are rare. The Classification Board believes that your boy has the necessary reliability, character and mathematical aptitude.

If he shows the progress we confidently expect of him, he will in all probability win his wings as a qualified Navigator. Considering the rigid requirements for this training, you have every reason to be proud of your boy today. I congratulate you and him.

Wow. Clearly General Brant had found his calling after a lengthy career in other areas of military service. I don’t mean any disrespect, but what must he have written to the parents of the pilots…and I do wonder if my grandparents were consoled by his letter on such grand stationery when the fate of both their sons was somehow connected to the stars on his uniform.

Stay tuned for hot and heavy romance in Glenn’s letters to Selma beginning in January, 1944. Navigator training wasn’t nearly as fascinating as she was.

I am deeply disturbed by the images I saw this morning of the detention centers on the border towns in the Rio Grande Valley in my home state of Texas. Since I am lost in the 1940s these days, the pictures are reminiscent of the children being separated from their mothers and fathers in concentration camps in Nazi Germany.

I cannot believe this current policy is who we are as a nation. Neither Pretty nor I accept this inhumane treatment perpetrated in the name of the law of the land. Not our land. Not our laws.

President Franklin Delano Roosevelt in his third inaugural address to Congress in January, 1941 outlined what he called the four essential human freedoms:

“In the future days, which we seek to make secure, we look forward to a world founded upon four essential human freedoms.

The first is freedom of speech and expression — everywhere in the world.

The second is freedom of every person to worship God in his own way — everywhere in the world.

The third is freedom from want — which, translated into world terms, means economic understandings which will secure to every nation a healthy peacetime life for its inhabitants — everywhere in the world.

The fourth is freedom from fear — which, translated into world terms, means a world-wide reduction of armaments to such a point and in such a thorough fashion that no nation will be in a position to commit an act of physical aggression against any neighbor– anywhere in the world…

Sometimes we fail to hear or heed these voices of freedom because to us the privilege of our freedom is such an old, old story.”

America has been the voice and example of freedom since 1776. We have fought wars to protect freedom, to offer opportunity and hope for those who have no hope. The huddled masses are knocking at our door again in 2018. Let them in.

Sheila Morris is a personal historian, essayist with humorist tendencies, lesbian activist, truth seeker and speaker in the tradition of other female Texas storytellers including her paternal grandmother. In December, 2017, the University of South Carolina Press published her collection of first-person accounts of a few of the people primarily responsible for the development of LGBTQ organizations in South Carolina. Southern Perspectives on the Queer Movement: Committed to Home will resonate with everyone interested in LGBTQ history in the South during the tumultuous times from the AIDS pandemic to marriage equality. She has published five nonfiction books including two memoirs, an essay compilation and two collections of her favorite blogs from I'll Call It Like I See It. Her first book, Deep in the Heart: A Memoir of Love and Longing received a Golden Crown Literary Society Award in 2008. Her writings have been included in various anthologies - most recently the 2017 Saints and Sinners Literary Magazine. Her latest book, Four Ticket Ride, was released in January, 2019. She is a displaced Texan living in South Carolina with her wife Teresa Williams and their dogs Spike, Charly and Carl. She is also Nana to her granddaughter Ella James born 10-01-2019. Born in rural Grimes County, Texas in 1946 her Texas roots still run wide and deep.
View all posts by Sheila Morris →
This entry was posted in Humor, Lesbian Literary, Life, Personal, politics, racism, Reflections, Slice of Life, The Way Life Is and tagged FDR and the four freedoms speech, gunnery school, immigration policy on separation of families, major general g.c. brant, navigators, World War II. Bookmark the permalink.