Don’t get me wrong. The men whose stories were included in Southern Perspectives on the Queer Movement: Committed to Home are just as important as these women I celebrate today, but it is Women’s History Month after all. As I wrote in the Prologue of the book: “The narratives in this collection tell the stories of ordinary people who became extraordinary in our struggles for equality in a place and time that made change seemingly impossible.”Ordinary women and men became extraordinary as they organized the LGBTQ grass roots movement in a hostile environment from the HIV/AIDS pandemic in the 1980s to marriage equality in 2014….and beyond. The fight continues.

Candace Chellew-Hodge, the current pastor of Jubilee! Circle and one of the co-hosts of the first LGBTQ radio show in South Carolina which began in 2005, Rainbow Radio, had this to say about that experience in Southern Perspectives: “[On Rainbow Radio] for the first time, a long-silenced group of citizens was granted access to the microphone, and their stories of hiding, living in shame, and feeling condemned by their God and their family were at once heartbreaking and revolutionary. They were stories of hardship, trial, tears, laughter, triumph, and joy, even in the mist of oppression and despair.”

In the fall of 1980, according to Harriet Hancock’s essay in Southern Perspectives, her son Greg came out to her with the support of Harriet’s sister Diane who was very close to her nephew. With the words Mom, I’m gay, Harriet’s life changed forever. Greg was the middle child of her three children. He was enrolled at the University of South Carolina – along with Harriet who at 44 had decided to go back to college to become an attorney.

“My heart broke for him, but somehow I managed to keep my composure. I sat down, and with a sigh of relief, I said, “Is that all?’…I don’t think we consider the struggle that many gays and lesbians have in overcoming their own internalized homophobia. Unfortunately some never make it.”

Now known in South Carolina as the Mother of Pride for her activism in organizing the first Pride Marches in Columbia in the early 1990s and countless other outrageous acts and everyday rebellions against social injustice during the next 30 years, the Harriet Hancock LGBT Community Center was named to honor her commitment to the queer community and continues to be a beacon of enlightenment for youth and adults in all segments of the population. 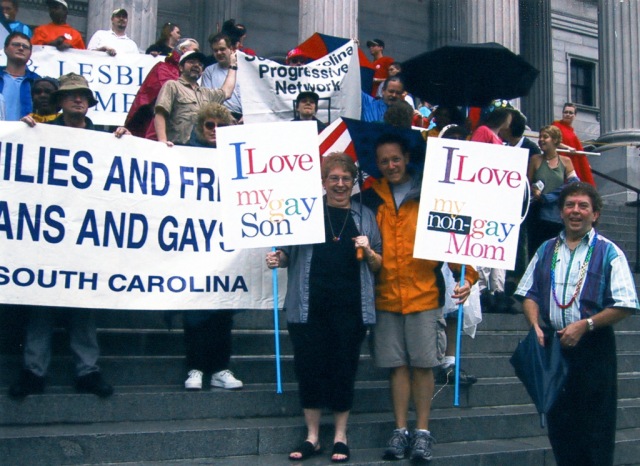 “My phone rang at midnight…[An older gay man] told me I was a troublemaker for organizing the march and how it would make more trouble for gay people…The last thing he said to me was ‘There will be blood running down Main Street tomorrow, and it will be on your hands.'” – Harriet Hancock in Southern Perspectives

Thankfully, the caller was wrong, and those empowered standard bearers became the catalysts for change in South Carolina and kept marching every year –  all the way to the nation’s capitol a few years later.

“In 1993 I went to Washington, DC, for the national march….I stayed outside the city and took the subway to the Mall. I heard people getting excited on the train on the way to the mall, and it sounded like a symphony orchestra to me. By the time I walked up the stairs from the train and stepped out in the sunlight, it was as if the drums and tympani were exploding.” – Deborah Hawkins in Southern Perspectives

By the time Deborah marched in DC in 1993, she had owned and operated a lesbian bar near the railroad tracks in Columbia since March, 1984. “I was thinking we needed a place where women could gather. We needed a country club, a place where we could get together for more reasons than just beer and such. I felt like it was my home, and I wanted people to come in and be happy. I was the hostess. I wanted the women to have somewhere to go, because a lot of them were lacking someone in their life to let them know they were loved. I could see…they were different and felt the difference, and I wanted them to know that I cared about them and loved them. That was my goal for opening Traxx.” — Southern Perspectives

Candace once thought of South Carolina as a place you went through when you were driving someplace else. Nevertheless, she moved from Atlanta to Sumter in 2003 in search of a new family life that led her to become a reluctant apostle to the LGBTQ people of faith in the midlands for the next 15 years. Harriet was born in 1936 and raised in Columbia in a house built on land deeded to her family in 1784. A disastrous 25-year marriage to a troubled man led her away from the state but her determination to make a better life for herself and her children brought her home in 1978 to her larger family in Columbia that loved and supported her. Deborah’s family lived in the same house in West Columbia from the time she was born until the day she left for college. As a young adult in the 1970s, she hitchhiked around Europe for six weeks with three friends, all planning to never come back home. Riding around in a van through the Transylvania forest at a hundred miles an hour on the Autobahn,  the group of four travelers realized they’d gotten in the wrong vehicle. It was time to go home.

These women were ordinary women who became extraordinary  – their stories are remarkable.  They heard voices crying for help in a wilderness of needs in a state smothered by conservative rural  leadership. Here are we, they answered. We won’t leave you, but we will work for change.

Stay tuned for the conclusion.

Sheila Morris is a personal historian, essayist with humorist tendencies, lesbian activist, truth seeker and speaker in the tradition of other female Texas storytellers including her paternal grandmother. In December, 2017, the University of South Carolina Press published her collection of first-person accounts of a few of the people primarily responsible for the development of LGBTQ organizations in South Carolina. Southern Perspectives on the Queer Movement: Committed to Home will resonate with everyone interested in LGBTQ history in the South during the tumultuous times from the AIDS pandemic to marriage equality. She has published five nonfiction books including two memoirs, an essay compilation and two collections of her favorite blogs from I'll Call It Like I See It. Her first book, Deep in the Heart: A Memoir of Love and Longing received a Golden Crown Literary Society Award in 2008. Her writings have been included in various anthologies - most recently the 2017 Saints and Sinners Literary Magazine. Her latest book, Four Ticket Ride, was released in January, 2019. She is a displaced Texan living in South Carolina with her wife Teresa Williams and their dogs Spike, Charly and Carl. She is also Naynay to her two granddaughters Ella and Molly James who light up her life for real. Born in rural Grimes County, Texas in 1946 her Texas roots still run wide and deep.
View all posts by Sheila Morris →
This entry was posted in Humor, Lesbian Literary, Life, Personal, photography, politics, racism, Reflections, Slice of Life, The Way Life Is and tagged Candace Chellew-Hodge, Deborah Hawkins, Harriet Hancock, harriet hancock LGBT community center, march on washington in 1993, pride marches, southern perspectives on the queer movement committed to home, traxx lesbian bar in columbia sc. Bookmark the permalink.