ROAD TRIP! GRANDBABY ON BOARD!

Over the spirited reservations of both Papa Williams (NanaT’s father) and NanaSlo (me), NanaT (Pretty) moved full steam ahead with her plans for our granddaughter’s first car trip “up the road” as we say in our family whenever we drive to the upstate foothills of the Blue Ridge Mountains in Landrum.  Mama Caroline gave NanaT just the encouragement she needed to override my worries about packing our grandbaby Ella who is just 11 weeks old today into the back seat of our old Toyota Camry yesterday for the wild adventures of her first road trip.

I’m wondering what this contraption is?

Thank goodness I have my cap, blanket and favorite pacifier. 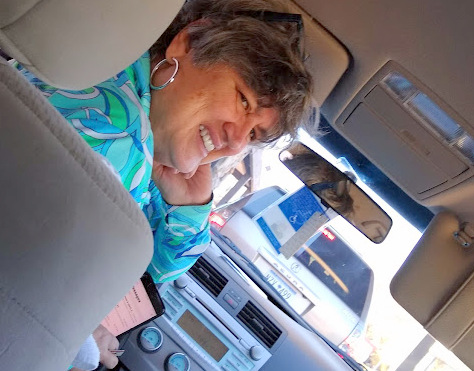 My NanaT has the prettiest smile – 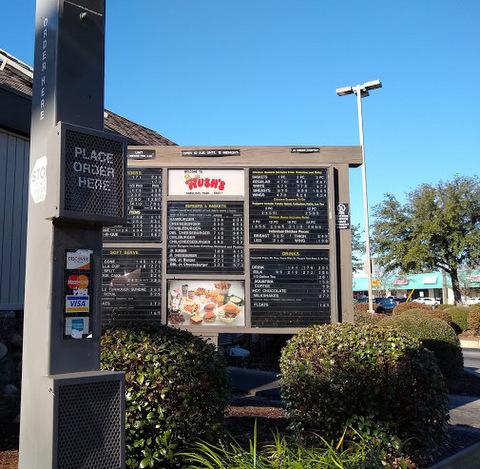 NanaSlo whispered to me that NanaT never went anywhere without

picking up an unsweet iced tea from Rush’s 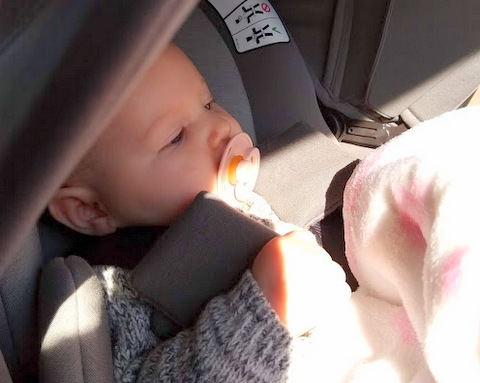 If I could walk, I’d stage a protest march.

Hey, hey, ho, ho – facing backwards has got to go. 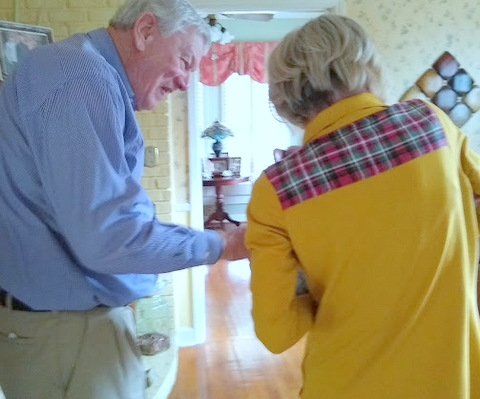 Papa Williams and his wife think I’m a Rock Star!

Aunt Darlene thinks I’m up to the challenge, though

and got back in the car to go home.

to feed me my last bottle.

Did somebody say Last Bottle?

Get me outta here, Percy.

And so we did get Baby Ella home safely last night after an awesome day with lots of smiles from everyone in the upstate. NanaT was brave to make this first trip, and I freely admit my trepidations were unnecessary. Ella is a trooper just like her NanaT. They are lucky to have each other. I predict many more trips to the upstate and look forward to sharing our love of the foothills and family with our granddaughter.

Sheila Morris is a personal historian, essayist with humorist tendencies, lesbian activist, truth seeker and speaker in the tradition of other female Texas storytellers including her paternal grandmother. In December, 2017, the University of South Carolina Press published her collection of first-person accounts of a few of the people primarily responsible for the development of LGBTQ organizations in South Carolina. Southern Perspectives on the Queer Movement: Committed to Home will resonate with everyone interested in LGBTQ history in the South during the tumultuous times from the AIDS pandemic to marriage equality. She has published five nonfiction books including two memoirs, an essay compilation and two collections of her favorite blogs from I'll Call It Like I See It. Her first book, Deep in the Heart: A Memoir of Love and Longing received a Golden Crown Literary Society Award in 2008. Her writings have been included in various anthologies - most recently the 2017 Saints and Sinners Literary Magazine. Her latest book, Four Ticket Ride, was released in January, 2019. She is a displaced Texan living in South Carolina with her wife Teresa Williams and their dogs Spike, Charly and Carl. She is also Nana to her granddaughter Ella James born 10-01-2019. Born in rural Grimes County, Texas in 1946 her Texas roots still run wide and deep.
View all posts by Sheila Morris →
This entry was posted in Humor, Lesbian Literary, Life, Personal, photography, politics, racism, Reflections, Slice of Life, sports, The Way Life Is and tagged blue ridge mountains, foothills of the blue ridge mountains, granddaughter's first road trip, rush's iced tea. Bookmark the permalink.

9 Responses to ROAD TRIP! GRANDBABY ON BOARD!