In the tiny Sears Roebuck kit house I grew up in, boundaries were both invisible and highly visible. The home was owned by my maternal grandmother and shared with two of my mother’s adult brothers in addition to my daddy, mother and me. The home was crowded. When I think back on it, I don’t know how we all managed to eat and sleep there – not to mention the scheduling of everyone’s turn in the single bathroom which barely had space to turn around to close the door after entering. That room was tight, and boundaries were tightly defined.

While the home itself was small, the lot on which it sat was large, a corner lot with an unattached garage (with an attached outhouse that may help explain the bathroom scheduling inside) behind the house. Beyond the garage a small pond which we called a tank in rural Texas lay quietly in an “in-town” pasture that had no fences. My back yard was spacious, vast in a small child’s mind, unique in comparison to the other small frame houses sitting on the few dirt roads that connected them.

Although the tank wasn’t very big, the fish and frog population that lived there mysteriously thrived, encouraging our relatives from the bigger cities of Houston, Dallas, Rosenberg, et.al., to make regular fishing trips to our place “in the country.” They came with their poles, rods, reels, live and artificial bait to try to land Ol’ Biggie, the name my Uncle Toby gave to the wiser large perch and catfish that proved elusive most of the time. During those early years I preferred running around the banks of the tank with my cousins to dropping a line with a squiggly worm in the water.

At random times, though, I made an exception to enjoy the company of a full-bodied black woman named Pearl who walked across another invisible line to come fishing in our tank. One paved road we called main street distinctly divided black and white people in my community in those days in the late 1940s and early 1950s;  that street should have been painted blood red. Pearl lived in an area of town on one side of the street I knew simply as The Quarters. I would be much older when I realized the name referenced slave quarters that still separated her world from mine.

Pearl told me the best stories about all the fish she had caught in the hottest fishing holes around the county. I believed every word she said because I trusted the deep rich voice that spoke. Pearl and my grandmother were good friends who visited together whenever she got ready to leave with her bucket full of fish. Pearl had the best luck catching perch in our tank – never very large – but she bragged that the little ones were better to fry anyway. Made sense to me. My mother also adored Pearl which surprised me since Mama didn’t adore anyone including herself.

Pearl Harris was the first black person in my life. She was warm, affectionate, funny and always kind to me. I have no idea how she came to be friends with my grandmother. I suspect they met in the general store in town where my grandmother clerked. Whatever the circumstance, I felt their friendship was authentic. They were easy with each other. I now know Pearl’s walk across the invisible racial divide to our fishing tank was not only brave but necessary to put food on the table for her family. My grandmother could relate to that need, too.

Wanda Sykes says in her Netflix comedy routine that I’ve watched at least four times now, seriously, at least four, that all white people need to have at least one black person who is their friend. Wanda thinks that friendship just might be a starting point to heal the racial divide that is at the center of income inequality and a host of other problems in our country. From a little girl growing up in a Texas town big enough for only one general store but large enough to contain two worlds separated by skin colors of black and white, I say I couldn’t agree more, Wanda. Bravo. 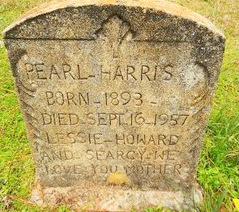 You may remember this post from last year. I will remember Pearl for a lifetime.

Sheila Morris is a personal historian, essayist with humorist tendencies, lesbian activist, truth seeker and speaker in the tradition of other female Texas storytellers including her paternal grandmother. In December, 2017, the University of South Carolina Press published her collection of first-person accounts of a few of the people primarily responsible for the development of LGBTQ organizations in South Carolina. Southern Perspectives on the Queer Movement: Committed to Home will resonate with everyone interested in LGBTQ history in the South during the tumultuous times from the AIDS pandemic to marriage equality. She has published five nonfiction books including two memoirs, an essay compilation and two collections of her favorite blogs from I'll Call It Like I See It. Her first book, Deep in the Heart: A Memoir of Love and Longing received a Golden Crown Literary Society Award in 2008. Her writings have been included in various anthologies - most recently the 2017 Saints and Sinners Literary Magazine. Her latest book, Four Ticket Ride, was released in January, 2019. She is a displaced Texan living in South Carolina with her wife Teresa Williams and their dogs Spike, Charly and Carl. She is also Naynay to her two granddaughters Ella and Molly James who light up her life for real. Born in rural Grimes County, Texas in 1946 her Texas roots still run wide and deep.
View all posts by Sheila Morris →
This entry was posted in family life, Lesbian Literary, Life, Personal, politics, racism, Reflections, Slice of Life, The Way Life Is, The Way Life Should Be and tagged fishing, longstreet cemetery montgomvery county texas, racism, rural family life, sears catalog kit houses, segregation, slave quarters, slavery, texas tanks, wanda sykes. Bookmark the permalink.