Twenty-four-year-old Violet Jessop, the daughter of Irish immigrants who lived in Argentina when she was born in 1887, worked as a steward on board RMS Olympic, the largest civilian luxury liner of its day,  when it collided with the British war ship HMS Hawke on September 20, 1911. The ship returned to its port at Southampton in England without sinking and with no fatalities.  Seven months later Jessop was hired to work aboard the RMS Titanic which set sail on April 10, 1912 and famously sank four days later after striking an iceberg in the North Atlantic. Violet escaped via lifeboat in that historic accident which took the lives of more than 1,500 people.

Despite surviving two dangerous threats to her life at sea, Violet became a stewardess for the British Red Cross during WWI on a hospital ship  HMHS Britannic that had been converted from a commercial liner. On November 21, 1916 the Britannic sank in the Aegean Sea and took 30 lives out of the thousand on board. Again, Violet Jessop survived – this time by jumping from a lifeboat threatened by the ship’s propellers. 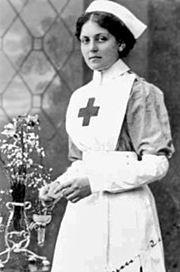 What drew me to the Wikipedia stories and the piece by Katie Serena in History Science News that were my sources today was the concept of women who survive…whatever life throws at us. Most won’t be on a huge ship about to sink in the Atlantic Ocean like Violet was when she was such a young woman; but all of us face difficulties throughout our lives that threaten to drown, overwhelm, instill fear, panic, the desire to escape. Sometimes our lifeboats hang by ropes of uncertainty amid the shipwrecks that interrupt smooth sailing.

And yet, the poet Garth Brooks reminds us not to “sit upon the shoreline and say you’re satisfied…choose to chance the rapids and dare to dance that tide.” – The River

Sheila Morris is a personal historian, essayist with humorist tendencies, lesbian activist, truth seeker and speaker in the tradition of other female Texas storytellers including her paternal grandmother. In December, 2017, the University of South Carolina Press published her collection of first-person accounts of a few of the people primarily responsible for the development of LGBTQ organizations in South Carolina. Southern Perspectives on the Queer Movement: Committed to Home will resonate with everyone interested in LGBTQ history in the South during the tumultuous times from the AIDS pandemic to marriage equality. She has published five nonfiction books including two memoirs, an essay compilation and two collections of her favorite blogs from I'll Call It Like I See It. Her first book, Deep in the Heart: A Memoir of Love and Longing received a Golden Crown Literary Society Award in 2008. Her writings have been included in various anthologies - most recently the 2017 Saints and Sinners Literary Magazine. Her latest book, Four Ticket Ride, was released in January, 2019. She is a displaced Texan living in South Carolina with her wife Teresa Williams and their dogs Spike, Charly and Carl. She is also Naynay to her two granddaughters Ella and Molly James who light up her life for real. Born in rural Grimes County, Texas in 1946 her Texas roots still run wide and deep.
View all posts by Sheila Morris →
This entry was posted in Humor, Lesbian Literary, Life, Personal, photography, politics, racism, Random, Reflections, Slice of Life, sports, The Way Life Is and tagged british red cross, garth brooks the river, hmhs britannic, hms hawke, katie serena, rms olympic, rms titanic, violet jessop, wwi. Bookmark the permalink.

4 Responses to lessons in survival: the unsinkable Violet Jessop