I first published this post in August, 2015 but I still love it. My dogs have always been my best teachers about what truly matters. I learned that from my daddy.

From the time I was five or six years old growing up in rural southeast Texas in the 1950s, my daddy used to take me with him to hunt quail during what I remember as a relatively short season in the late fall and winter months. Quail lived in coveys in fields in the countryside around us and were excellent at hiding from their enemies in the tall grasses that would become hay when baled. You could walk and walk and walk some more until you felt like your legs were going to fall off if you had to put one foot ahead of the other again, but the quail were always one step ahead of you unless you had help locating them.

Enter the hunter’s best friend: the German short-haired pointer a/k/a in Grimes County, Texas as the bird dog. A good bird dog could run through a field sniffing and sniffing, sometimes whining, until he caught a whiff of a covey of quail; then he would stop, raise his right front leg to a ninety-degree angle,  curl his medium-length tail over his back and point his nose exactly in the direction of the covey. He remained in this precise position until the hunter walked up beside the dog which would cause the quail to take flight with the sound of their fluttering wings making a whoosh noise as they left the ground.

Whoosh! Bam! It was over that quick. The covey rose from the ground cover, and my daddy would shoot his twelve-gauge shotgun. Occasionally a bird would fall, and I would run to retrieve it and put it in my jacket to take home to my grandmother who would be happy to fix it for our supper. We rarely got our  legal limit, but we would usually have enough for a meal.

The problem my daddy had was he never had a “good” bird dog.  He got the puppies from different people  in the area who always assured him their dogs were the best in the field, but invariably the pointer he got didn’t respond well to training. A common trait Daddy’s dogs had was rather than stopping to point and hold their position, they would  stop to point for a split second and then run as fast as they could to try to catch the birds by themselves. Of course, the quail would take flight when they heard the dogs and be long gone out of  shooting range by the time we caught up with the dogs. Daddy would halfheartedly fuss – but the dogs rarely improved.

As I think back on this now, I believe our dogs had an identity issue which caused their lackluster performance in the field. Whether they did well or not in the hunting arena, they were fed regularly with  delicious scraps from our table (dog food wasn’t on Daddy’s radar screen), petted and hugged on an equally regular basis. They came indoors for their pets and Daddy often scooped the big dogs up to hold them on his lap while he talked to them about their shortcomings. My daddy was a very diminutive man – about five feet six inches tall – and those dogs weighed almost as much as he did. They looked at him with adoring eyes and absolute trust…and seemed to be saying I promise I’ll do better next time…but they wouldn’t. 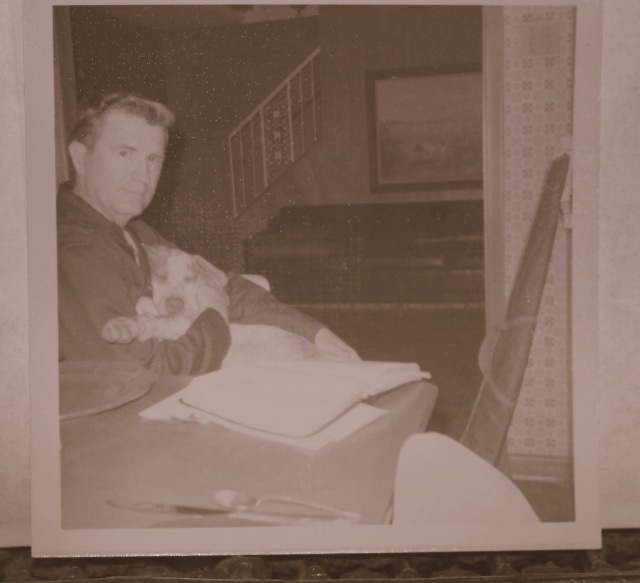 Daddy with what he loved most – his dog and his Bible

My daddy loved his bird dogs. We always had at least one dog in our family for as long as I can remember and at one time when I was in high school, we had three.  I know that for sure because I still have the original oil paintings he commissioned  at that time from an artist friend of his. 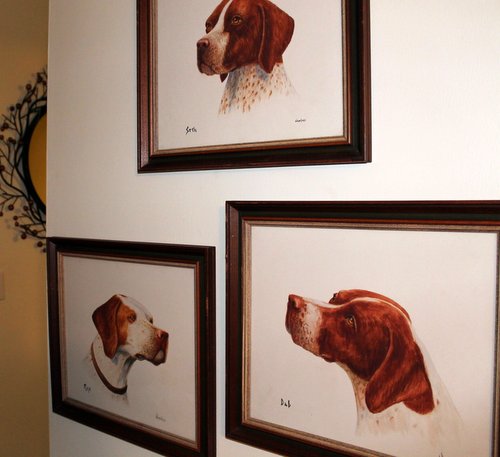 No wonder I love my dogs. I’ve never personally owned a bird dog, but I’ve been on the receiving end of the adoring eyes and plaintive expressions of more than a few dogs of my own throughout my adult life. I confess to holding them on my lap if I can scoop them up, but even if I can’t do that, I will give them lots of love and kisses whenever and wherever they will stand  or sit or lie down to be so smothered.

Loving dogs – or any animal for that matter – is the gift that keeps on giving to us mere humans, but the gift comes with a high price tag because their lives are relatively short. Indeed,  it seems the older we are, the faster we lose them.

Two of our three remaining dogs that have given us much more loyalty and adoration than we deserve over the past decade have now been diagnosed with cancers that will ultimately take them from us. What I have learned from them is that they both keep their pain to themselves without complaints. They are not troubled by wondering why they are in their particular situations, and I think this allows them to try to keep changes in their routines to a minimum. They like to roll the way they’ve always rolled if they possibly can.

I am a contemplative person – I can’t help myself. I find I can spend a great deal of time trying to figure out “why” this happened or that took place. Unfortunately, discovering “why” doesn’t necessarily lead to productive change. As a matter of fact, the opposite is likely to occur. So when I find myself in a position similar to the ones my dogs are facing today, I hope I have learned my lessons from the examples they have set for me and focus less on “why” and more on “so what.”

P.S. My daddy never asked anyone to make an oil painting of me.

Sheila Morris is a personal historian, essayist with humorist tendencies, lesbian activist, truth seeker and speaker in the tradition of other female Texas storytellers including her paternal grandmother. In December, 2017, the University of South Carolina Press published her collection of first-person accounts of a few of the people primarily responsible for the development of LGBTQ organizations in South Carolina. Southern Perspectives on the Queer Movement: Committed to Home will resonate with everyone interested in LGBTQ history in the South during the tumultuous times from the AIDS pandemic to marriage equality. She has published five nonfiction books including two memoirs, an essay compilation and two collections of her favorite blogs from I'll Call It Like I See It. Her first book, Deep in the Heart: A Memoir of Love and Longing received a Golden Crown Literary Society Award in 2008. Her writings have been included in various anthologies - most recently the 2017 Saints and Sinners Literary Magazine. Her latest book, Four Ticket Ride, was released in January, 2019. She is a displaced Texan living in South Carolina with her wife Teresa Williams and their dogs Spike, Charly and Carl. She is also Nana to her granddaughter Ella James born 10-01-2019. Born in rural Grimes County, Texas in 1946 her Texas roots still run wide and deep.
View all posts by Sheila Morris →
This entry was posted in Humor, Lesbian Literary, Life, Personal, photography, politics, racism, Random, Reflections, sexism, Slice of Life, sports, The Way Life Is and tagged bird dogs, german short-haired pointers, my daddy and his dogs, quail hunting. Bookmark the permalink.