how could I skip when I was two and seventy

Three years ago I published these reflections (with pictures) a week before my 72nd. birthday. I don’t know why, but I thought they deserved a second read. We’ll see what you think?

I had a very sweet Happy Birthday message today on my Columbia High Class of 1964 (Texas) message board from one of my boyfriends who I noticed sent me birthday greetings for the past 3 years on this website which I never check. Thanks so much to Tim for remembering me. I immediately went to Facebook and added him as a friend so that I can send him birthday greetings on whatever day his might be. I confess I have been remiss in wishing others a Happy Birthday unless I am prompted to do so by the Big Brother of Facebook who is forever watching over me.

I am struck by how soon my 72nd. birthday will be…April 21, one week from today. Sweet Lady Gaga, as The Red Man famously said, how did this happen. My first birthday card came from my personal Medicine Man Dr. Martin and his entire staff. These are the people who see me most frequently, and I appreciated the Life is Meant to Live and be Celebrated sentiments. I figure if they’re hopeful for my future, I should be, too.

I’ve received not one, but two, birthday cards from former President Jimmy Carter and the Carter Center, both of which were quite lovely and one signed by the President himself. Why two, you might ask, as I did. And then, of course, my bank ATM machines have been unusually prompt on good wishes whenever I’ve made withdrawals in April which I assume has something to do with their corporate guilt for the outrageous service charges they favor me with every month.

The message board for the 1964 Columbia High School graduating class in West Columbia, Texas took me back 54 years to that senior year when I was about to graduate from high school and leave my little town of Brazoria, Texas that was 15 miles from the Gulf Coast for summer school at the University of Texas in Austin 90 miles away. Big changes were on the way for me, but take a look at the images of my senior year when I was voted by my fully segregated all white 90+ students class as the Best All Round favorite, or as my dad invariably teased me by saying, she was the best all the way around.

Return with me to those thrilling days of yesteryear when my mother was always so happy for me to be dating a boy. 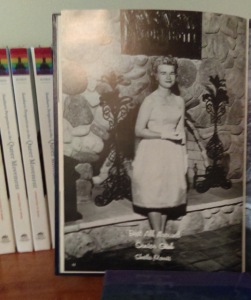 Note particularly the hands and feet

(Poor photographer – he must have spent hours on that pose) 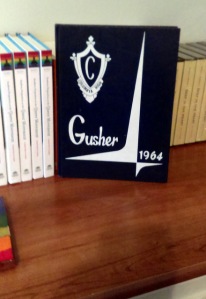 (our mascot was the Roughneck)

I am the one on the far left with fist pumped

(one of the original fist pumpers) 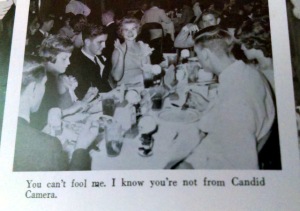 my mother rolled my hair until I left for college

I was calling a junior high basketball game.

Yes, that’s right.  A teenager in public with my hair rolled.

Mom made it a condition of my going to the gym.

Senior Follies – and they were

I sang an unremarkable rendition of the St. Louis Blues,

but the bright yellow fringe dress was memorable. 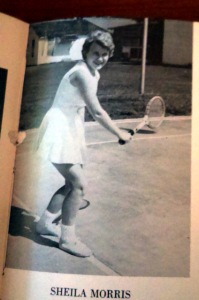 But I saw myself playing at Wimbledon.

as Coach Knipling used to say about my game,

Sheila is short and slow, but she can shoot a free throw

and of course, the political

deals were struck between me

and my good friend Leon

who made an awesome VP

The photos today are courtesy of me with my cell phone and my yearbook so quality leaves much to be desired, but you get the general idea of this 18-year-old baby dyke trying her best to be straight but  unknowingly about to add complexity to her sexual awareness through life in a women’s dormitory at the state’s largest university where the population of the dorm was greater than the population of the town where she grew up. Talk about trouble.

Sheila Morris is a personal historian, essayist with humorist tendencies, lesbian activist, truth seeker and speaker in the tradition of other female Texas storytellers including her paternal grandmother. In December, 2017, the University of South Carolina Press published her collection of first-person accounts of a few of the people primarily responsible for the development of LGBTQ organizations in South Carolina. Southern Perspectives on the Queer Movement: Committed to Home will resonate with everyone interested in LGBTQ history in the South during the tumultuous times from the AIDS pandemic to marriage equality. She has published five nonfiction books including two memoirs, an essay compilation and two collections of her favorite blogs from I'll Call It Like I See It. Her first book, Deep in the Heart: A Memoir of Love and Longing received a Golden Crown Literary Society Award in 2008. Her writings have been included in various anthologies - most recently the 2017 Saints and Sinners Literary Magazine. Her latest book, Four Ticket Ride, was released in January, 2019. She is a displaced Texan living in South Carolina with her wife Teresa Williams and their dogs Spike, Charly and Carl. She is also Nana to her granddaughter Ella James born 10-01-2019. Born in rural Grimes County, Texas in 1946 her Texas roots still run wide and deep.
View all posts by Sheila Morris →
This entry was posted in family life, Humor, Lesbian Literary, Life, Personal, photography, politics, racism, Reflections, sexism, Slice of Life, sports, The Way Life Is, The Way Life Should Be and tagged baby dyke, brazoria texas, coach knipling, columbia high school class of 1964, free throws, happy birthday wishes, president Jimmy carter, segregated high school in 1964, senior prom, university of texas in austin, wimbledon. Bookmark the permalink.