This post was originally made on December 31, 2012 – many of you might have missed it, and others will be reminded perhaps of what you were feeling on that New Year’s Eve almost ten years ago when you read it for the first time.

Through the good or lean years and for all the in-between years is a line from a Frank Sinatra classic All The Way. As I lay 2012 to rest for a final countdown before the ball drops in Times Square in New York City tonight, I ask myself to rate the year as good, lean or in-between. Understand this is a subjective, biased, prejudiced and totally personal evaluation. It meets none of the standards for any Academy of Anything and as such, is not subject to review by a replay official. I’m not sure if the year passed as quickly for you as it did for me, but I confess mine seemed to pass faster than a falling star so I hope you have a notated calendar to refresh your memories as mine does for me.

The first day of 2012 I was in Texas and spent New Year’s Day with my mother who lived in a personal care residence with two other older women and the two wonderful sisters who cared for all of them. She was in the severe stage of her dementia and, although I had no way of knowing it on that day, she wouldn’t survive the year;  neither would the other two women who shared the home and enjoyed my New Year’s visit. I’ve always loved women of any age, and these were some of the most entertaining ever.  It was a good start to the new year.

Whenever I’m in Texas I always have great visits with my favorite Aunt Lucille who lives in Beaumont, one of my least favorite Texas towns. My aunt will be ninety-three years old in 2013 and is an avid reader and crossword puzzle aficionado. She lives now in an independent living apartment in a retirement community in Beaumont. The nearness of neighbors and a standing dinner group of six women from her building in the late afternoon for dinner suit her social nature, her need to be out and about. Movies? Politics? TV shows? Books? Ask my aunt about any of these and she’s in her element with an attitude toward life that says hey take your best shot at me, but I’m hanging in for as long as I can. In 2012 I saw her more than a dozen times which was more than I’d visited her in one year…ever.  Each visit lifted my spirits and was just plain fun.

The year confirmed my status as a bi-stateual with extended periods of time in Texas and South Carolina plus keeping the roads hot from here to there and back. My partner Pretty traveled with me whenever she could get away from her job – I managed to coerce other friends to make the trip when she couldn’t go with me and refused to let me drive by myself any more. Even with my “new” eyes from a second cataract surgery in July, my truck bears the dents and dings of my parking misadventures and alas, let’s face it. I have a GPS but occasionally disagree with it, and then I find I am not there when I need me. I am somewhere else.

Pretty and I did some fun trips during 2012. At the end of February, which is our anniversary month, we drove to Valle Crucis, North Carolina, in the Blue Ridge Mountains for a couple of days of work and play. She worked.  I played.

Six months later in August we had a family vacation with our son Drew and his girlfriend Caroline. We drove to the northeast to sightsee and spend time together, to try to re-group from the losses earlier in the year. Abraham Lincoln blessed us in Gettysburg and we traveled safely to the shores of Maine, along the coast in Rhode Island, saw beautiful scenery in Pennsylvania and Connecticut. Boston was a hit for many reasons not the least of which was its good food. We counted on Caroline to make sure we ate at the best restaurants according to her online guides.  Iphones were in; Pretty and Drew had dueling GPSs that didn’t always want to go in the same direction. So many gadgets…so much confusion. So much merriment.

On my birthday in April I was at the funeral of the woman I knew as a second mother for over forty-five years. She and my mom were as close as sisters. They were both heartbroken when I had to separate them four years ago because they could no longer take care of each other. Willie Flora was eighty-two in March of this past year and my mom was eighty-five that same month. Willie died on April 14th in Richmond, Texas and my mom died eleven days later in Willis. It was sorrow upon sorrow. 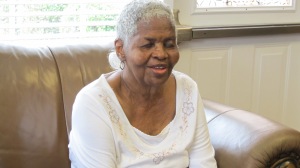 In September my neighbor Heather and I had a shower for another neighbor, Becky, who created additional excitement by announcing that her water broke a couple of hours before the shower was to start. High drama, but we moved the time up, she came and opened her gifts, had a piece of cake and was then whisked away by her husband Gary to the hospital where she gave birth to her third baby boy four hours later. George is growing by leaps and bounds and should be a fine nuisance for his older brothers Oscar and Dwight. 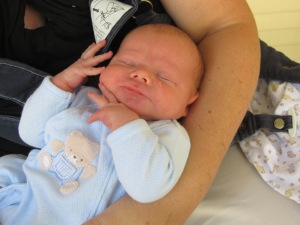 George in his New Baby phase

In November my third book was published and I was thrilled with how it looked when it came from the printer. I loved the cover and had a sense of accomplishment as I placed it in my office next to my first two books. I hope my cyberspace friends will want to read the final version since you’ve shared a number of the stories with me in the past year right here on this blog. There is freedom in growing older and a sense of entitlement to Call It Like You See It — and even sweeter to see what you’re calling in print

Good year? Lean year? In-between year? The votes have been tallied by an unreliable CPA (me) and I have to report the in-between has it. Births and deaths mark our beginnings and our endings, but the middle is what keeps our attention. I’ll lay 2012 down tonight and pick up 2013 in the morning. I can’t predict what will happen in the New Year, but I can predict I will struggle to stay awake to ring it in.

Pretty and I wish all of you a Happy and Healthy New Year!  Thanks for stopping by…

P.S. I would lose my favorite Aunt Lucille in 2013. I think of her often and am grateful for that Texas time with her.

Sheila Morris is a personal historian, essayist with humorist tendencies, lesbian activist, truth seeker and speaker in the tradition of other female Texas storytellers including her paternal grandmother. In December, 2017, the University of South Carolina Press published her collection of first-person accounts of a few of the people primarily responsible for the development of LGBTQ organizations in South Carolina. Southern Perspectives on the Queer Movement: Committed to Home will resonate with everyone interested in LGBTQ history in the South during the tumultuous times from the AIDS pandemic to marriage equality. She has published five nonfiction books including two memoirs, an essay compilation and two collections of her favorite blogs from I'll Call It Like I See It. Her first book, Deep in the Heart: A Memoir of Love and Longing received a Golden Crown Literary Society Award in 2008. Her writings have been included in various anthologies - most recently the 2017 Saints and Sinners Literary Magazine. Her latest book, Four Ticket Ride, was released in January, 2019. She is a displaced Texan living in South Carolina with her wife Teresa Williams and their dogs Spike, Charly and Carl. She is also Naynay to her two granddaughters Ella and Molly James who light up her life for real. Born in rural Grimes County, Texas in 1946 her Texas roots still run wide and deep.
View all posts by Sheila Morris →
This entry was posted in family life, Humor, Lesbian Literary, Life, Personal, photography, Random, Reflections, Slice of Life, The Way Life Is, The Way Life Should Be and tagged bi-stateual, boston, dementia, endings, happy new year, lesbian literature, memory care, new beginnings, new york city, times square. Bookmark the permalink.

2 Responses to The In-Between Years